The BF Goodrich Radial T/A (http://www.bfgoodrichtires.com/tire-…dial-t-a-tires) is about as good as it gets – and though it’s a good-looking tire, with handsome raised white lettering, the Radial T/A is not really a performance tire. It’s pretty much a basic all-season radial with a standard passenger car “S” (112 mph) speed rating and tread designed for normal street driving.

And that’s about all there is.

You can find standard radials, some with white lettering, some blackwall. But if you want a sticky-compound performance tire with an H (130 mph or better) speed rating, you’re going to find the cupboard’s pretty bare.

So how come no one makes performance tires for old muscle cars?

Well, they do make them – just not for the factory 14 and 15-inch steel rims those cars originally came with. You can get the same super-aggressive Michelin Pilots (or whatever) that come on a new Corvette or Mustang GT – provided you use modern large-diameter wheels.

At minimum, you’ll need to change up to a 16×8 rim in order to have access to modern performance tires for your old muscle car.

But that changes both the look of the car (for sure) and (very likely) will dramatically alter the way the car rides and handles – possibly not for the better, either. At least, not without making appropriate changes to the rest of the car’s suspension.

Keep in mind that the typical ’60s-era, 70s-era performance car was designed for 14 or 15 inch wheels (and tires appropriate to wheels that diameter and width). Just because a 17 or 18 inch tall rim physically fits doesn’t mean it’s right – or even safe – for the car. Before you contemplate such a swap, consult an expert or you could end up with a car that handles worse than it did with the factory 15×7 steelies and a set of 225/70-15 Radial T/As.

Much larger (taller/wider) wheels and tires will probably also increase rolling resistance as well as the car’s unsprung mass. Steering feel could become very screwy. Overlarge wheels/tires may end up rubbing inner fender wells or bottoming out whenever the car hits a pothole or dip in the road. It may be necessary to completely modify the factory suspension set up (springs, coils) and alter the geometry/camber, caster and all the rest of it – in order to get modern-sized wheels and tires to work right.

And they will never look right.

Not to me, at least.

As with ’60s and ’70s-era suspension geometry, the relationship of the car’s body lines and proportions to the size of the wheels and tires was based on the look of 14 and 15 inch rims – considered “large” back in the day. You can get away with a 16 inch rim, but 17 ad 18 inch wheels just look awkward on a classic-era muscle car – like colorizing classic movies from the ’30s.

The fact that it can be done doesn’t mean it should be done.

Sure, there’s a possible performance enhancement to be had – both in terms of handling and traction (a big issue for V-8 muscle cars). But modern large diameter rims all look pretty much the same. Can you think of a modern wheel that really stands out – is part of the car – in the way that something like Pontiac’s ’70s-era Honeycomb wheel or Chevy Rally rim stands out?

Most muscle cars came with factory wheels that defined the package and contributed greatly to making the car what it was. What is a Shelby GT500 without its factory Magnum 500 wheels? Or a ’71 GTX sans its Hurst mags? These wheels may be small by modern standards, but they have a style – and history – that you throw into the dumpster when you take them off the car in favor of a set of look-alike chromed-generic ree-uhms that every other pimped-out Escalade is also riding on. 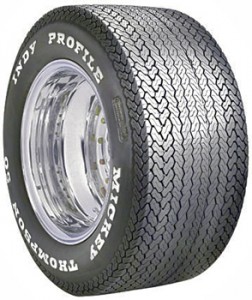 But that brings us back to the dilemma of finding a decent tire – for the factory wheels – that’s worthy of the capabilities of a classic muscle car. Coker and other suppliers are remanufacturing OE-type tires for numerous classic cars, including classic muscle cars. This is a relatively small potential market, but apparently, there’s enough interest to make it economically worthwhile. I think there are probably enough of us out there with muscle cars we still like to drive (as opposed to just trailer to high-end car shows) to make it worthwhile for an outfit like Coker (or maybe even BF Goodrich) to make us some decent tires to fit our cars’ stock/factory rims.

But we need to make our wants known for this to happen. So, if you feel like I do and would like to be able to buy a performance tire to fit your muscle car’s factory wheels, drop ’em a line and let ’em know. The two most likely prospects are BF Goodrich and Goodyear, both of which used to make great tires for American muscle cars but don’t anymore.

Maybe they will again, if we raise enough of a ruckus…

Reader Question: Water in the Intake?

Reader Question: To Rivian or Not?