In this case, it was just a minor – but messy – thing. The air conditioning pressure-side hose developed an ominous-looking, Oprah-like bulge where the hose casing was starting to fail; refrigerant and oil under pressure had begun to seep out, making an oily, goopy mess of my detailed engine bay.

Luckily I had what I needed in the trunk to deal with it – some rags and spray cleaner (to wipe up the mess and then clean my hands so I didn’t get the goop all over my car’s steering wheel and interior). Plus a roll of electrical tape, which I used to wrap the weak point in the hose and keep more goop from leaking out.

Having a few such items on hand for just-in-case can make all the difference between a minor annoyance and a big pain in the rear; possibly even a much worse problem – such as a permanent grease spot on your once-pristine interior because you didn’t have what you needed to clean yourself up after a roadside repair.

Here are few things I’d never leave home (in an old car) without:

Old (all old cars) cars leak. They have carbs (instead of fuel injection) that sometimes backfire, which can easily lead to an engine fire. Old electrical systems short out or overheat. All sorts of potential ways to have a roadside barbeque. Most antique/classic car shows require that each vehicle on display be equipped with a fire extinguisher on hand. Common sense should motivate you to get one for your older car regardless. They make small ones specifically designed for cars. Get one rated to handle gasoline/chemical fires. And keep it in an easily accessible place where you can get to it quickly, such as behind the driver’s seat.

Duct tape can temporarily fix a leaking radiator hose and get you home instead of stuck by the side of the road. Electric tape works well, too – because it stretches and applies/holds pressure as you wind it around whatever you’re trying to knit back together. And it’s a godsend for temporarily fixing frayed wires – including repairing cracked/broken insulation that would otherwise create a short.

Get the gloves at a drugstore or auto parts store. They’re very thin, so you can work on the car without losing feel – and they’ll keep your hands clean, so you won’t ruin the car’s upholstery after you’re done. A tube/tub of a waterless hand cleaner such as Go-Jo is great to have with you, too. Use the rags to clean yourself up – or wipe stuff up.

Get one of those combo screwdriver deals that has multiple bits, ideally, stored in the handle. An adjustable crescent wrench, pliers and (if you have the space) a “custom” socket set containing the size sockets most commonly used in your car, such as 7/16, 1/2 and 9/16 (and so on). Don’t forget a powerful flashlight – and be sure the batteries are good.

This varies from car to car, but to get you thinking: An extra fan belt; a fuse set; a foot of fuel line hose in the correct diameter for your car – along with an extra set of clamps. A quart of oil; a quart of transmission fluid (if you have an automatic). Maybe an extra gallon jug of pre-mixed coolant, if your older car has any leaks at all. A can of Fix-a-Flat tire inflator.

* An old blanket or large towel –

You’ll be happy you have this if you need to crawl underneath the car; gravel hurts – and lying in mud just sucks. Or, use the towel to cover the driver’s seat/upholstery after you’re done fixing whatever broke. This will avoid you ruining your just-recovered seats with the oil/grime you got all over your backside.

You can put most of the stuff above into a duffel bag or gym bag and just toss it in the trunk. Since most people don’t use their classic/antique cars for getting groceries or carting stuff around, you probably won’t miss the lost trunk space.

But you will be very happy to have your “kit” when something does go wrong. Which it will, inevitably.

That’s just part of the fun of owning an old car! 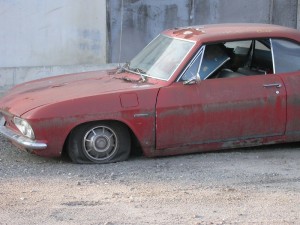