What’s the point of all these 160 mph speedometers?

Almost every new car I test drive (including four-cylinder economy cars) has a speedometer that reads to at least 120 mph.

And the cars could, in theory go that fast.

But of course, they almost never do.

Probably not one out of 100 cars (no matter how fast it could go) ever sees the high side of 120.

Not in the USA, anyway.

First, of course, it is feloniously illegal to drive that fast. Literally. Get caught anywhere near 120 and you are going to find yourself on the wrong end of a Glock and facing the very real possibility of jail time. Your license will be history, at the very least. You won’t be driving anything for some time to come; maybe not ever again.

Fact is in most states anything over 80 mph (or faster than 20 mph above the posted limit, regardless of the limit) is sufficient to get you plastered with a “reckless driving” charge. Six points on your record if  convicted; by-by reasonable insurance – for years to come. Figure at least a few hundred bucks in fines, too – plus the money for a shyster lawyer to defend you.

And that’s not even close to triple digits.

Second, few people have the balls – or the room.

How many people (yourself included) do you know who have ever, even once, honestly driven a car faster than 130 mph? Possibly one or two. And 150? Unless you’re a weekend racer (or know people who race – on race tracks) it is very unlikely you’ve ever even met someone who has driven that fast on public roads.

Third, it’s damn hard to do even if you have the balls (and the other necessary equipment) to make the run. Yeah, there are vast stretches of deserted, nearly flat highway that run for miles and miles in rural states like Nevada and Wyoming. But most of us don’t live in such places. Most of us live where there are other cars on the road, and where the roads are not nearly perfectly flat and straight, with great lines of sight, for literally miles on end. Which is what you must have to reach speeds much above 140 mph, even in a really fast car.

You simply run out of room – or time.

A Porsche 911 or Corvette Z06 will accelerate like a slingshot to about 140-ish before you start to notice a decline in your forward progress. Oh, the car is still building speed, but much less rapidly than it did from 0 to 100. Wind resistance is increasing with each mph; to get from say 150 to 170 will almost certainly take more time and road than you have available – again, balls aside.

Check out the speed runs at Bonneville. Those cars (some of them with 1,000-plus horsepower, or twice what a Corvette has) still need 2-3 miles of perfectly flat road to do their thing – and slow down with a reasonable cushion of safety.

I remember the old 85 mph speedometers. Do you? In the late ’70s, Congress thought people might be less tempted to really speed if the speedometer didn’t really tempt them. I had all kinds of fun twisting the speedo in my 1980 Camaro all the way back around to 5 or 10 mph – which was about 115 or so.

Maybe we were better off with more realistic goals in front of us…. 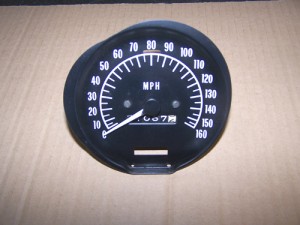