Steve McQueen’s Highland Green “Bullitt” Mustang is a pop culture icon. But how about the automotive Omarossas? Which movie and TV cars were the worst ever?

Now you know why Magnum was reduced to doing burnouts on the grass. The 308 may have a prancing horse on the fender – but there’s a Gerbil under the hood.

You can buy a nice one these days for about $20,000 – and that ought to tell you something.

A great movie – about a once-great car. There’s a reason why they speeded up the film in several driving sequences to make the action at least look fast. The ’77 T-top Trans-Am driven by Burt Reynolds may have been menacing in its black paint with gold trim – but all Burt had to work with was a low compression 185-hp 403 V-8 pirated from an Oldsmobile Delta 88 – and a sloshy three-speed automatic transmission. This was a 16 second quarter-miler, witha top speed around 110 mph, all out – Prius territory, but with 14 MPGs as your reward.

The stunt scenes – and sound track – were done with a modifed car equipped with a much-massaged 455 Pontiac V-8, an engine not offered in a Trans-Am since 1976 – and a real-deal 4-speed manual gearbox, in order to chirp the tires on the 1-2 upshift.

This sheetmetal cousin of the “hit me – and we die together” Pinto remains the undisputed Most Embarrassing Mustang Ever Built. It’s amazing Farrah was able to chase down any criminals in this tarted-up, toothless faux muscle car. They probably slowed down – so she could catch up.

The one admirable design feature of the Mustang II was its tendency to rapidly dissolve from rust – like an old soup can left out in the yard. Few are left in existence to blight the roads.

This car (“Zebrathree”) was an even bigger load than David Soul and Paul Michael Glazer. Like a washed-up jock in a baggy Addias sweat suit, the customized ’76 Torino was a typical mid-late ’70s overweight, underpowered smog machine. Its humungous 460 V-8 was a low performance boat anchor of an engine that spat out 200 hp from close to 8 liters if displacement. It was better at sucking gas than hauling ass.

A loud paint job and white stripes only called attention to its mediocre performance.

This unfortunate Ford was the el cheapo equivalent of a Chrysler Cordoba – only without the “rich, Corinthian leather” to class it up a little.

It’d be hard to get to the next stop light – let alone the future  – in this stainless steel road toad. With a feeble Renault-sourced 2.8 liter V-6 under the hood – and all of 130 hp on tap – Doc Brown would have had to stuff a lot of bananna peels into “Mr. Fusion” to get the car to 88 mph – the “magic number” for time travel.

Even with a “”flux capacitor,” Biff’s old Chevy would’ve blown its Gullwing doors off.

Take a perfectly good mid-’70s Corvette – and ruin it with a couple hundred pounds of slapped on fiberglass pontoons, wings and oversized hood scoops. Then spray thoroughly with garish metalflake paint and prisma. Put Mark “Luke Skywalker” Hamill in the lead role – and you’ve got all the makings of a first-class stinker of a movie about Corvette mutilation and ’70s stoner anomie.

The movie is all about finding the car after it got stolen by thieves – but the smarter move would’ve been to cash the insurance check and send the crooks a thank-you card.

The music and intro were pretty cool – especially the part where the car cuts under the tractor trailor – but the VW-sourced kit car Lola GT/Lotus wasn’t.

Even if it did have a Porsche engine (no one knows for sure; some say it was Corvair-powered) a fake exotic sports car is about as classy as Potomac River caviar.

You’re not foolin’ anyone, son. Put those gold chains away, tuck in your shirt – and buy a real car. 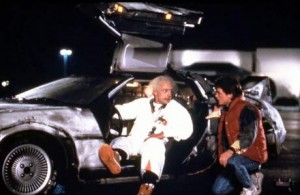