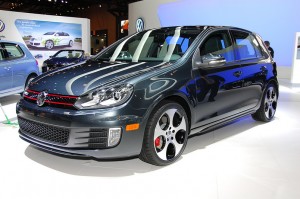 On the one hand, it’s an economy car – with an available turbo-diesel engine that can return more than 40 mpg on the highway (better than some hybrids).

On the other hand, it’s powerful and quick – with a standard 170 hp gas-burning engine that still manages to get 30 mpg on the highway.

No one else offers anything quite like it, which goes a long way toward explaining it popularity despite its slightly higher price relative to competitors.

The Golf is VW’s entry-level model. It’s a compact, front-wheel-drive coupe or sedan available with either gasoline or diesel engines. Prices start at $17,965 for the base 2.5 coupe and top out at $24,535 for a TDI (diesel) sedan.

The 2010 model was heavily revised, so changes for the 2011 model year are minimal.  Prices rise a couple hundred bucks across the board, though.

Snappy performance/crisp handling – even from base model.

Almost-hybrid fuel efficiency with optional TDI diesel – without the complexity or hassles of owning a hybrid, including down-the-road issues with the batteries.

Feels solid as the rock of Gibraltar.

Can be equipped with luxury-level amenities, including hard drive music storage and Bluetooth wireless.

Available as a coupe (a primary competitor, the Mazda3, isn’t).

Available as a sedan (the Mini Cooper, another competitors, isn’t).

Fairly pricey to start ; can get downright expensive if you add some of the available options.

Base model interior materials can be a bit bleak-looking. Exterior styling a bit bland compared with Mazda3 and Mini Cooper.

VW has had some issues with quality control.

Two engines are available in the golf. Standard is a 2.5 liter, 170 hp gas engine teamed with either a five-speed manual or a six-speed automatic.

The VW’s 2.5 liter engine is also quite economical. EPA rates the Golf equipped with this engine and five-speed manual transmission at 22 city, 30 highway. The base Mazda3 (with smaller, less powerful 2.0 liter engine) does only slightly better: 25 city, 33 highway. The flyweight Mini is cuter than your high school girlfriend and beats them both with an exceptionally thrifty 28 city, 37 highway – but its acceleration (0-60 in about 8.5-8.7 seconds) is lukewarm at best.

The Golf, meanwhile, is significantly quicker than the base Mini or the base model Mazda3: 0-60 in about 7.7-7.8 seconds with the five-speed manual.

But the Golf has another really strong selling point neither of its rivals can answer and that is the optional 2.0 liter turbocharged, direct injection (TDI) diesel engine. It produces V-6 levels of torque output (236 lbs.-ft., almost all of it available in the lower RPM range where most everyday driving is done) and can deliver 42 MPGs on the highway – by far the best mileage you’ll get in anything short of a gas-electric hybrid (or a motorcycle).

The TDI engine has the additional attraction of being inherently more durable than gas-burning engines. A diesel engine, assuming proper care, can be expected to run reliable for many hundreds of thousands of miles – which means your total ownership costs could end up being much lower, since you may not need another new car for the next 15-20 years.

The TDI Golf comes with a six-speed manual (standard) or (optional) a six-speed dual-clutch automatic (DSG). The DSG version is the one that gets best-case mileage of 42 highway (and 30 city) but manual versions still achieve a very impressive 41 highway (and the same 30 mpgs in city-type driving).

The TDI-equipped Golf isn’t as quick as the 2.5 liter Golf, but it’s 0-60 time of about 8.6 seconds is still almost exactly the same as the less fuel-efficient Mini Cooper and Mazda3 with 2.0 liter engine.

All Golfs are front-wheel-drive.

The Golf is quick enough to be sporty and has plenty of reserve power to execute fast passing/merging maneuvers comfortably and without straining. It also has quick steering response, too – and will corner with athletic poise at pretty high speeds.

The ride is firm, but not stiff (it is stiff – and bouncy – in the Mini Cooper and to a lesser extent, the Mazda3). Though the Golf is a small car, it feels extremely solid – a characteristic trait of German-built cars. Even cruising along at close to 90 mph, there is minimal road/tire/wind noise transmitted into the cabin and the car seems completely at ease and ready to go much faster (which of course it is designed to do, given Germany’s high-speed Autobahns). At legal U.S. speeds, the Golf feels understressed – like a powerful bodybuilder just warming up.

TDI versions launch with forcefullness, too. If you want, you can even squeal the tires. Few 40-plus mpg cars can do that. It is also quiet – whether idling in traffic or running 75 on the highway.

I could find no fault with either of the Golf’s available engines, both of which manage to be strong performers as well as very fuel-efficient. The transmission choices are also top-drawer. Manual enthusiasts will like that both engines can be teamed with a stick-shift, while going automatic involves no compromises of either performance/driving fun – or economy (DSG-equipped Golfs get the best mileage).

As mentioned above, the Golf’s two bodystyles (hatchback coupe and four-door sedan) gives it a selling advantage over its two chief rivals, the Mini Cooper (no sedan version) and Mazda3 (no coupe). It’s also nice that both versions have about the same interior space (more on this follows below).

The interior of the base Golf comes off as a little on the Spartan side in terms of initial impressions but the car is well-equipped as it sits with AC and most power options (windows, lock, cruise control) plus a very decent eight-speaker stereo with MP3 player. The bland-looking materials (dash cover/door panels, etc.) are however substantial-looking and panel fitment is superior.

Though you might expect the TDI version to be low-budget/economy-oriented it actually has more standard stuff than the base Golf – including 17 inch alloy rims, a premium audio system with touchscreen interface, Bluetooth wireless, fog lights – and a firmer-riding, sport-tuned suspension.

You can further dress out your Golf with leather, heated seats, GPS (bundled with music storage hard drive) Xenon HID headlights, a sunroof and other stuff – but be aware that some of these options are expensive and if you’re not careful you can end up with a Golf that’s pushing $30k.

Space-wise, the Golf (both versions) has more front-seat headroom (39.3 inches) than either the Mini (38.8 inches) or the Mazda3 (38.9 inches) and virtually the same front-seat legroom as the Mini (41.2 inches vs. 41.4 inches.) The Mazda3 has significantly more front seat legroom (42 inches) but the Golf beats the Mazda on rear-seat headroom (38.5 inches vs. 37.5 inches), while the Mazda has a bit more rear-seat legroom (36.2 inches vs. 35.6). The bottom line is that it will depend on your body type as far as which car feels roomier in the back.

The big point, though, is that the VW has useable back seats.

The Mini, on the other hand, doesn’t.

While the Mini has surprisingly generous room for front seat occupants its rear seats are Adult Unfriendly (just 29.9 inches of legroom) which severely limits its practicality relative to the VW (or the Mazda).

A nice touch in the Golf are the standard eight-way manual-adjust seats, which can be ratcheted up and down to accommodate shorter or taller drivers and which really improves the day-to-day usability of the car.

My only gripe is that VW doesn’t offer the excellent TDI diesel in a “basic” version of the Golf – perhaps even without power windows – which would lighten it up as well as lower its cost. An $18k TDI Golf capable of 44 mpg on the highway would be incredibly appealing.

There are pros and cons here. On the one hand, the Golf – especially the TDI-equipped version – is one of the most economical cars you can buy in terms of everyday fuel economy as well as potential down-the-road longevity. On the other hand, the VW’s base price of $17,260 is fairly steep relative to other economy-type but still-sporty cars you might buy, including the $15,295 (to start) Mazda3.

Also, VW has had a somewhat spotty record in recent years as far as minor gremlins such as problems with electrical systems. The New Beetle, in particular.

That said, the 2010 Golf is an all-new model and VW has hopefully worked out whatever issues plagued some its earlier models.

And to be fair, the Mini has had its own issues with quality/reliability, too.

The only extra-cost safety feature is back seat side-impact airbags (for the sedan; they’re not available in the coupe). Both coupes and sedans come standard with ABS, traction and stability control, front seat side-impact air bags and first and second row head/curtain air bags.

The Golf costs more than other entry-level sporty-economy cars but it offers superior power/peformance and (in TDI versions) outstanding fuel efficiency – which washes away much of the difference in up-front expenses.