For decades, it has been pretty easy to visually pick out cop cars from the crowd.

If you saw grey hair, wire wheel covers and AAA stickers on the bumper – you were in the clear. But the claxons immediately went off if the driver appeared to be a solo younger guy – and the car had dog dish hubcaps, a spotlight by the driver’s side window and multiple antennas.

We Americans have been immensely blessed in this respect. In most other countries, the cops drive ordinary cars, including cars you’d probably never suspect – like minivans. You never knew who might be in the car next to you. Whereas in the U.S., if you saw a Vic or an Impala tucked into one of those cutouts on the Interstate, you could be next-to-certain it was a Johnny and take appropriate precautions.

Well, the Impala (the real one – the one that looked like Shamu the whale) is already gone. Chevy stopped building them in the late ’90s and most departments have stopped using them. Many were rebuilt, with new engines and fresh drivetrains – but even these few holdovers are now getting tired. That leaves the current  (front-wheel-drive) Impala, the slightly smaller Malibu and the main standby in many areas around the country, Ford’s Crown Victoria sedan.

2011 will be the last year that Ford builds the Vic. So within five years or so, all the ones currently in service will be nearing retirement and the cops running speed traps will become all-but-invisible as they transition over to much-less-obvious “units” like the new police-spec Ford Taurus (http://www.worldcarfans.com/11003122…e-car-revealed).

The Crown Vic is slow. Even in “police interceptor” trim, anyone with some muscle under his saddle stands a decent chance of giving one the slip. I’ve got a neighbor who is a state cop. He drives a Vic. And he has told me he doesn’t even bother turning around when a high-performance sport motorcycle buzzes past him at Warp Speed because he knows there’s no point. By the time he gets his 220 hp Vic turned around, the bike (with a better power-to-weight ratio than a Porsche 911 turbo) will be in the next county and long gone.

But in the not too-distant future, he may be driving a police-spec Taurus SHO – complete with 365 hp twin turbo engine and 0-60 capability of about 5 seconds. The SHO Taurus (and similar pepped-up police package cars like the Dodge Charger R/T with Hemi V-8) can also run 150-plus on top.

This evens things up a lot. It will be harder to speed (and get away with it). And much more challenging to successfully flee.

There is one potential fly in the pie, though. And it might just save our (you knew it was coming) bacon. While slab-sided, full-framed, solid axle, rear-wheel-drive cop cars like the Vic were incredibly tough old tanks that could stand up to abuse such as driving over a curb at 40 mph in pursuit of a fleeing felon – or be used as mobile battering rams to knock suspects off the road – modern unibody front-wheel-drive/all-wheel-drive cars like the Taurus are much more fragile. Run one over a curb at 10 or 20 mph and it’s a sure bet the front end will need major work. Use it to play bumper cars and it will not end well.

The other issue is service and maintenance costs. A Vic is a relatively simple machine, even though it has a computer as all modern cars do. But underneath the wires and hoses is a straightforward V-8 with a pretty conventional automatic transmission and a tough, primitive, suspension system with a few basic components that are almost unbreakable and if they do break, are easy and inexpensive to replace. A new Taurus SHO has an amped-up DOHC V-6 engine with twin turbos and intercoolers; a very complex AWD system – and a sophisticated but relatively fragile chassis/suspension that wasn’t designed for daily abuse.

These facts may work in our favor. The cops may have to go back to a car more like the Vic – one that would also have the virtue of being more recognizable.

The old Rules of Engagement are about to change…. . 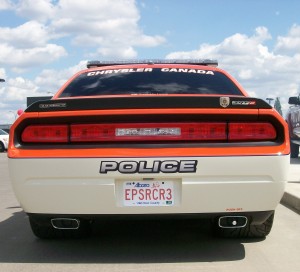