Cars aren’t always an entirely rational purchase. If they were, no one would buy a machine like the Acura ZDX. It’s pretty big outside – but fairly small inside, with hard to access back seats. It’s powerful – but not-so-quick – because its 300 hp engine has to lug around more than 4,400 pounds of steel and glass and plastic. It has a sophisticated AWD system, but isn’t really built for bad weather  – let alone off-road driving.

On the other hand, the thing does look the Batmobile come to life – menacing and techno and slick as a custom-fitted leather body suit.

Though it’s somewhat similar in size and layout and looks to BMW’s X6 and also the Infiniti FX, it doesn’t really fit into any existing category of vehicle. The ZDX is one of those very rare show or concept cars that actually got put into production – like the old Isuzu VehiCross. Remember that one?

Its underpinnings are based on the seven passenger MDX crossover SUV and it’s roughly the same length overall but it only has two rows of seats and seats just four (barely). It comes standard with the MDX’s Super Handling All-Wheel-Drive (SH-AWD) as well as 19 inch rims and about 8 inches of ground clearance , but it’s really more about style and curb appeal than functionality or practicality. It’s about having something different for a change – even if it’s not especially useful.

Prices run from $45,495 for the base SH-AWD equipped model without the Technology package to $49,995 with the Technology package ($56,045 with the even more “techie” Advance package, which includes gadgets to appeal to the Batman in you such as electronically adjustable shocks, collision-avoidance braking system, a blind spot warning system, active cruise control, voice-command audio with 15 Gig music storage hard drive and more stuff like that).

The ZDX was all-new for the 2010 model year, so the ’11 is largely a carryover, with a few minor changes to trim and options.

A Corolla can carry more people; back seats are is Batcave-like and can be awkward to get into and out of.

Heavy; could use more power to live up to Batman image.

The ZDX comes standard with a 3.7 liter, 300 hp V-6 and six-speed automatic with normal and sport shift modes, as well as available manual control of gear changes via steering wheel-mounted pushbuttons. This is about the same, power-wise, as the BMX X6 with 3.0 liter turbocharged in-line six (300 hp) and the Infiniti FX35 with 3.5 liter V-6 (303 hp).

However, both the X6 and the FX can be ordered with considerably more potent V-8 engines, while the ZDX doesn’t offer an optional engine.

Still, it manages to reach 60 mph in the mid-six-second range, which is redible performance, especially given a curb weight of more than 4,400 pounds.

Acura’s Super Handling All Wheel Drive (SH-AWD) is standard in the ZDX.
This AWD system is more sophisticated – and performance-minded – than most AWD systems in that it can modulate power delivery to individual wheels, rather than just front to back. It’s set up to make the front-wheel-drive-based ZDX feel more like a rear-wheel-drive car when driven aggressively, while still providing the traction advantages of a conventional front-to-rear AWD system.

ZDX Fuel economy is not terrible; 17 city and 23 highway. These figures are actually better than the six cylinder-equipped BMW X6 (15 city, 21 highway) which at 4,896 lbs. is even heavier than the ZDX – and about the same as the V-6 powered (and several hundred pounds lighter) Infiniti FX35’s 16 city, 23 highway.

The ZDX’s maximum tow rating is just 1,500 pounds. (This is odd because the MDX – upon which the ZDX is based and with which it shares an underlying chassis as well as the same engine – is rated at a much more manly 5,000 pounds.)

Given those tall tires, nearly eight inches of ground clearance and more than two tons of curb weight, the ZDX manages to feel reasonably sporty, both handling-wise and acceleration-wise. It’s by no means a corner burner or a tire-fryer (not even possible with the AWD system) but it feels peppy enough in a straight line, with enough guts to execute a respectable fast pass – and it will corner faster than most people dare to drive.

The optional adjustable shocks (included with the Advance package) let you dial in more firmness and the SH-AWD system does an impressive job of making this FWD-based vehicle behave very much like the RWD-based BMX X6 and Infiniti FX if you’re really pushing it hard.

Subjectively speaking, I think the ZDX would be a lot more interesting if it had a bit more juice than the MDX on which it’s based. Maybe even an available manual transmission. But it ought to have more gumption than the MDX – and it’d be nice if Acura offered an optional engine that could hang with the V-8s available in the X6 and FX.

Just looking at the ZDX – with its ski-slope roofline and sharply tapering squinty side glass – you’d expect visibility to be terrible. But it’s actually not. The rearview is pretty decent, actually – thanks in part to a flat section of glass built into the lower tailgate. You don’t notice this from outside, because of the dark tinting, which maintains the visual effect of a solid rear section – but it nonetheless greatly improves your sight-lines to the rear.

The side view is acceptable, too – notwithstanding the broad-shouldered rear quarters and side glass that’s rakishly tapered backward as well as canted inward.

The driver sits in front of an uber-modern dash layout finished in taut, hand-fitted leather stretched tightly over each major trim panel. Brushed nickel trim plates and plush velour finish it all off. A neat touch is the “monolith” center stack, which goes dark when not in use. Again, very Batmobile-like.

Critics have screeched bloody murder about the ZDX’s lack of space, but this is only partially true. Yes, the back seats are difficult. The doors cuts down into a very narrow “v” at the bottom, leaving not much room to swing legs in and out. But once you’re in, it’s actually not so bad. The seats are canted backward in a semi-reclined set-up, so even a six-footer like me has some daylight between the top of his head and the car’s headliner – as well as between his knees and the back of the front seat. The real issue here is age – and agility. For younger people with plenty of flexibility, getting into and out of the ZDX is not a big deal; but for older people who aren’t that flexible, accessing the ZDX’s back seats may be a serious problem.

Raise the liftgate and you’ll find about 56 cubes of cargo capacity – plus three very nicely finished hidden cubbies (one in the floor, underneath a cover supported by gas-charged struts; the other two on the side panels). It’s not as much room as in the MDX (83.5 cubic feet) but it’s very close to the X6 (60 cubic feet) and Infiniti FX (62 cubic feet). This is not small by any means, either. Keep in mind that a current full-size car such as a Mercedes-Benz S-Class sedan only has a a 16 cubic foot trunk. So while the ZDX may not have as much cargo space as a large crossover SUV like the MDX, it nonetheless has almost four times as much cargo capacity as an S-Class Benz!

Fit and finish are both unimpeachable – and impressive. The hand-stitched leather (comprised of multiple individual sections form-fitted to the underlying part, such as the side panels on the center console) is magnificent. The ZDX’s thickly carpeted, velour and brush nickel-trimmed cargo area is richer-looking than the main cabin in most other cars.

This is a swank ride; a show car come to life that you can drive home in.

A major ZDX safety gizmo is the optional Collision Management Braking System (CMBS), which uses proximity sensors built into the front of the vehicle to detect an impending crash, warn the driver – and if the driver fails to respond by braking, will begin to apply the brakes automatically.

Also available: a blind spot warning system that alerts the driver (via dash icon and audible warning) to the presence of another vehicle or object in the ZDX’s orbit, so that you’re away of its presence before you initiate a lane change/merge.

All ZDXs come standard with front seat side-impact air bags, curtain air bags, anti-whiplash headrests, traction/stability control and ABS – as well as the SH-AWD system, which is as much as safety feature as any of the foregoing.

Acura probably won’t sell many of these things, but it’s cool that they went ahead and produced it anyhow. 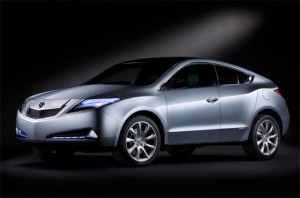