In the Department of Good News:

Virginia and several other states are in the process of legalizing higher speed limits. VA’s Governor, Bob McDonnell, signed a new law raising the max to 70 mph from the current 65 mph on certain sections of Virginia highways.

In the Department of Bad News: This brings us back to 1970, when the maximum legal speed on Virginia highways was also 70 mph.

After 40 years, we’re back to where we started from.

But a question comes to mind: If it was safe (assuming so, because it was legal, after all) to do 70 mph in 1970 – in a 1970 model car, probably with drum brakes, bias-belted tires and no electronic safety aids whatsoever – then surely it’s safer to go faster today, after 40 years of technical advances in vehicle design…  right?

The current average speed on most American highways is around 70 mph already. Making this the “limit” is ridiculous because a limit ought to mean the fastest reasonably safe speed – not the average flow of traffic.

Given 40 years of advances in vehicle design, a limit that’s 5-10 percent higher than the current average 70-ish flow of traffic – what the engineers call the 85th percentile speed – would surely be reasonable.

Is it crazy? Reckless?

Shouldn’t a speed limit mean the maximum safe speed under ideal conditions; in other words, a speed considerably higher than the average or 85th percentile speed?

Instead, we’re saddled with speed limits that are synonymous with the routine speed at which most cars happen to be traveling. This implies that a higher speed could still be within reason (and safe) for some drivers, in some cars, under certain (ideal) conditions.

A speed limit that correlates with the average flow of traffic, on the other hand, is only a limit in the sense that it’s a legalism – an excuse to mulct motorists who exceed it.

Which of course is exactly what we have.

To claim that driving even a single mph faster than 70 on a highway such as Virginia’s I-81 (especially in the rural parts of the state, where traffic is fairly light) is “unsafe” – period – is not just nonsense, it’s obvious nonsense – exactly the same as the old Drive 55 spiel was nonsense.

Everyone knew it was a farce. When you got pulled over and were issued a ticket for driving 62 (or whatever) you knew it was bullshit. You felt no moral guilt. Because it was obvious  that your speed was either unreasonable nor unsafe. Hell, it had been legal to do 70 just a few years before! Did the exact same highways suddenly become dangerous to drive on at a higher speed by dint of a lawmaker’s pen? Of course not.

Your only failure was not noticing the cop with the radar gun in time to slow down.

So this new (but really not) 70 mph “limit” in Virginia (and elsewhere)  is no different.

People already drive faster, routinely – precisely because it is routine to drive faster than 70 mph in a modern car, on an Interstate highway designed for safe average speeds of 70-75 mph. People forget this. The Interstate system was built specifically to accommodate average speeds of 70-75 mph – and this assumed 1950s-era cars/technology. Now factor in 50 years of car development – everything from modern high-speed radial tires to fully independent suspensions, four-wheel-disc brakes and all the electronic safety equipment, from ABS to stability control. Is it not ridiculous that we’re still talking about limits that aren’t even as high as the average speeds planned for by the engineers who designed these highways more than half a century ago? Is it any wonder that drivers routinely ignore the posted limit? Are that many drivers “unsafe”? Or is the average driver simply expressing his contempt for a stupid (and corrupt) system with his right foot?

Or it would be, if American motorists weren’t constantly harassed as a result – under the clearly ridiculous pretense that they’re guilty of dangerous “speeding” by driving faster than a limit that’s lower than the average speeds intended for these highways almost 60 years ago – and must be stopped, else all sorts of mayhem will ensue. Bodies will litter the shoulders burned out hulks will glow at night; the children!

What about the children!

A speed limit – properly defined – would be at least 5 and perhaps as much as 10 percent higher than the 85th percentile or average speed on any given road, factoring in weather, the condition of the road and so on.

Ballpark-wise, that would suggest a limit of around 80 mph on most Virginia highways – and probably nationwide.

You’d know it was a limit, too, because most cars would not be driving that fast. Perhaps 10-20 percent of all traffic.

Cruise-controlling at 70 mph with 80-plus percent of the other cars on the road would be just what we all know it to be: Going with the proverbial flow. To describe that as driving at the maximum safe speed should qualify the speaker for a semester of remedial English. Or, let’s at least change the terminology. If we can’t have legitimate speed limits, let’s call violations something honest such as “speed tax.” We’d still have to pony up, but at least we could dispense with the groaning, eye-rolling lectures about “safety” from cops, judges – and most of all, insurance companies.

That’s probably the worst part about the current system. As bad as the fines are, having to pretend we did something wrong – as when ginning up absurd apologias for  the cop, or groveling before some judge in the hope of getting him to reduce the charge – that’s a form of degradation that it would be glorious to rid ourselves of.

Even if we still have to pay up. 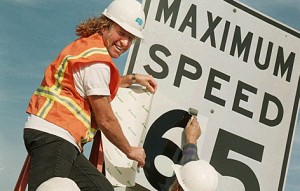