There’s an easy, uncomplicated – and entirely voluntary – way we could cut our gas consumption by a third our more, without federal fuel efficiency dictates or pocket-picking gas tax hikes.

All that’s needed is a reality check. By which I mean the 85-90 percent of us who don’t need and never use the power/capability of 300 horsepower, 140 mph and 0-60 in 6 seconds vehicles revert – on our own initiative – to driving vehicles more in tune with that everyday reality.

As an enthusiast driver, I’m all for high-powered, high-performance machinery and would never support a ban or punitive measures or threatening regulations directed against them. That said, there are a whole lot of people out there – probably upwards of 80 percent of the driving public – who are driving such machines at not much more than the posted speed limit (no more than 75 mph in every state except Texas) and who rarely, if ever, use even 75 percent of their vehicle’s built-in capability.

Does the typical driver motoring along at 65 mph need a 300 horsepower sport sedan that can easily hit 140? Wouldn’t such a driver be just as well-served by a 200 horsepower V-6? That power level, incidentally, was above the rated output of virtually every V-8 engine built for most of the last half of the 1970s and well into the 1980s.

We managed to get by.

How about the suburban mom shuttling kids to soccer practice in her superized, 5,000 pounder 4×4 SUV – skid plates and Hill Descent Control, brush bars and all?

It’s nice to have I guess – if you can afford it. But many of us are buying into advertising hype and buying far more capability than we’ll ever need or use.

The typical ’10 model year family sedan with a V-6 engine is in the same ballpark, 0-60 wise, as most ’60s and ’70s-era V-8 muscle cars – and has a much higher top speed capability, thanks to better aerodynamics and overdrive gearing.

We’re in the midst of a horsepower race, all right – but unlike the ’60s and ’70s, no one’s going anywhere fast.

American consumers have bought into the image of cars, even though few of us want to (or are even willing to) use them as advertised.

Ask yourself: When was the last time you were able to drive faster than 100 mph? Have you ever even driven 100 mph, for that matter? If not, what is the point of owning a car capable of doing 130 or 140 mph? Even if you are so inclined, when will the opportunity arise? It is virtually impossible to drive faster than 80 mph or so for any length of time in and around most of America’s major urban/suburban areas – where most of the country’s population is. And even if you could do it, it is usually illegal. In most states, driving significantly faster than 80 mph can put you at risk of jail – not just a big ticket.

Same with all these absurdly over-capable $50,000 SUVs one sees filling up shopping mall parking spots and suburban driveways all over the land. If you genuinely need a two-speed transfer case and the ability to slog through deep mud and unplowed drifts of snow, there is nothing finer than a real-deal 4×4. But if you don’t – then … why?

An all-wheel-drive wagon of “crossover” (even a good front-wheel-drive car with decent all-season tires) would probably suit you just as well 99 percent of the time – and return much better mileage, too.

Need to tow a boat to your slip? Unless you’re doing that more than a couple of times each year, why not rent or borrow a big rig to handle that job when you need to – and the remaining 360-something days of the year, drive something more in line with how you actually live?

And what about people who don’t even pretend to be enthusiast drivers? That’s got to be at least half of all new car buyers. Just ordinary folks who don’t even think about driving faster than the posted limit. They don’t jam the pedal to the floor and hold it there, or do burnouts or race other cars stoplight to stoplight.

How many Camry/Accord/Malibu drivers have a real need for serious speed? So what do they need a close-to-300 horsepower engine for?

It’s one thing to burn up a tank of $3 per gallon unleaded premium tearing down some fine back country road or hauling down a freeway at 80-plus, radar detector on ful alert. It’s another thing entirely to suck it down idling in stop-and-go suburban traffic or cruise-controlling it to the office at 45 mph.

Bottom line: If we don’t take the initiative, it’s going to be taken for us.

It’s in our own best interests to stop wasting fuel just for the sake of wasting it. 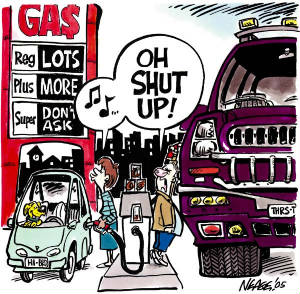