Once population gets to a certain density, it’s game over – for liberty. I mean, for real-deal, live and let live, do-what-you-want (provided you’re not physically harming anyone else) liberty.

You know – what most of the founding fathers (Alexander Hamilton and his proto-Reoublicans excepted) had in mind.

You live in a very rural area, let’s say. Very few other cars are on the road. So, when you roll up behind some old geezer doing 33 in a 55, it’s easy to just pass the old dude – and no hard feelings either way. He’s able to trundle along at his pace without cars (and angry drivers) stacking up behind him; you’re free to drive around the old coot and continue at your speed. 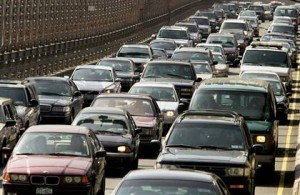 No tensions; no problems.

There are very few traffic lights – and when you come to a stop sign, you’re almost always the only car around and it’s just a minor, momentary interruption of your travel.

You can pull right onto the main road from sidestreets, usually – with just a quick glance either way to be sure no ones coming. If you need to park, you just pull into a spot.

And there is always an open spot.

In winter, you can usually get where you need to be because there’s no one else causing wrecks that block the road or interfering with your momentum.

Driving is a joy.

Contrast this scenario with the situation that’s become typical in and around every major population zone in the United States circa late 2010:

All it takes is one inept/fearful/reckless driver to gum up the entire works; everyone is stuck behind the old coot up ahead in his ’87 Buick doing 33 in a 55 – because there’s no way you can pass with all that oncoming traffic plus you’re 12 cars behind the coot anyhow.

Huge SmooVees with distracted hausefraus chattering away on their sail fawns blast through red lights, turn into your lane or don’t notice the light changed green until it’s on the verge of turning red again – just in time for you to get stuck in another cycle of waiting.

Worse, there are more per capita bad drivers to deal with – so they become inescapable, a constant hassle. You’re thwarted (or threatened) by them at almost every turn – literally. Get by/past one and there’s another one 20 yards ahead. The conga line of cars barely moves an inch. At every stop sign, there are scores of cars lined up awaiting their turn. Cars are backed up for blocks at traffic lights. Merge lanes are choked. You have to circle every parking lot like a shark, waiting for a spot to come open – and ready to fight for it.

It takes forever to get anywhere. No one smiles. Everyone’s tense.

Might as well give up and turn on the radio. 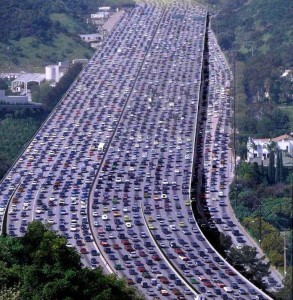 The unwritten rule of The Least Common Denominator comes into play. Every driver – the good along with the bad – is forced by the laws and the realities of the situation to drive (if it can be called that) at the level of the least-able, most fearful/unskilled people available.

Driving has become the equivalent of being a mouse in a Skinner Box.

The same dynamic operates in the political realm.

In a frontier-type, low-density environment, people are independent-minded and self-sufficient. To a great extent they self-police – and are happy. They earn their own keep and expect to be left alone in return.

Because people are not constantly rubbing up against one another, there is much less social friction. Resources abound; useful work is easy to get. People are largely free to do what they want, within reasonable bounds – and to enjoy their lives.

This is how America was – and it’s the reason for what America a great place to live – until about the late 1960s, at which point the population began to ballon at an almost unimaginable rate. 170 million suddenly – and 40 years is suddenly – became 300-plus million.

An almost doubling of the population it took more than 400 years to achieve in the space of my own short lifetime (I am 44).

Suffocating, omnipresent traffic – formerly an isolated curiosity you experienced on field trips to NYC or LA – was unknown to most Americans when I was a child in the 1970s. The suburbs were still pleasant, affordable and peaceful places to live and rear a family, yet still an easy drive into the city.

One could easily access solitude in the nearby woods, on a forest trail – or local park. People and cars and noise were not everywhere – yet.

Even air travel was nothing like the hateful, demeaning experience it has become today.

What has changed? What’s the common denominator?

Too damn many people.

Worse, most of these are not even American people. Deliberate policy changes (the Immigration Act of 1964, specifically) have unleashed upon this land a literal tsunami of humanity – most of it Third World humanity. Is it any surprise that America is increasingly coming to resemble a Third World country as a result? With the same horrid pathologies – from a seething (and growing in size) permanent underclass to the despoiling of formerly magnificent natural vistas to the relentless lowering of our political discourse to simple-minded catchphrases and childish images marketed to a peasant (and peon) mindset? 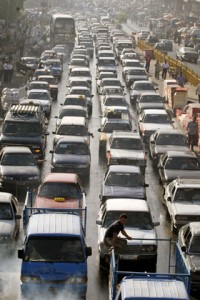 This is an obvious, even elementary consequence of adding tens of millions of Mexican peasants and Central-South American stoop laborers, Somalis, Pakis and Afghanis – the whole polyglot stew.

But we aren’t allowed to notice this – unless we “celebrate” it. Though why such ought to be celebrated is something that’s not easy to understand. By every measure save perhaps the profusion of electronic gadgets, Americans are miserable today whereas they were mostly pretty happy in the not-so-distant past.

We do not need more people.

We certainly do not need more people from the Third World.

And if we can just get a handle on this mess, maybe one day going for a Sunday drive will be enjoyable again.

“Lucid” is the Last Thing This Is