Let’s dial back the clock a quarter century and return to the early days of the Reagan Era – when Pontiac made a last-ditch effort to keep the Trans-Am from becoming a re-skinned Camaro powered by the same Chevy-built V-8 found under other the hood of its sister “F” car.

The Pontiac-built 400 that powered the TA during its Great Days in the mid-late ’70s (when hundreds of thousands were made each year) was gone – killed off by GM corporate over concerns about fuel economy and complying with federal emissions rules. The big V-8, which dated back to 1955, needed an update – but GM didn’t want to spend money on it – so no more were made after 1978 and the last ones (left over in inventory) were installed in a few lucky 1979 Trans-Ams (and even fewer Formulas).

Rolling into the 1980 model year, the Trans-Am was in real danger of being seen as a toothless, over-heavy Gimp.

Its only engine choices were a Chevy-built 305 or the flimsy little 4.9 liter 301 V-8, the last Pontiac-made V-8 still being manufactured. The downsized 301 had been conceived as an “economy” engine for lower-caste Pontiacs. It had only a two-barrel carburetor (originally) a very low compression ratio and a block and heads made of relatively fragile, lightweight materials – all intended to take weight off the front end of the cars into which it would be installed – and to reduce fuel consumption. 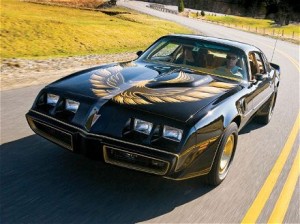 No thought was given to the 301 as a potential performance engine – at least when it was conceived.

But by 1980, Pontiac had no other V-8 of its own to work with, and if the Trans-Am was to remain respectable – and Pontiac powered – Pontiac would have to work with the 301.

Turbocharging, at that time, was becoming somewhat popular as a way to goose the output of a smaller engine “on demand” while keeping the fuel economy reasonable the rest of the time. Buick, in particular, had done a lot of work in this area and was having some success with its turbocharged 3.8 liter V-6 engine – a powerplant that would become famous (and feared) by the mid-late ’80s in cars like the Buick Regal Grand National and GNX.

Buick’s efforts probably inspired engineers within Pontiac to consider turbocharging the 301 V-8,  which circa 1979 was producing just 150 horsepower.

A specially reinforced block and other internal improvements laid the foundation. A unique cam was installed – and of course, turbo-specific exhaust plumbing, along with a low-restriction dual outlet exhaust system similar to the earlier “T/A 6.6” 400 V-8s.

Capping it off was an AIR Research turbo that fed compressed air to the engine through a specially calibrated Rochester Quadrajet four-barrel carb.

Maybe even better, given the torque advantage.

The turbocharged Trans Am suffered another handicap, too. It was not offered with a manual transmission – whereas the ’79 400 had only been sold with a 4-speed manual. The reason? Pontiac, despite its best efforts, could not “emissions certify” the 301 with a manual transmission. (In the days before engine management controls and especially, electronic fuel injection, getting a manual-equipped car through the certification process was very difficult.)

The best Pontiac could do was fit a “performance calibrated” three-speed Turbohydramatic automatic to the car.

Another problem with the 301 turbo was that it was carbureted. Carbs and turbos don’t work well together – chiefly because carbs can’t meter the fuel as precisely and also because the turbo must “blow through” the carburetor – and carbs are by design intended to operate under vacuum, not boost.

The final nail in the 301’s coffin was its not-ready-for-prime-time electronic controls.

Like early jet engines, the 301 turbo was still going through its teething phase when it was put into a production car. It actually did have a great deal of potential, but that was hard to see through the enfeebled performance (even when things were working right).

Had Pontiac been given time to massage the technology, the 301 turbo almost certainly would have matured into one of the most formidable performance engines of the ’80s. Doubters should look across the aisle to the miracles Buick eventually worked with the 3.8 liter turbocharged V-6. EFI, intercooling and digital controls turned this engine into the most powerful production engine GM made in the mid-late ’80s, when it was installed in Regal Grand Nationals and the 1989 20th anniversary Trans-Am. 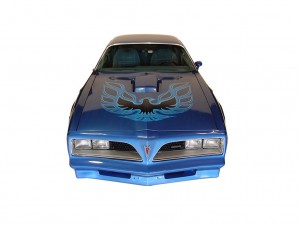 These were cars capable of low 13 second quarter mile times and 150 mph top speeds right off the showroom floor. Indeed, the ’89 20th Anniversary Trans-Am equipped with the turbo Buick V-6 engine was the first Trans-Am in 15 years to beat the performance stats of the V-8 powered ’73-’74 SD-455 Trans-Am.

Pontiac clearly hoped it would get the chance to develop the 301 to its full potential. And for a brief moment, it seemed as though that was going to happen.

When the redesigned third generation 1982 Trans-Am appeared, it had an offset “turbo bulge” hood scoop, just like the ’80-’81 Turbo Trans Am. The car’s front subframe was designed to accommodate the Pontiac V-8, too. In the smaller, much lighter third generation Trans Am, a 250-300 hp turbocharged 301 would have been a tremendous performer. Probably, it would have been quicker and faster than the Buick Regal Grand National given the same advances in EFI/intercooling but with two more cylinders and more displacement to bring to bear  – in a more aerodynamic and lighter package.

A five-speed equipped, mid-1980s Turbo Trans-Am would have been a memorable ride. And with a real Pontiac V-8 under its hood, it would have retained its Pontiac personality – as well as assured its future collectibility.

And very possibly, the survival of Pontiac.

Unfortunately, GM management decided to kill the development of the Pontiac V-8 altogether. The 301 would be the last-ever Pontiac V-8.

Beginning with the ’82 model year, all Firebirds from that day forward to the final year of production in 2002 would have the same engines as the Chevy Camaro. That meant from ’82-up, there was no meaningful difference under the hood between a Camaro Z28 and a Trans-Am.

It has become a “Pontiac” in name only.

Arguably, this is the thing that eventually killed off the Firebird line itself. And eventually, Pontiac too.

After all, why bother with the (so-called) Pontiac when the same car was being sold for less money at the Chevy store? It’s true there were exterior and interior differences, but these were superficial. The Pontiac’s still-beating heart had been ripped out of its engine bay – and the transplanted Chevy mill could never provide more than artificial life support.

Had Pontiac been given the chance to work out the 301’s bugs, not only might the Trans-Am have survived to the present day, but Pontiac itself might have also. By taking away its unique, Pontiac-built V-8, General Motors took away the fundamental quality that made a Pontiac different – and thus, desirable. It took away the reason for people to buy a Pontiac – since without a unique, Pontiac-built engine, the cars it was selling were just rebadged Chevys and Buicks.

And that was the end of Pontiac.