Pontiac is most famous for models like the GTO of the ’60s, the Firebird of the ’70s – and even the Fiero of the 1980s. These cars cemented Pontiac’s status as a performance car (and pop culture) icon.

But fish a little deeper – toss a lure behind that old stump in the shade – and something much larger may rise to the bait… .

The Catalina was, at first, Pontiac’s “entry level” large car and it came in the full spectrum of bodystyles – even a station wagon during the cars early years. Sedans and coupes were also built, but the model most treasured as a relic of Pontiac’s former glory is the convertible version – particularly those built from 1961 through the final call eleven years later, in ’72, when the last one was christened.

It  was full-sized, but it was also the least expensive and lightest of Pontiac’s big cars – which made it very popular among big car performance enthusiasts. As the Kennedy Era dawned, this tendency became an explicit engineering (and marketing) focus.

1961 marked the first year for the new style Pontiacs – featuring the now-legendary split grille that became one of Pontiac’s signature styling features right through to the end of the division in 2009. (Technically, the first appearance of the split grille theme occurred in ’59 – but Pontiac did not fully commit to the look until the ’61 model year, when it became an across-the-board motiff.)

Catalinas got the new split grille (along with handsome, recessed grille bars and a pair of “side by side” quad headlights) but one of the car’s main selling points was Pontiac’s “wide track” suspension layout, which pushed out the distance between each set of wheels, in order to enhance stability and roadholding. Under the hood, a 389 Trophy V-8 (with either single two or four barrel or Tri-Power triple two barrels) could be specified. For the racing circuit, Pontiac even built a handful of Catalinas without the usual warranty – but with a lightened frame and super-thin aluminum bumpers (resulting in about 200 pounds less curb weight) and powered by a radically cammed Super Duty 421 V-8 with twin 500 CFM Carter four-barrels and rated at an astounding 405 horsepower.

The true output of the SD-421 was rumored to be in the neighborhood of 460 hp. These cars were were capable of 12 second (and quicker) quarter mile times – the equivalent of a 300 pound linebacker who can run a 50 meter sprint in under 6 seconds.

In ’63, the Catalina got a freshened front end treatment with handsome, vertically stacked headlights and a more squared off profile. It continued the tradition of full-size performance as the muscle car era officially dawned that fall with the introduction of the intermediate sized, Tempest-based GTO. To distinguish the Catalina from the Goat and the new-rising crop of mid-sized performance cars, Pontiac up-sized the Catalina for 1965 – increasing its wheelbase to 121 inches (from 120 previously) and restyling the whole works.

The newly stretched ’65 Catalina managed the tough trick of being both immensely large yet strikingly sexy. Think Anna Nicole Smith in her best days, maybe photoshopped a little here and there. Coke-bottle styling similar to the profile used on the smaller GTO – but in the two liter size – laid the basic template. A proud beak capped the nose, to either side of which sat a pair of vertically stacked headlights with surrounds that canted forward, giving the car a hungry expression.

And it was a hungry thing, no doubt.

For under the hood of every Catalina – even the base model – lay 389 cubic inches of pure Pontiac power, the weakest version of which still produced 256 horsepower sucking through a Rochester two-barrel carburetor. Buyers in search of ramming speed could opt for the four-barrel, higher compression version of the same basic engine but with 325 hp. And if that was insufficient, three two-barrel carbs could be stacked on top (just like in the GTO), bumping things up to 338 hp.

Four-speed manual transmissions were available to back these potent Ponchos, too – as well as GM’s new Turbohydramatic 400 three-speed automatic transmission – a new design featuring a “turbine” torque converter that soon became the industry standard.

All this machinery was as essential to the forward progress of the Catalina as those two city block-long reciprocating engines were, deep inside the bowels of Titanic. For the Catalina was an almost immovable object – like its namesake, the 22-mile-long island off the California coast.

A Bonneville was slightly bigger – but not by much (a mere three inches, wheelbase-wise). The Catalina convertible had six inches on the GTO – and spotted it nearly 500 pounds. A V-8 (and a big V-8) was thus mandatory – and would remain so throughout the Catalina’s life cycle.

Indeed, Pontiac even offered the formidable 421 HO (a streetable version of this engine with a hydraulic camshaft but still offering up as much as 376 hp) as the Catalina’s top-of-the-line engine – the core of the “2+2” performance package that first appeared during 1964 and which formally transformed the big Pontiac into a kind of oversized GTO.

The 421 HO was not available in the smaller GTO – at least, not as a factory-installed option. If you wanted to play with the big boys, you needed to get yourself a big toy. In addition to the 421 V-8, the 2+2 package also got you a heavy-duty suspension, Hurst-shifted three-speed manual transmission (a four-speed manual was optional), performance axle ratio and dual exhaust.

Though all Pontiac V-8s are essentially similar (there are no “big” and “small” blocks), the 421 was a long-stroke version of the Pontiac V-8 that used a different crankshaft with longer connecting rods to achieve its greater displacement. It was built for high torque production, as well as high horsepower – the former being as crucial to the acceleration of a two-ton colossus like the Catalina as the latter was to the performance of the comparative lightweight Goat.

So long, that is, as you kept the thing pointed in a straight line.

While the GTO at least tried to handle, shuffling a 4,000 pound-plus Catalina 2+2 through slalom cones was like expecting Oprah to breakdance. Even if it could be done it would not be pretty. Still, impressive feats of drifting were possible – though it wasn’t called this back in the day. You just let the back half of the car “hang out” as the tortured bias-belteds shredded themselves for your amusement. Artful drivers could use the flanks of the car to sideslap whatever happened to be in range – like the tailfins of a giant angry Orca lurching around in its tank at Sea World.

Light silver-blue metallic would be the perfect color for such adventures.

Car and Driver magazine did a road test comparing a ’65 2+2 with a Ferrari GTO. The car did well – recording a top speed of more than 130 mph and a 0-60 time of just 3.9 seconds. But this performance was either heavily exaggerated or the car tested heavily leaned on. Reportedly, the Pontiac used in the comparison test was a specially tuned “ringer” supplied by Pontiac.

The 2+2 option did not last long, unfortunately.

It was discontinued after the ’67 model year as performance-minded buyers flocked to smaller, more manageable (and better handling) stuff like the GTO and, of course, the new Firebird – which made its debut that year.

Nonetheless, the 2+2’s three-year run was enough to establish the Catalina’s bona fides as one of the largest true high-performance vehicles ever to be mass produced. More than 40 years later, the survivors are held in high esteem by collectors – especially models with the optional eight-lug rims and manual transmissions. Finding a stick-shift in something this massive is a lot like discovering a $50 bill at the bottom of a box of Cracker Jack. It probably shouldn’t be there – but you’re sure glad it is.

In ’69, Pontiac completely restyled the Catalina – incorporating some of the same motiffs used on the same-year Firebird and Tempest/GTO – including an “ironing board” hood and prominent “beak” set in the middle of the trademark Pontiac split grille. The four headlights now sat side-by-ide instead of vertically stacked. It was not unattractive, but definitely less distinctive, than the ’65-’68s.

On the other hand, it was still a heavyweight mauler.

Wheelbase was up to 122 inches (now 10 full inches longer than the same-year GTO’s) and unladen curb weight rose to just 5 pounds under 4,000 lbs.

Only the Bonneville was beefier – at 4,130 lbs. for the convertible.

Another restyle for ’71 brought the B-body Catalina’s overall dimensions to their high water mark – 124 inches of wheelbase and an honest-to-Elvis two-tons-plus (4,081 lbs.). Major styling details included a new, Grand Prix-like front end treatment with a heavy-looking vertical grille set behind an equally massive-looking full-length bumper with “cow pusher” bars on either side of the grille.

Echoes of the ironing board hood remained but the stamping was more muted. Front buckets with center console and a wide bench in back provide room for five. It was still a very handsome car, top or down.

The new 400 V-8 (successor the 389) that first appeared in 1967 was the standard powerplant, rated at 265 horsepower with two-barrel carb. Two 455s (increased bore versions of the old 421/428) were also available, including the 325 hp 455 HO – more or less the same engine used in the Trans-Am that year but downrated by 10 hp. However, the object was not high-performance. These huge engines were there for the same reason the Budweiser wagon is pulled along by a team of six Clydesdales. Anything less than 400 cubes would have turned the Catalina into a castrato. The 455 made it all feasible – but by now manual transmissions (and any real performance hardware) were off the table.

With the demise of the 2+2 option after ’67, the Catalina and Bonneville had inadvertently become much closer competitors for the same basic slice of the market – essentially, buyers in search of a boozy, plus-sized cruiser. On this score, the Catalina was at something of a disadvantage since the Bonnie was slightly bigger (125 inch wheelbase in ’69) and thus offered more car (literally) for not much more money.

This closing of the gap may be responsible for the rather sudden death of the Catalina convertible after the ’72 run – while the Bonneville convertible lived on through ’76 before it, too, was cancelled.

The final year of Catalina convertible production saw a slight uptick in sales – about 2,399 were made vs. just 2,036 in ’71 – as buyers scrambled to get their hands on a piece of big-bodied bodaciousness that was shortly to disappear forever.

* Early Catalinas could be equipped with a portable, battery powered “Sportable Transistor” radio that could be taken out of the car.

* Pontiac’s Eight Lug wheels were an unusual design that incorporated the brake drum into the wheels for improved stopping performance. These were a popular option on Catalinas.

* During the mid-late 1960s, Catalina was America’s number three best-selling large car, just behind the Ford Galaxie 500 and Chevy Impala.

* A short-lived power ventilation system that appeared in ’71 was supposed to provide fresh air to the car’s occupants even when the car was stuck in traffic – but became the object of consumer complaints about cold air that could not be turned off. 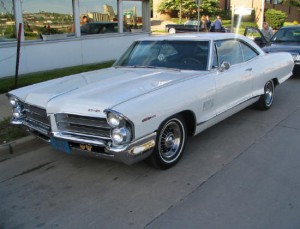