Name any category of vehicle – compact cars, sport sedans, luxury SUVs, crossovers – and there are multiple choices; sometimes as many as a dozen in any single category

But the Ford Transit Connect is literally in a class by itself – because no one else sells anything quite like it.

The Transit Connect is a kind of Mini-me jitney bus/compact-sized utility van.

Originally built for the European market – where space is tight and fuel expensive – the four cylinder-powered, front wheel drive Transit isn’t much bigger in terms of its exterior footprint than a current compact-sized sedan, but it has a comparatively huge (and tall) box with almost as much total cargo space (135 cubic feet) as a standard-sized minivan.

It is available in either cargo or passenger-carrying configurations, with prices starting at $21,200 for the Cargo Van XL (no side or rear glass and just two seats for passenger and driver) to $23,200 for the Wagon XLT Premium with a second row of seats and five-passenger capacity.

It’s a unique vehicle that doesn’t have any direct competition in the United States.

And it may be just the ticket for some people.

Transit was introduced (in the US) last year as an all-new (for the U.S. market) model.

To broaden its appeal to American buyers, Ford has added a passenger-oriented XLT Premium trim that makes Transits so equipped a viable alternative to a traditional minivan or medium-small crossover SUV.

XLT version could be a budget-priced alternative to a traditional minivan or crossover.

Windowless base models have Stevie Wonder rearward visibility that can make the Transit unsettling to drive in heavy traffic – if you’re not used to commercial-type vehicles.

One of the slowest new vehicles on the road; zero to 60 takes nearly 13 seconds.

The Transit comes standard with a 2.0 liter, 138 hp engine and four-speed automatic. This is basically the same engine that’s standard in the Transit’s cousin, the Focus sedan.

Gas mileage, though, is a positive.

Transit  gets 26 on the highway and 21 around town, or about what a typical compact-sized, four-cylinder 2WD pick-up delivers – and much better than the typical mid-high teens/low 20s of a V-6 powered van or crossover, let alone a V-8 powered van such as Ford’s full-sized Econoline.

It takes a few minutes to get used to your environment inside the Transit. The roofline is much taller than even the tallest of the new “cube” vehicles (Scion xB, Kia Soul, Nissan… er, Cube). It extends upward from the top of the windshield by eight inches. But this is what makes the five-foot floor to ceiling height – and the Transit’s versatility as a cargo-hauler – possible.

There’s a storage alcove built into the upper bulkhead, just like in jitney busses of the type you may have been ferried from a hotel parking lot to an airport terminal in. Behind you (in Cargo versions) is an untrimmed, unadorned all-metal interior; no side or rear windows.

There’s no rearview mirror because, after all, what would be the point?

Wagon versions do get glass – and you can order it as an option on the lower trim Cargo versions.

Though it is physically a small vehicle (180 inches long and 70.7 inches wide, or just only slighter longer and wider than a Focus sedan – which is considered a compact) the Transit’s height (nearly 80 inches, vs. 58.6 for the Focus) combined with the windowless sides and rear, makes it feel bigger than it really is.

Still, once you get used to it (and learn to use your side mirrors) you find the Transit is very easy to maneuver into tight spots, such as curbside parking in busy downtown areas. It readily slots into places that would be off limits to a standard van, or even a standard minivan. The turning radius is only 39 feet. Though it’s perhaps the most top-heavy looking vehicle since the Suzuki Samurai, it doesn’t feel unstable (if driven within reason), thanks to its fairly low center of gravity.

Acceleration is postal Jeep-like, but it’s enough to get around, provided you don’t mind not getting there first. Yeah, a 12-13 second 0-60 time is pretty crippled up by modern car standards, but reflect that it’s actually better than most average/v-6 powered family-type cars delivered back in the ’80s.

And the decent gas mileage is your payoff – though the Transit would be even better with a diesel mill under its hood. The diesel’s torque advantage at low speeds would make it feel snappier in terms of acceleration and probably it would get 40-plus MPGs, too.

The transit looks like a downscaled commercial vehicle, especially models painted washing machine white (like my test vehicle) without the side or rear glass. Your neighbors will think the electrician is doing some work at your place. Or maybe that you’ve opened a new catering business. And that actually might be an issue for some people who live in communities with HOAs that prohibit residents from parking “commercial” vehicles outside their homes – or even in their driveways. Though legally speaking it’s not “commercial,” you still may have to wrangle with the HOA Mussolinis.

The interior is simple and well-designed for its intended purpose. Dual (manual) sliding side doors are standard; you can also access the back by a pair of hinged doors that open outward and almost fold back on themselves (225 degrees) to keep them out of your way and make it easier to load the vehicle.

Two-seater versions have a total of 135 cubic feet of cargo capacity. This is a lot of room for the size. For perspective, the physically much larger on the outside Kia Sedona is 202 inches long and 78.8 inches wide vs. 180.7 inches long and 70.7 inches wide for the Transit, but the Kia has only slightly more total cargo volume – 142 cubic feet. And the Transit’s layout is set up for maximum usability. The 6×4 cargo floor is totally flat – and the depth from the ceiling to the floor is five feet, which means you can walk around back there, albeit hunched over some. Still, you can roll a motorcycle into this thing, no problem.

Try that in a standard-sized minivan.

There are also some unique features available in the Transit that you can’t get in any other vehicle, such as the factory-installed broadband Internet access/display with wireless keyboard and mouse that lets you check/send e-mails from the vehicle (which must be stationary for the system to work, fyi). There’s also an available DeWalt Tool Link RFID tracking system to inventory your expensive tools.

Passenger Wagon versions come with a second row of three-across seats, which are easy to access via either of the two sliding doors. The very low step-in height of the Transit makes getting in and out of the second row easy, even for people with limited mobility.

In fact, the Transit would probably be an ideal candidate for a handicapped conversion. There’s plenty of room for storing a wheelchair in the cargo area and getting in and out requires less stepping up/climbing over obstacles than in a conventional minivan.

If you’re contractor, you could add shelves along the interior sides of the cargo box; dealer installed bulkheads are available, too.

Even base models get AC and tilt/telescoping steering wheel included as part of the standard equipment package.

Ford did a lot to keep the Transit simple and (hopefully) low bucks to maintain as well as to buy. For example, it comes standard with stamped steel 15 inch wheels with plastic wheelcovers and disc/drum brakes. Accidentally run up over a curb (or hit a deep pothole) and you probably won’t hurt the rugged steel wheels. And if you lose a plastic wheelcover, it’s going to cost a lot less to buy a new one than the fancy trim rings on alloy wheels.

The drum rear brakes will get the job of basic transportation done – and like the steel wheels, they are simple, functional, durable and cheap when they require fixing. Drum brakes don’t have relatively fragile rotors to warp – or expensive calipers that can seize up, Just replace the shoes (typically, $40 or so) every 30,000 miles or thereabouts and you’re all set.

Some reviewers mock the Transit’s four-speed automatic as ancient technology – which it is, given that most new cars come with at least five-speed transmissions and many offer six or even seven speed transmissions. But while the four-speed may not be the most modern – and while it’s true the Transit’s probably a bit less fuel efficient (and not quite as quick-feeling) as it might have been with a five or six-speed – the four-speed keeps the up-front cost of the vehicle down and (probably) this unit will cost you a lot less to rebuild/replace, should that become necessary, than the newer transmissions – which can run $2,500 or more just for a replacement unit – not counting install labor.

For small businessmen, or the Family Guy looking to pare down the cost of owning/operating a vehicle – all this is very appealing.

Plus, no one’s going to bother this thing. You can park on the street without worrying about it.

It’s nice to see oddball vehicles like this coming back to the market. The Transit’s certainly not for everyone. But there are people out there who will appreciate the Transit for what it is – and what it can do for them. 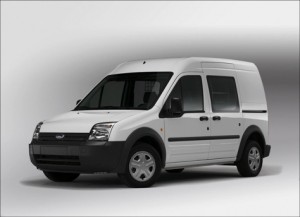