Naming cars, like naming kids, sometimes comes out all wrong. Striving to be cr8tive, some parents cripple their progeny with appellations guaranteed to result in a lifetime of abuse.

It’s the same with cars – and the effect can be just as crippling. Check it out:

In a single stroke, Ford managed to alienate half the potential buyers of this otherwise not-bad 1990s-era two-plus-two sports coupe. The unfortunate connotations bothered many women in the same way that hearing that banjo theme from “Deliverance” tends to put most men on edge. Not one of Ford’s better ideas.

It’s not really a car; it’s just pretending! This was one of those econo-boxes that was not merely humiliating to drive, it embarrassed its owner everytime its name was uttered in pubic. “I drive a Charade.” Might as well shout, “I regularly attend Star Trek conventions dressed as a Klingon!” (See also: Ford Aspire.)

The name’s not even spelled correctly. It’s Aztec, you asshats!  And it didn’t help matters that the vehicle itself resembled a dumpster – though that’s where the idea for this abomination belonged in the first place.

Someday, it hopes to be a car…  Sort of like Robin looks up to the big guy in tights and a speedo.

This name sounds like the noise you’d hear issuing from the gullet of an exotic water bird choking on a herring. Or maybe it’s a small animal? (My Yaris had an accident on the carpet this morning… .)

It doesn’t separate light waves, just you from your cash. And your dignity. At least this thinly disguised, rebadged Toyota Corolla sold by Chevrolet was an ok car under its goofy nameplate.

Do you really want to own a car named after endless annoying small problems that are difficult to fix? Courtesy of the same folks who brought you the Pacer.

AKA, the “mistake.” (A Mercury executive made just that slip-up at one of the press introductions for this car.) The third or fourth attempt by Ford to build a “world car” that not even the U.S. was much interested in. 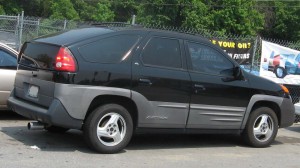 Girlie Cars of the Recent Past