The sudden demise of the Catalina convertible in 1972 left Pontiac with just one capital ship convertible in its inventory – the mighty (but short-lived) GrandVille.

It was basically a two-door version of the GrandVille sedan, which was now Pontiac’s top-of-the-line full-size car, taking over for Bonneville. It had the same wheelbase (126 inches) and overall dimensions as the also full-size Bonneville – but higher status.

Also, the Bonneville was (after 1970) no longer offered in convertible form.

The two-door layout made the GrandVille appear even more massive than a Bonneville sedan because the back two-thirds of the car seemed to go on just about forever. Stand by the driver’s side door handle and you were only amidships. If you were a gentleman and wanted to walk around the rear to open the passenger’s side door for your companion, she might be waiting awhile.

It helped to bring a snack. 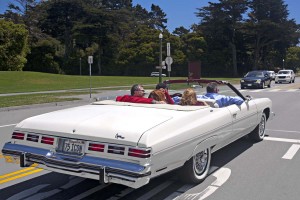 Still, the GrandVille carried its weight well. Only the federally mandated 5 MPH bumpers that afflicted the industry across the board in the early-mid ’70s marred the car’s otherwise proportions. They seemed tacked on, an afterthought – which of course, they were. The federales simply dictated that all new cars be so equipped and rather than restyle entire front and rear clips (which could not be done overnight) Pontiac, like everyone else, drilled a few holes and bolted these equivalents of automotive orthodontia onto the poor GrandVille (and every other model, too).

Thus, the earlier models (1971-’72) are the most cosmetically appealing – their baleen whale-like screen of a grille unobstructed by the chromed 2×4 grafted onto the ’73 and later versions. A bumper was there, but it was more like a chrome-plated chin that sat underneath the grillework.

455 power was absolutely standard in the 4,266 lb. GrandVille – because it was absolutely necessary. In 1971, the year before GM dumped high compression engines and the long slide into the emissions emasculated mid-’70s began, Chief Many Horses ponied up 325 of them – virtually the same output of the same-year Trans-Am in 455 HO form but in a more stately package. Argent or body-colored 15×7 Rally wheels and rear fender skirts (from ’73-up) completed the ensemble.

In ’72, the lower bumper began its inexorable rise upward, now splitting the already split grille horizontally as well as vertically. The GV’s standard 455 suffered a myocardial infarct at this time, too – leaving it crippled down to 185 hp. Even though the way horsepower ratings were published had been changed from way-optimistic SAE “gross” to a more honest SAE “net” (engine installed in the car, with accessories and with a factory stock tune) this was a calamitous decline.

Fortunately, the GV’s honor could still be preserved by ordering the optional 220 hp version of the gradually fading away 455.

’73s got the ugly bumpers (with cow pusher bars on both ends) and less angry-looking grille treatment. The headlight buckets now drooped down into the grille, making the big Pontiac seem sad. 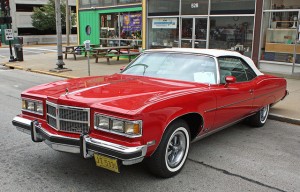 On the upside, the standard 455 was kick-started a bit, up to 215 hp – and you could order a 250 hp version with dual exhaust and Quadrajet four-barrel. GTO-like three-bar tail lights still looked sharp from the rear, too. These would be altered to full-length, “blocked” style for ’74 – a look that wasn’t nearly as clean or attractive as previously but which made Uncle Sam happy because the brake lights were more visible now. Pontiac tried to revisit the grille shape of the ’71-’72s, but the presence of that girder-like, rub-strip coated battering ram of a bumper could not be disappeared by cosmetic trickery.

This (’74) would also be the last year before catastrophic converters put a choke hold on the 455. Up to 255 hp was still there for the taking, along with a beefy THM400 three-speed automatic and even dual exhausts.

’75 brought the dreaded cats, single exhaust only and no more than 200 hp, SAE net. And that was with the optional engine. The base 455 was back to a droopy 185. A new front clip with four rectangular headlights also appeared – and “Brougham” was added to the nomenclature. But only briefly. Pontiac dropped the GandVille – part and parcel of GM’s across-the-board cancellation of convertibles. About 4,519 of them were made during the Final Call.

Beginning with the ’76 model year, Bonneville once again became Pontiac’s top-of-the-line (and largest) model. However, it was smaller than the last of the GrandVilles (riding on a trimmed-down 124-inch wheelbase) and forget about a ragtop version.

These would not make a comeback for nearly decade (until the mid-1980).

The ’75 B-body GrandVille was truly the last of the Mohicans. It now dwells with the Great Spirit – along with Pontiac itself.

* Though most GrandVilles were heavily optioned with luxury equipment, it was possible to order one without AC, power windows – or even a passenger side door mirror.

* All GrandVilles had four headlights – the better to see you with, my pretty!

* GrandVille was one of Pontiac’s shortest-lived models, lasting just five years in production before being cancelled. Total convertible production over the period 1971-1975 was 15,968 – with the lowest production year being the first year, 1971, when about 1,789 were built. 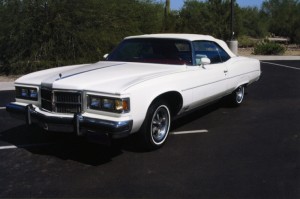