Ricardo Montalban achieved cultural immortality not for being the genetically enhanced, jump-suited superman Khan on “Star Trek” – or the suave, white-suited Mr. Roark on “Fantasy Island” – but for explaining that his “needs” were completely met by the rich, Corinthian leather-swaddled Chrysler Cordoba.

As for the Cordoba – it may have saved Chrysler, or at least, delayed the collapse (and government bail-out) that occurred in the early ’80s.

Of America’s Big Three, Chrysler was hardest hit by the three body blows of the ’70s – the surge in energy costs caused by OPEC, rabid competition from the Japanese (who got an artificial leg up in the U.S. market thanks to the sudden imposition of fuel efficiency mandates that effectively outlawed the full-size cars that were Chrysler’s forte) and the kidney punches of a torpid consumer market ruined by inflation and high interest rates.

As would happen again some 30 years later, people throttled back on buying cars – and especially, Chrysler’s cars.

The 1975 Cordoba was thus a kind of Hail Mary pass – Chrysler’s first “small” car, even though by 21st century standards, its 215.3 inch length, 115-inch wheelbase and 3,975 lb. curb weight would easily qualify it as full-size and then some.

A ’75 Cordaba was almost two feet longer than a 2010 Toyota Camry Solara, had eight inches more wheelbase and weighed 900 pounds more. Calling it “small” was the marketing equivalent of calling waterboarding an “enhanced” interrogation technique.

The Cordoba was a classy, even stately-looking car that suggested repose rather than rush – from its 15-inch whitewalls to its upright, Rolls-Royce-ish grille with C-H-R-Y-S-L-E-R stamped boldly in relief along the top. A pair of large round headlights with chrome trim surrounds pointed the way forward. Dashing “Cordoba” script flanked each front fender. A lighted vertical bar adjacent to the Frenched rear quarter windows and optional padded vinyl roof completed the effect.

In the ’70s, “personal luxury” meant spreadin’ out room. And, it meant a mallomar ride. People in those days didn’t expect a luxury barge to corner. They demanded that it float along like a coil-sprung Barcalounger – and at this, the Cordoba excelled, courtesy of its torsion bar front end and semi-ellipitical leafs out back that damped the beefy Chrysler’s weight as it dipped into potholes and rolled over bumps. Though it had the typically light power steering of the middle ’70s, anti-sway bars at both ends gave the driver good control through the twisties – and this became one of the car’s great draws.

Another was – as Ricardo reminded us – an interior that was just as plush as the ride. “Cashmere-like knit cloth and vinyl” upholstery across comfy bench-style seats was standard. This could be replaced with a velour-stitched 60/40 semi-bench or, for the True Experience, the famous “rich, Corinthian leather.” Bucket seats were as outre in those days in a luxury car as whitewalls on a Porsche are today. People who wanted sports cars bought sports cars. People who wanted luxury bought big boozy cruisermobiles like the Cordoba.

Not that the Cordoba couldn’t run when it needed to – at least for the first few years of its life.

Not only was a V-8 standard equipment, it was a big V-8. The ’75 came equipped with a 400 CID engine with four-barrel carb and single or (optionally) dual exhaust.

The 400 was descended from the old 383 – one of the most highly regarded of Chrysler’s large V-8s. It was fundamentally the same engine, with a slight overbore and tuned more for torque than all-out horsepower, befitting the times. Even so, the four-barrel version cranked out 235 hp – a strong number for 1975. (The same-year Chevy Corvette was down to a 180 hp 350 V-8.) The standard transmission was a Torqueflite three-speed automatic with an unusual for the era lock-up converter to boost fuel economy at highway speeds.

Buyers looking to get the most economy out of their Cordoba could select a small-block 318 two-barrel V-8 (150 hp) as a credit option. A mid-level 360 four-barrel (180 hp) was also available.

A 400, four-barrel equipped Cordoba delivered easy highway power – as per the TV commercial – and was capable of reaching 60 mph from rest in a leisurely 12 seconds or so.

Despite the desperate times, Cordoba exceeded sales expectations by a considerable margin. First year production ran to 150,105 units – jumping to 183,146 by ’77.

T-Tops became available – along with standard “Autopheritic” rust-proofing for the chassis.

’78 was also the year the front end was restyled – with vertical stacked square headlights replacing the previous single rounded units. Many Cordoba afficionados prefer the cleaner and more distinctive look of the first-generation cars – and whether it was the controversial new look or the fact that a second energy crunch was hammering big cars, sales began to droop – down almost 60,000 compared with the previous year.

This downturn was the banshee’s wail – heralding not just the beginning of the end for Cordoba but also the imminent collapse of Chrysler itself.

By ’79 – final year for the “big” Cordoba – sales had dropped to 88,015 units. A desperate downsizing and restyling was attempted for 1980 – and though the new car was at least still rear drive and did offer V-8 power, the Cordoba was not long for this world.

The tragic thing is it actually might have worked – except for the fact that Chrysler’s quality control had become scandalously sloppy by this time as part of frantic cost-cutting and buyers justifiably become leery of the Pentastar. Total Cordoba production for 1980 was barely 60,000 – and by 1981, even that would look good when Cordoba flat-lined to just under 19,000 sold.

1983 would be the last year not just for Cordoba – but for rear-drive and V-8 powered Chrysler coupes for the next 20-plus years.

* The Cordoba was named after the Spanish city but its emblem is based on the design of an Argentinian coin.

* In ’79 Chrysler dabbled with the idea of a performance-minded Cordoba. This one-year-only version was dubbed “300” – a reference to the late 1950s and early ’60s “letter series” muscle coupes – and came with the same high-performance 360 four-barrel used in the ‘Lil Red Express pick-up (as well as police interceptor sedans).

* An LS version of the ’80-83 models featured a stylish “crosshair” grille set in a unique, “aero” front clip. 1980 models with the optional 360 V-8 (’80 was the final year for this engine as a Cordoba option) are considered especially collectible. 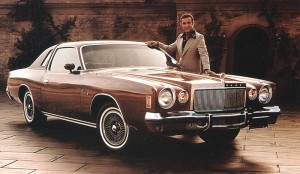