GMC is GM’s upscale SUV and truck division – up a notch from Chevy, not quite as high-end as Cadillac.

Until just a couple of years ago, GMC only sold trucks – and truck-based SUVs.

Of course, not everyone wants a truck – or even truck-based SUV. Realizing this, GM decided to broaden GMC’s product portfolio by adding the Acadia – a car-based crossover SUV – to its lineup.

Though it has the hunky looks of a large, truck-based SUV, the eight-passenger Acadia is the first-ever GMC model to be built on a front-wheel-drive, integral frame/body passenger car chassis (with an all-wheel-drive system available optionally).

It is slightly larger (and can carry more people) than the similar in layout Acura MDX, Lexus RX, Mazda CX-9 and other medium-large luxury crossover SUVs

It has two corporate twins – the Chevy Traverse (on the lower end) and the Buick Enclave (priced slightly higher and with more of a luxury-oriented layout and look).

The Acadia is marketed as more upscale than the Traverse – and sportier than the Enclave.

Carries more people than competitors such as Acura MDX and Lexus RX.

More upscale than the Mazda CX-9.

Extra-large size may be more than some buyers need.

GMC still hasn’t got the luxury-brand status of Acura or Lexus.

The ’11 Acadia comes with pretty much the same 3.6 liter V-6 that made its debut back in 2008, when this model was first brought out. It now produces between 281 and 288 hp (depending on whether you order an Acadia with single or dual-outlet exhaust) vs. 275 hp back in ’08.

It’s teamed up with a six-speed automatic, the only transmission offered.

Zero to 60 takes about 8-8.2 seconds, depending on whether you’re driving a FWD or AWD version.

Acadia’s maximum tow rating is a very stout 5,200 lbs. – close to the capability of a truck-based V-8 SUV and much higher than the typical 3,500 lb. max in this segment.

The Acadia is big!

The weight does two things, one good the other not so much.

On the good side, the Acadia feels as solid as a Rolls Royce Phantom on the highway cruising along at 80-ish. If a semi blasts past you doing 100, you won’t feel (or hear) much of anything. It would take a hurricane to push this thing off its chosen path.

On the not-so-good-side, the Acadia’s borderline slow with just one person in it and once loaded up with a family of five or so, it’s no longer borderline slow. It is slow. You’re in Prius territory now, only you’ll be drinking gas at 2-3 times the rate. Loaded up and driven with a semi-heavy foot, the Acadia uses as much gas a V-8 SUV, but doesn’t compensate for this with decent thrust when you push down on the gas pedal. More power is definitely needed. The lighter, smaller MDX has a significant under-the-hood advantage (300 hp) and though the Mazda CX-9 has less power on paper (273 hp) its lower curb weight gives it a more athletic feel – both accelerating and cornering.

The same basic 3.6 V-6 that’s in the Acadia produces 300-plus hp in other 2011 GM models (Cadillac CTS, Chevy Camaro) and it really ought to be tweaked up to produce the same – or even better, more – power in the much heavier Acadia – which needs the extra juice even more.

Unlike a truck-based SUV, the Acadia’s interior isn’t crimped up by a huge driveshaft tunnel rising up like a mountain range between the seats, eating up much of the available real estate. You’ll also notice there’s no truck-style solid rear axle; no two-speed transfer case or 4WD Low range – and so, not much in the way of off-road ability.

But that’s ok – because the Acadia’s not meant to tackle rutted backwoods fire roads or ford mighty rivers. There are Land Rovers (and Yukons) for that. And of course, the price for that kind of capability is usually a huge on the outside vehicle that doesn’t offer all that much usable space on the inside – mainly because of the way a truck-based SUV is laid out, including that space-hogging driveshaft tunnel.

So, instead of off-road capability many people don’t really need, the Acadia offers superior room inside as well as everyday usability to buyers – especially those with large families – caught between the Oprah-like handling and civility-compromised nature of a traditional truck-based large SUV – and the horrible prospect of driving a minivan.

The Acadia comes with a standard third row and room for 7-8 people, depending on the configuration. That’s as much or more interior space/people-carrying capacity as a full-size SUV like GMC’s own Yukon – but it’s much more accessible space, thanks to wide-opening rear doors and GMC’s clever “Smart Slide” system that lets passengers get into and out of the third row without major gymnastics. That third row’s a real third row, too – not a press kit shuck-and-jive that’s really there for looks (and advertising purposes) only. The Acadia seats 7-8 people comfortably and is every bit the equal, road trip-wise, of a full-size minivan like the Toyota Sienna or Chrysler Town & Country – but without the diaper-duty stigmata.

Buyers can choose second-row captain’s chairs or a second-row bench (and three across seating). There’s almost 20 cubic feet of additional storage space behind the third row, too. With the second and third rows out/folded down, the Acadia is fully capable of carting home a load of 2x4s – even a dozen bags of cement mix.

Its 117 cubic feet of cargo space is absolutely massive.

If you cross-shop specs, you’ll discover the Acadia’s actually not too far off the pace of what a mid-sized, truck-based V-8 powered SUV can haul. But no mid-sized SUV can carry eight people. In fact, few full-size SUVs can outdo the Acadia when it comes to people – or cargo – carrying.

For example, the enormous (on the outside) Yukon isn’t significantly bigger on the inside than the Acadia. It can theoretically seat up to nine people, but unlike the Acadia, its third row is difficult to access, uncomfortable to use (for adults) and doesn’t fold flat. In the real world, the Yukon’s comfortable for 5-6 adults – and maybe a kid or two. No more. Pile your Brady Bunch in both vehicles and see for yourself. It’s a dead heat, usable space-wise. And you’ll likely agree the second and third row accommodations in the Acadia are more pleasant once you’re seated – and much less hassle to get into and out of, too.

Acadia wins easily on total interior cargo volume, too. The Yukon maxes out at 108.9 cubic feet.

And as far as gas mileage goes, there’s a similar gap – in Acadia’s favor.

While the Acadia’s numbers don’t seem all that much better than a big SUV’s, keep in mind its super-sized interior and super-sized cargo capacity. To get appreciably more of either, you’d need a super-sized SUV – something even larger than the standard-issue GMC Yukon, like a Caddy Escalade ESV or maybe a long-wheelbase Lincoln Navigator. And then you’d also get the super-sized (single digit) fuel bills that would come with it. That’s acceptable if you must have a truck-based 4WD system – and the off-road capability and big towing numbers that come with a truck-based chassis and heavy-duty underpinnings. But if all you really want is the roominess of a large SUV and don’t really care about lugging around a 9,000-lb. trailer or climbing backwoods trails, why accept the downsides?

FYI: Looks are one thing, but test-drive a Denali with those 20 inchers back to back against an SL or SLE with the more real-world ready 18 or 19 inch wheels before you come to a decision. There is a noticeable loss in the plushness of the Acadia’s ride quality with the oversized wheels. GMC should make it possible to “delete option” the stupid 20 inch wheels for those who don’t want to muck up this vehicle’s superb driving feel/ride quality for the sake of emulating the aesthetics of thug rap star vehicles.

Other than needing a bit more power to match its curb weight (and luxury-brand aspirations) the Acadia’s a really nice roller and a great big-family alternative to a traditional V-8 powered full-size SUV. 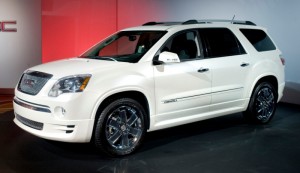