The article I wrote a few weeks back about the value of buying (and using) a radar detector (http://ericpetersautos.com/forums/sh…ad.php?t=15792) prompted several replies pointing out that in Virginia and DC –  where detectors are still illegal – I ran the risk of being nailed by a “radar detector detector,” specifically, the Spectre III/Elite used (apparently) by many police. (See here: http://www.stalkerradar.com/spectreIV/redirect.html)

I looked into it a bit – and also have my own real world experience using the Valentine 1 (highly recommend this model; see here: http://www.valentine1.com/
)  for about three years now in Virginia and thought I’d post what I know – or what seems likely – based on that.

First, I am pretty confident that the Virginia State Police and most local police in Virginia do not have the Spectre III or similar radar detection equipment. Either that, or the Valentine 1 is not detectable by them.

I have gotten away with using the V1 every single day for almost three years, on highways and secondary roads all over the state. Every time I drive – literally – the V1 has alerted me to a cop running radar, either coming at me from the opposite direction (moving car) or from a stationary unit parked off to the side of the road. Each time, I have slowed down – and sailed right past the cop without incident.

The cops don’t even look at me.

I don’t turn the V1 off, either. I usually just snatch it off the dash, where I “stealth mount” it using quick-release Velcro (which makes the unit much less visible since there’s no dangling power cord)  before I get close enough to the cop for him to easily see the V1 sitting on my dashboard. However it is still on – so if the cops have a Spectre or other type of detector detector that is capable of picking out the V1, I would assume that by now at least one of them would have come after me to check for a radar detector.

But that has not happened.

It’s possible I’ve just been very lucky, but I doubt it. I drive a lot (probably 20,000 miles a year) in multiple different vehicles, all over the state.

* Given that most people are cattle and will obey the law – no matter how unfair, stupid or even evil the law happens to be – the cops in VA assume that most people do not have radar detectors and so are not actively looking for them. Probably most departments – especially local ones, with more limited budgets – quite rationally conclude that there’s no real justification for spending $2,500 or more per unit to buy detector detectors, since most people are cattle and will not buy/use a radar detector if its illegal to do so.

(The side benefit here for people who aren’t cattle and use radar detectors anyway – despite the laaaaaaw – is that we have the element of surprise on our side. Since cops assume most people don’t have detectors, they don’t use tactics that assume most (or even many) drivers do have them. They just “paint” traffic with K or Ka, without much if any attempt to hide what they’re doing. This gives the handful of us with radar detectors a real advantage – in Virginia and DC, anyhow.)

* While police may be looking for them visually, they do not have effective radar detector detectors. I’ve read that the newer, top-of-the-line radar detectors such as my Valentine 1 and the Bell STi either can’t be picked out by detector detectors or their ID range is not enough for the cop to get the drop on you.   If you read the technical specs. published by the manufacturer of the Spectre radar detector detector, you’ll see the effective range is somewhere around 1,000 feet out (from the cop to you). But the V1 (and, apparently, the Bell STi) is effective at much greater distances than that, so even if the cops have the Spectre, odds are you will detect them before they detect you. This jibes with my personal, real-world experience using the V1 in Virginia.

It appears pretty safe to run with a radar detector in Virginia (can’t speak to the situation in DC) provided you use a high-end unit (forget about the cheap units; they’re a waste of money) and you’re careful to keep your unit low-profile by using the Velcro-on-the-dash mounting system, as mentioned earlier – which camouflages the unit and makes it virtually invisible to any lurking cop unless he’s literally right next to you. Always snatch the unit off the dash (and out of sight) when near cops or in urban areas/slow-moving traffic where your “piece” would be more visible. Most important of all –  maintain high situational awareness. Be aware of your surroundings. Learn to recognize the signs of a cop. Become familiar with the types of cars they usually drive; where they typically run radar traps – and so on. Pay attention to the behavior of traffic around you. Etc.

To further stack the odds in your favor in places like VA and DC where radar detectors are illegal, do the following: When the unit goes off (especially Ka band, which is a guaranteed cop), slow to the speed limit, pull the detector off the dash and disconnect the power plug. Once the unit is off, it cannot be detected – so you’re absolutely sure of flying under the radar. 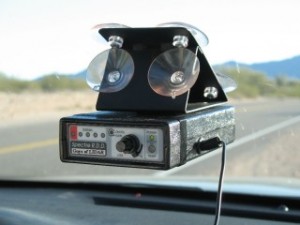