No longer do I have to live with the constant dread that just after the next blind curve sits a doughnut-eater running his Machine – because now I have a machine, too.

My ever-vigilant Little Friend chirps a warning – Slow Down! – and it’s that second or two of advance warning that has kept my record “clean” for 24 months now – a feat I had not managed in the previous 12.

Some may take umbrage and call me a law-breaker, which is technically true. But then, so are the cops and the system they support.

Speed limits, for instance, are very often not set according to the law. Instead of doing a traffic survey (including measuring the speed of traffic on a given stretch and determining the average, from which the posted limit is supposed to derive its statutory basis) the limit is just posted – at whim.

Typically, it’s set well below the 85th percentile speed (basically, the normal pace of everyday traffic) which has the effect of making virtually every driver on the road technically guilty of “speeding.”

A proper speed limit, according to the book (literally – the Manual on Uniform Traffic Control Devices, or MUTCD; see http://mutcd.fhwa.dot.gov/) speed limits should be set about 5-10 mph higher than the 85th percentile, so that only drivers going significantly faster than the normal flow are in violation. Most state and local governments are supposed to abide by MUTCD and the 85th percentile rule – but they don’t.

Another example: I live near the Blue Ridge Parkway, which snakes through rural Virginia and North Carolina. Last year, they repaved much of the section that runs through our area. They also just painted over several former divided-yellow line passing zones with a continuous ribbon of double yellow. Pre-pave (and paint) it was perfectly legal to pass a heaving RV struggling up the mountain at 24 mph (the posted limit is 45). Now, in exactly the same place, it’s illegal – at least, technically – because the lines have been repainted. But was a traffic survey done? Was the law actually changed? I doubt it very much. I think – I would bet – that the construction people just painted double yellow on their own say-so.

But you’ll still get a ticket if a cop happens to be coming along when you’re trying to pass that heaving RV.

Unless, that is, you have your Little Friend with you.

Mine has saved me no less than three times from getting a ticket in this scenario.

There’s also the issue of speedometer error. Many people have no idea but it’s fact that vehicle speedometers in ordinary passenger cars are often not accurate. They can be off as much as 5 mph, either way. This is why cop cars have “calibrated” speedometers that are tested to ensure accuracy.

But your car’s speedo may be off – and that means you could be “speeding” and not even know it.

You’ll get a ticket just the same.

A radar detector can also be a day-saver when, for example, you’re about to try to pass a dawdler doing just slightly under the posted maximum. To execute the pass safely, you will need to accelerate to well over the posted maximum briefly, in order to safely get around the dawdler and back into your lane quickly. This is obviously smarter – and safer – than trying to pass a car doing 52 without you yourself driving faster than 55. Cops know it’s so, too. But they will ticket you mercilessly if they catch you doing 65 to get around the dawdler – even if it’s only for a moment.

The final argument I’ll make – and it’s addressed to the “good driver” who rarely drives more than a few mph over the posted max – is in the form of a warning. It used to be that most cops in most places would “spot” you 5, even 10 mph – because they knew (but would never admit openly) that most speed limits were bogus and they felt bad about hassling people whom they knew were not driving dangerously. But enforcement is becoming much more aggressive as a result of declining tax revenues and increased costs for state and local governments. Traffic tickets are a vast potential source of revenue and all around the country, local governments are leaning on the police department to increase the haul as much as they possibly can. The cushion that used to exist is gone. You can expect to get a ticket – and not a warning – for doing 62 in a 55 or 50 in a 45.

Unless you have an electronic ally.

Now, a high-quality radar detector like my Valentine 1 (see http://www.valentine1.com/) is not inexpensive. But in my case, the unit paid for itself within the first six months. Do the math yourself. A single typical “minor” speeding ticket averages about $150, fine plus court costs. That’s less than the cost of the V1, of course. But don’t neglect to take into account the near-certainty that your insurance premium will be “adjusted” upward even after just one speeding ticket is credited to your DMV rap sheet. Get a second ticket within a 2-3 year timeframe and the near-certainty becomes an absolute guarantee. So if the detector saves you from getting even just two minor tickets over a two-year timeframe, you are in the black.

Everything after that is gravy.

And it’s impossible to calculate the value of escaping the clutches of Johnny Law. Avoiding just one ticket, courtesy of your Little Friend, will absolutely make your day. 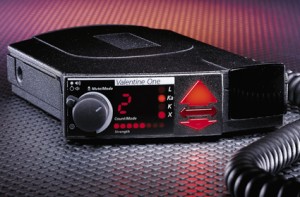