Beats me. This car is the obvious pick of the litter in its segment.

The other guys ought to be embarrassed.

An AWD-equipped G37x starts at $36,050. (A coupe/convertible version of the G37 is also available; it will be reviewed separately.)

The main mechanical change is the availability of a full-time AWD system, as well a new dash/gauge layout and some subtle changes to the front end and exterior trim.

Road-race handling when you want it; luxo-car ride quality the rest of the time.

Ok, the back seats are a little tight.

That’s all I could come up with.

The G comes standard with a powerhouse 3.7 liter V-6 that produces 328 hp – more power (in several cases, by 20 or 30 hp) than anything in the G’s class/price range. That goes for several competitor’s optional engines, too.

A seven-speed transmission is standard equipment; it is set up to shift very aggressively when the car is driven aggressively. It will hold a lower gear during high-speed cornering – and downshifts are “rev-matched,” which means that the computer blips the throttle between gear changes to maintain engine RPM during the transition, exactly like a manual transmission operated by a pro driver.

A six-speed manual transmission is also available, but only in 6MT versions, which are rear-wheel-drive only.

For some perspective, that’s a full second (or more) quicker than the CTS… with its optional 3.6 liter engine. The Lexus GS350 takes about 5.7 seconds and the BMW 535i does it in about 5.5 seconds.

The G is a smooth operator – and I don’t just mean the ride (which is that, too). This is a car for swift – but discreet – travel. It is one of the quickest (and fastest) AWD-equipped lux-sport sedans you can buy for less than $40k but it doesn’t have the cop-bait flash of a BMW (an established offender – in the eyes of many ossifers, at least) or the angular look-at-me insectoid profile of the CTS.

Get one in gun metal gray or some other dark color and you’ve got the highway hauling equivalent of a stealth fighter.

To avoid notice is the first step in avoiding the consequences of being noticed. And in a hustler like the G, that is key. Because it moves out – and you’ll want to make use of that ability, often – without needing an on-call lawyer.

The AWD-equipped model I tested felt lighter and more athletic as the rear-wheel-drive CTS – which isn’t surprising given that it is lighter by about 50 pounds, even with the extra weight of the AWD hardware (3,807 lbs. vs. 3,827 for the RWD Caddy) and has a huge horsepower advantage.

Not only can you power into corners, you can power out of them (and if you want to, power slide through them).

Other AWD-equipped lux-sport sedans like the Acura RL are well over 4,000 lbs. before anyone even climbs on board (the BMW 535i is over 4,200 lbs.) and likewise not packing anywhere near the power of the G’s class-dominating V-6.

Another item: There’s a big dip (probably a sinkhole in process) on a road I frequently use; if you hit this dip at anything close to the posted speed limit, it will bottom out the suspension, launch your head into the headliner (if you’re not buckled up) and make you believe you just broke something real expensive… in any car I have test driven over the past year except the G37. It absorbed this dip without bottoming out, bouncing or even getting flustered.

And I hit the dip doing more than the posted limit.

I don’t say this lightly or often, but the G37 has one of the best set-up suspensions in a luxury or sports car (coupe or sedan) you can find today.

This car doesn’t call attention to itself; it looks good – and high dollar – but doesn’t make a big deal of itself. It has fluid styling and nice proportions, so it’s the kind of car with staying power that won’t look like a period piece five years from now. And, as mentioned before, it is also the kind of car that a serious driver will appreciate, because it lets you get away with things that would be harder to get away with in something with a known rep or the visual cues that seem to draw the attention (and ire) of cops.

Standard equipment includes 17 inch wheels, keyless ignition, automatic climate control, all the power stuff and a steering wheel/main gauge pod that tilt as one unit (powered, on higher-trim Journeys). The AWD-equipped x version comes with dual heated seats and outside rearview mirrors. You can add everything from an uber-premium Bose audio rig with 9 GB music storage hard drive/touchscreeen GPS to a limited slip differential and 19-inch wheels with ultra-performance summer tires.

Trunk space – 14 cubic feet – is about par for the class.

Value probably isn’t the number-one consideration for people shopping lux-sport sedans, but there’s no reason not to be happy about the G’s modest (for a car like this) price tag, in view of all you get – and don’t get in other cars that cost more.

In several cases, a lot more.

Pretty much everyone likes this car; read what others have been writing about it. None of my friends in the business (fellow writers) had anything negative to say, either in print or in private.

And I’d say the main reason this car gets so much favorable press is that it doesn’t impose compromises. In so many others, when you buy AWD, you also buy a lot of deadweight – and that either dampens the car’s acceleration or forces you to buy the extra-cost optional engine to maintain what you had before you added the AWD.

Sometimes, sufficient power’s just not available – and even when it is, the bulk of the car still slops up the handling.

But in the AWD-equipped G, you get all-weather grip (and incredible handling on dry pavement) without a handling or acceleration penalty.

That the whole works still costs just over $36k (that’s the G37x with the optional AWD) seems almost too good to be true.

But there you have it.

No one else can match the G37’s moves, muscle – or price. 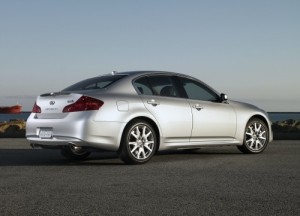 No Cadillac Diesels, Either