You never who you are dealing with during a traffic stop.

That goes for the person being pulled as much as it does for the cop doing the pulling-over.

Motorcyclist Michael McCloskey, Jr. found that out earlier this month when he was shot in the back by Ottowa Hills, Ohio police officer Thomas White after a not-so-routine traffic stop.

White claims McCloskey (and his riding buddy) committed several moving violations, which prompted him to turn on his flashing lights and attempt a traffic stop. The bikes pull over (video here http://www.liveleak.com/view?i=dd7_1274051429 ) and so far, all seems straightforward. McClosky can be seen rotating his torso while seated on his bike to face the cop, apparently trying (reasonably) to find out what he wants. McCloskey then reaches into his jacket – another normal, reasonable thing to do – probably for his wallet and paperwork. At this precise moment, White suddenly opens fire, striking McCloskey at least once – severing his spine. In the video you see the biker toppling to the pavement with White rushing over, weapon still aimed directly at him.

White was subsequently charged with felonious assault with a gun; he was found guilty May 19 and faces the possibility of up to 11 years in prison.

McCloskey is permanently paralyzed from the waist down. His sentence will last much longer than 11 years.

He is fortunate to not be six feet under.

The thing we should all consider here is how quickly a traffic stop can go wrong. And how important it is to do the right things to make sure it doesn’t.

From watching the video, McCloskey’s big mistake was to assume that in America, one isn’t at risk of being shot to death on the street over a speeding ticket. Such a thing doesn’t even enter the mind of the average person as a possibility. So, why not reach into one’s pocket (or glovebox) for the paperwork? That’s what the cop wants, right?

Not in today’s America.

What the cops want is immediate passivity and obedience. Many cops are ex-military and view the civilian motorists of America about like they viewed the hapless peasants of Iraq and Afghanistan – that is, with contempt. Not as fellow citizens deserving of civility and respect until they do something to prove they deserve otherwise.

Some cops are outright sadists, itching to use their Tasers (or their Glocks) to put down any resistance to their authority. Video evidence of this is shockingly abundant.

McCloskey’s almost-fatal error was not appreciating this reality. Instead, he did what Americans (especially Americans who are over 35 and who can still remember the old America) used to do routinely. He turned around to argue with the cop and he reached inside his jacket to get his wallet.

And it cost him a 9 mm lesson.

White testified he believed McCloskey was reaching for a weapon, not his wallet. He testified that it was “unusual” that McCloskey turned around when he shouted a command at him.

So he opened fire.

But McCloskey did not have a gun, or a weapon of any kind – and from watching the video, there appears to be no reason to suspect he had a gun. After all, he stopped for the cop. He didn’t attempt to flee. There were no warrants out on him. Other than perhaps “talking back” to the cop – which used to be ok in the America That Once Was – McCloskey didn’t do a single thing that could be construed as threatening.

Certainly not anything that merited a lead enema by the side of the road.

Unless “turning around” is now a sufficient provocation to bring about death-by-cop.

Ex-Officer White may ultimately go to prison, but McCloskey will bear the scars of this encounter – psychological as well as physical – for the rest of his life. He might very well be dead. Murdered would not be too strong a word. All because he failed to immediately go limp at the first bark of a trigger-happy cop.

Keep this in mind if you ride. Or drive.

It is no longer safe to exchange words with a cop. It is a possibly lethal mistake to do anything other than submit, instantly – and obey every and any command hurled at you. Put your hands on the wheel. If you ride, freeze. Don’t reach into you leathers for your ID. Don’t turn around.

This is the New America. 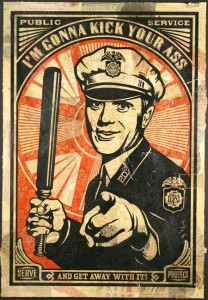 What Heroes Really Want to Do