As we watch the slow-motion train wreck that is the dying U.S. automotive industry, it’s easy to blame the economic situation for the debacle. And it’s certainly a contributing factor. Or more precisely, an accelerating factor.

It has made matters worse – and faster.

But there has been little discussion of the overcapacity issue that underlies the problem – and which is far more serious and which has been quietly bleeding the industry white for years now.

Too many vehicles chasing not enough market.

And it’s even harder to sell them at any kind of decent profit.

For years, long before the recent economic situation, the margins on most cars have been slim – and getting slimmer. Often as little as a few hundred bucks, net, per car.

Think how lousy a business that is. A car is a hugely complex thing comprised of thousands of individual components that must be manufactured at various locations and then assembled into a single unit. Literally thousands of people and several weeks (if not months) of assembly process are involved in the creation of a finished, ready-to-drive car.

Another problem: Modern cars have an extremely long shelf life compared with the cars of the past. With decent care, they can (and do) last 15-plus years and more than 200,000 miles. But the auto industry continues to churn out new cars on the 1960s-era assumption that most of the existing fleet gets recycled every 5-7 years or so.

And yet, each year, it seems another automaker jumps into the already overcrowded waters with yet another model to compete against the existing multitude – making it ever harder for everyone to earn a buck off the already-there stuff.

There was an exception to this – SUVs – during the period that ran roughly from the early 1990s through last year. Profit margins on SUVs were huge – as much as $10,000 or more per vehicle on a high-end model such as a Lincoln Navigator or Cadillac Escalade. Why? Because at first, there were only a few SUVs on the market – far fewer (both model-wise and total numbers-wise) than the emerging market for them.

So the automakers could charge more for them.

SUVs were also easier and cheaper to build than passenger cars – which helped uptick the profit per vehicle. But the real reason they were such money-makers – at first – was because supply lagged behind demand.

Now, of course, the market for SUVs is glutted, too.

Which gets us back to the overcapacity issue.

The U.S. population has roughly doubled since the mid-1960s, going from around 160 million to over 300 million today. That’s everyone – not just the people who are in the market for a new car – which of course is a much smaller number/percent of the total.

But the number of active “players” in the US car market – brands of cars and types of cars – has expanded by triple or more during that same period.

In 1970, GM controlled about 50 percent of the U.S. car market; Ford and Chrysler each had about 20-something percent. AMC was a bit player. VW, Toyota, Honda and Nissan (then Datsun) hardly registered. And they produced small cars only – not the full range of models from econo-boxes to SUVs and luxury cars they offer today.

Mercedes, BMWs, Audis and Volvos were exotic curiosities one rarely saw outside of places like New York City and Los Angeles.

And of course, there was no Acura, Lexus, Infiniti; the luxury car market in the United States was the virtually exclusive province of Cadillac and Lincoln.

Within each model segment – mid-size family sedans, for example – there were typically three or four major contenders circa 1970. Today, there are more than a dozen contenders in this same segment – and it’s similar in virtually every other segment. Meanwhile, the buyer pool has not increased in parallel with the increase in the number and types of vehicles being offered.

And of course, each vehicle sold these days tends to remain in service two or three times as long as the typical car of the ’60s or ’70s – which was beer can fodder by about 100,000 miles.

This combo – a surfeit of vehicles and a much slower turnover rate across the board, has created a much weaker, less solvent industry – precisely because the industry has given us cars that are so much better than they used to be in so many different varieties.

Competition and consumer choice are good things, of course. But there is such a thing as too much – and too many.

It’s like the toothpaste aisle at the store. Do we really need 20 or 30 different versions of Crest?

Billions of taxpayer dollars have already been thrown like so much confetti at the floundering automakers in order to assure that not a single car company goes under, economic viability be damned.

But this will only preserve a bad situation for a little while longer; the jobs supposedly saved will  inevitably still be lost in the long run. Because the market’s just not big enough to absorb 12 million new cars being added to the mix every year.

Eventually, reality will have its way – but from the looks of it, not before we bankrupt ourselves in a last-ditch effort to deny the obvious. 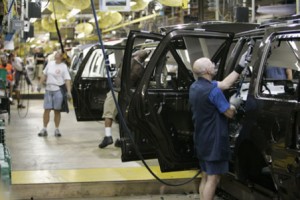