Sometimes, the best comes last – and not in the nick of time.

The Studebaker Avanti was one of these. Styled by automotive legend Raymond Loewy, the 1964 Avanti was a last-ditch effort to resuscitate Studebaker – which for many years had been struggling to stay afloat. The car was almost universally admired, but it just wasn’t enough to save the company.

It was too little, too late.

The same thing happened to Pontiac and Saturn. These two divisions of General Motors tried hard to stave off their execution – and just before the ax finally dropped, they each produced cars that could have made a difference, if only they’d come along a few years sooner.

Or been just a little bit better.

This car had the potential to be Pontiac’s latter-day GTO, or at least, the car the latter-day (and short-lived) 2004-2006 GTO shoulda coulda been. It didn’t look like a Cavalier with fat tires – that’s for one. And with four doors instead of two, the G8 had the versatility and potential market appeal a two-door like the GTO never offered . It could have been GM’s BMW M3. Instead, it lasted barely one year.

Where – and when – did Pontiac stumble?

Almost five years went by from the time the new GTO was launched (and cancelled) to the time the new G8 was finally ready for production . . . just in time for $4 per gallon gas followed by the near-collapse of the entire economy in 2008.

Followed, in short order, by the bankruptcy and government takeover of General Motors.

Pontiac, a division that had been under-performing for years, was put on the gurney for a quick execution.

It did not matter that the G8 was an excellent car; Pontiac – the brand – was all-but-ruined. One car, too late, could not save a division with zero curb appeal outside of trailer courts – whose main “buyers” over the past ten years had been airport rental fleets.

Few people are going to reach into a public toilet to grab a silver dollar.

Had the G8 appeared in ’04 or ’05 instead of ’09 (and instead of the GTO), back when gas was cheap and the economy still functional, Pontiac could have surfed a wave of newfound popularity back to The Light. The brand might have been rehabbed; other models could have partaken of the glory. Pontiac could conceivably have weathered the storm that was to come.

But it wasn’t to be.

The one upside is that G8s are going cheap. The death of Pontiac means the G8’s an orphan car that never built much of a following anyhow. Don’t worry about the mechanicals; the G8 shares its drivetrain parts with other GM models (Corvette and Camaro) and while Pontiac dealers are no more, you can still get parts and service at any GM store.

Finally, as both a desirable and a one-year-only model, the G8 may be the only recent vintage Pontiac whose value will go up as the years go by.

This car had the looks. Visually, the Sky roadster is a stunning machine. I attended the West Coast media launch of the Sky a few years back and the car got as much attention from people on the street as a naked supermodel. Something no Saturn model had received in years. People loved it. They waved us over to ask about the car. I’ve been doing new car evaluations for more than 15 years now and this was one of the warmest receptions I’ve ever seen a new model get.

Unfortunately, the goods were (in typical GM fashion) sub-par in too many places to be overlooked.

Just stupid, easily fixable mistakes – that were never fixed or not fixed in time.

The buttons for the power windows were mounted so far to the rear on the driver’s side door panel that it was almost impossible to operate them with your left hand. You had to reach around with your right hand to open and close the windows.

The gas gauge was the size of a dime – and buried what seemed like a foot deep in the darkened recesses of the gauge panel.

The cupholders were mounted on the center console, but like the power window switches, so far back they were literally unusable while the car was moving.

The car came with a five-speed manual. Most roadsters at the tim were already coming with – or at least offering – six-speeds.

The engine sounded awful. At high RPMs it grated like Captain Quint’s fingernails on the chalkboard.

Worst of all, the Sky leaked wind – and worse, rain – like a ragged out ’69 MGB. The roof seal was atrocious. I drove three different press cars and they all leaked. So it wasn’t just one bad car. It was built-in defect. At 60 mph, the wind noise was so severe it was difficult to have a conversation without yelling. Rain drops trickled onto your left arm and shoulder.

Still, I was pulling for the car because it was beautiful – and because it had so much potential. But Saturn – like so many of GM’s other divisions, so many times over the years – did nothing to correct the car’s flaws. Like the Fiero in the 1980s and the Allante in the 1990s, the initial enthusiasm soured fast once people spent some time with the car. As word got out, sales drooped – then went into unrecoverable freefall.

So the Sky – along with Saturn itself – took a ride on the white canoe.

It didn’t have to be.

And what makes it all the more tragic, given the Sky’s potential, is that it shouldn’t have gone this way. The car deserved better. A bit more finesse, a few readjustments here and there – and the Sky could have become a real threat to the BMW Z4, Honda S2000 and Mazda Miata.

Instead, it goes down in history as another GM misfire. 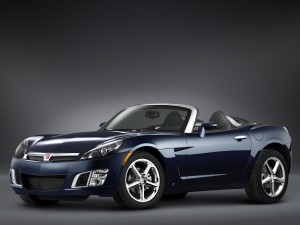