Two key things to know about the new Mercedes-Benz GLK:

First, its size. The GLK is slightly smaller than current mid-sized crossover SUVs  like the Lexus RX350 – and bigger than compact-sized models like the Acura RDX. 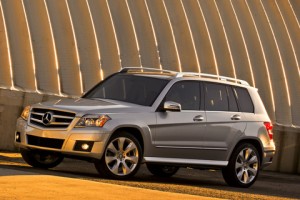 Second, the GLK – unlike just about all the competition in its segment – is built around a rear-wheel-drive layout (the C-Class sedan) instead of being front-wheel-drive based, like the RX350, Acura MDX and Audi Q5.

These design differences give the GLK some unique abilities – and also some potential liabilities.

It’s not for everyone, but it may be just right for you.

The GLK is a slightly smaller than medium-sized, five-passenger luxury crossover SUV. Prices begin at $35,500 for the standard rear-wheel-drive version and $37,500 for one equipped with Mercedes’ full-time 4-Matic all-wheel-drive system.

The GLK was introduced last year as an all-new model, so changes for 2011 are minor.

Bigger inside than the Acura RDX; more compact than the Lexus RX.

Rear-drive models not the ticket for snow days.

Can get really expensive really quickly if you add a couple of options.

The 0-60 times for all these machines is in the high six second/low seven second range – so pretty even.

The main functional difference between the Benz and models like the RX350 and Q5 and MDX is that those models are based on front-wheel-drive sedans while the GLK is based on a rear drive sedan. (The Audi Q5 and Acura MDX both come standard with full-time AWD, but these models are both based on a FWD design.)

What this means is that the GLK in standard RWD form is not as good in the snow (or wet) as the base FWD versions of the foregoing models. Adding the optional 4-Matic all-wheel-drive system evens things up, of course – but it also means you have to spend more to get equivalent bad-weather grip.

The base/FWD versions of competitor models are going to do much better in inclement weather. It’s arguably not even necessary to add AWD to these models as the FWD setup is fine for all but the worst conditions (heavy snow, etc.). The RWD GLK, meanwhile, will be as out of its depth on snow-slicked roads as most RWD sport sedans – with the slight advantage of higher ground clearance (7.9 inches).

On the other hand, the GLK’s layout is inherently better balanced for aggressive corner burning and with AWD it will handle even better on dry pavement than the FWD-based competition – with or without their optional AWD. (More on this below. )

Surprisingly, the smaller, lighter (and four-cylinder-only) Acura RDX is barely better than any of these when it comes to fuel efficiency: 19 city, 24 highway for the FWD version and 17 city, 22 highway for the AWD-equipped version. 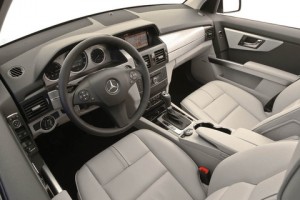 The larger (and most expensive of this group) Acura MDX is worst of all: 15 city, 20 highway.

If you’re a fast driver, you’ll quickly notice the GLK’s superior balance, steering response and high-speed handling. Here’s where the rear-drive layout shows a tangible advantage over the nine out of ten FWD-based crossover SUVs it competes against. The GLK reacts very much like a slightly bigger, taller C-Class sport sedan – which is exactly what it is. An RX350, meanwhile, feels a lot like a heavier ES350 –  which is more or less what it is. And the ES350 isn’t a car built for lazy cruising, not high-speed cornering.

Same with other FWD-based models like the Q5 and Acura RDX and MDX.

How come? Front-drive models have almost all the weight of the drivetrain (engine and transaxle) planted right on top of the front wheels, which makes the vehicle nose-heavy – and ass light.

Also, in FWD vehicles, the main drive wheels (the front wheels) do double-duty; they have to steer the vehicle at the same time they’re putting the power to the ground. This is is not ideal for high-performance acceleration and handling. Even when AWD is added to the mix, most of the weight of the drivetrain is still up front – and in most cases, most of the time, most of the engine’s power (90 percent is typical) still flows through the front wheels).

In the GLK, the weight of the drivetrain is spread out more evenly, front to rear – just like in a RWD sport sedan – giving much better inherent balance. And in RWD versions, steering and power delivery are handled by separate pairs of axles – which is inherently better for optimum handling and drive feel.

Even when equipped with the optional 4-Matic all-wheel-drive, the system is rear-biased rather than front-biased. During most driving, most of the engine’s power still goes through the rear wheels.

None of the FWD-based models the GLK competes with come close to matching its moves as a driver’s car. The Benz also has a state-of-the-art seven-speed automatic vs. the five-speed automatics that are still typical in the segment. Really, the only models out there that are comparable on this score are the also rear-whee-drive-based (and 303 hp) Infiniti FX and the rear-drive-based, AWD BMW X3. But the Infiniti starts at $42,400 ($43,850 for one with AWD) so it’s not really a fair comparison. The BMW is closer in price ($38,750 to start) but less powerful (260 hp) and it comes only in AWD form.

But, there’s is a catch.

If it snows – or the road is wet – the rear-drive GLK is out of its element, like Ned Beatty in the backwoods.

Electronic aids help limit wheelspin, but there’s no getting around the fact that as much as rear-wheel-drive is an advantage on dry roads for high-speed handling, it is a disadvantage in any kind of bad weather. The rear-drive GLK is no better in poor weather than any rear-drive sport sedan – its SUV looks notwithstanding. If you need all-weather capability, then you almost have to buy the optional 4-Matic AWD. That’s not a bad thing, but it does mean you’ll be spending at least $37k (vs. the rear-drive version’s base price of $35k) and that chips away at the Benz’s price advantage relative to models like the Lexus RX350 and the Audi Q5.

The GLK looks less minivan-like than many of the crossover SUVs it competes against, with blocky and angular styling elements similar to the larger GL-series.

It also looks a lot more substantial than its place in the Mercedes-Benz model lineup suggests. 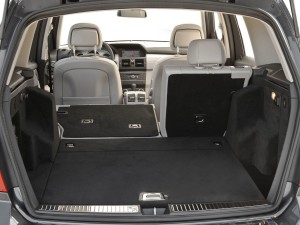 Technically, the GLK is the second-most affordable new Benz you can buy after a C-Class sedan. But nothing about it says “entry level” – or even mid-range. The paint, the panel fitment, the sturdy controls, the vault-like feel of the doors and the absence of anything low-rent looking anywhere – this is what people buy MBs for.

Park the GLK next to a $100k S-Class and it doesn’t look like an also-ran.

The GLK is, however, physically smaller (and has less cargo room) than the RX350, Q5 or the Acura MDX – all three of which are “full-size” mid-sized models while the GLK is more of a three-quarter-sized mid-sized model.

The Q5 is also minimalist on this score, barely edging out the GLK with just 57 cubic feet of total cargo space.

But this is neither a con nor a pro – as such. It all depends on how much space/room you need. The GLK may be “just right” where the others are too big.

The GLK appears to have been built to the same uncompromising standards as any other Mercedes – including models that cost two and three times as much. The paint is magnificent and flawless (even in the door jambs), the panel fitment as tight as a snare drum and the materials used (most notably the standard MB Tex vinyl, which is nicer-looking than the real leather in some other vehicles) for dash/door panels, trim and so on are all top-end in looks and feel.

The only downside is that what started out as a $35k vehicle can easily run close to $50k in no time at all.

Safety-wise, the main items not already included in the base price are a back-up camera (packaged with the optional GPS) and Mercedes’ TeleAid emergency system, which is similar to GM’s OnStar. If you have an accident, the system can automatically call police and EMS to the scene.

If you care more about performance handling than bad weather traction – and don’t need the extra space of a “full-sized” mid-sized crossover SUV – then the GLK could be the perfect choice.