GM’s Pontiac division was sent off on its own version of the Trail of Tears in 2009 – after years of broken treaties and forked tongue-talking with the corporation’s upper management. 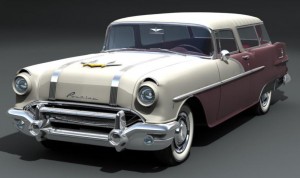 Part of the reason for the decline and fall of Pontiac can be traced to the loss of the division’s formerly unique, Pontiac-built powertrains – a process that began in the early ’80s when the last of the Pontiac-designed V-8s (the 301) was killed off and subsequent models with V-8 engines were fitted with “corporate” engines built (mostly) by Chevrolet. The second unkind cut was the forced homogenization of Pontiac’s model lineup, which became (for the most part) little more than tarted-up and rebadged Chevys and Buicks.

The Safari wagon wasn’t like that – while it was allowed to live, anyhow.

The first model appeared in 1955 as a csutom-bodied two-door wagonized version of the Star Chief, riding on a stately 124 inch wheelbase.

Though it shared some basic metalwork with the Chevy Nomad, the Safari had a unique two-door shell as well as numerous unique design flourishes – including a beautiful front end treatment with an ornate, multi-section bumper. The oval main section was set behind a pair of bumperettes on either side, with vertical sections forming a cross at each end. The amount of chrome used was impressive even then; unimaginable in our time – when the caustic chrome plating process has become as environmentally verboten as pouring used motor oil into a storm sewer.

Twin bands running the length of the hood, a forward-canted “B” pillar and traditional “chief” styling icons further differentiated the Safari from other GM models on the outside. On the inside, the Safari boasted sliding (rather than fixed or push-out) glass for the rear windows – while under the hood, Pontiac’s own 287 V-8 gave the big wagon a special war whoop. The 287 was making as much as 200 hp in 1955 – more power than the just-launched (and more famous) Chevy small-block that appeared that same year.

In 1957, the Safari was offered in both two and four-door forms – the Safari Transcontinental. It could seat nine and was loaded with extra trim and an upgraded interior, with a punched-out 347 V-8 under the hood. By this time, the Pontiac V-8 was producing as much as 290 hp (compared with the same year Chevy 283, which maxed out at 283 with fuel injection) making it one of the most potent “small” engines of its time.

Unfortunately, whether because of ineffective marketing or its higher price tag (more than $3,000 in ’57 when a Low Budget Special Chevy Beauville wagon sold for about $2,500 and a Nomad cost under $2,800) the Safari never caught on. During its first three years on the market fewer than 15,000 total found homes. This was considerably below the one-year sales performance of the Nomad wagon, which sold more than 20,000 copies in ’57.

In subsequent years, the Safari would be be based on the full-size Bonneville sedan and offered in both six and nine passenger forms – though henceforth always with four doors. Though it lost some of its aesthetic individuality, throughout the ’60s and ’70s, the Safari continued to offer pure Pontiac power under the hood, including the legendary 389/421 – and eventually, 455 – V-8 engines. Safar became Grand Safari in ’71, rolling on a truly Herculean 127 inch wheelbase, which was even longer than the Bonneville’s. This biggest of all Safaris ran through the ’76 model year, before GM’s company-wide downsizing program chopped nearly a foot off the big wagon’s wheelbase. By ’82, the wheelbase had been reduced to a Camaro-sized 108.1 inches and curb weight reduced by nearly 700 pounds. Big wagons were on the way out – at Pontiac and elsewhere.

* Though never offered with a wood body, the Safari was available with simulated wood applique along its flanks.

* Safaris of the early ’70s shared the famous “clamshell” dual-opening rear gate used on other GM wagons of the period.

*Performance-oriented features such as 15×7 Rally wheels were common upgrades found on mid-70s Safaris. It has been rumored that a few of Pontiac’s HO 455 V-8s may have found their way into a handful of early ’70s Safaris.