Five years ago, the following statement would have been laughable:

The 2011 Enclave has – and does – everything a Lexus RX or Acura MDX has or does. It can even be compared favorably with the much higher-cost Audi Q7.

Honest injun. See for yourself.

The Enclave is a full-size, three row, 7-8 passenger luxury-crossover wagon.

It shares a platform with two GM siblings, the Chevy Traverse and GMC Acadia. As a Buick, the Enclave is equipped with more luxury amenities and has a softer, more luxurious look and feel to it than the more utilitarian Traverse and the sport-themed Acadia.

It comes in front-wheel-drive and all-wheel-drive versions, with a base price of $35,615 for a front-drive CX.

2011 is a carryover year, with only a few minor changes made. That includes the sticker price, which rises only slightly – by about $100 across the line.

Can really seat eight people vs. seven – maybe – in a Q7 or MDX.

Or five in an RX.

Rides as quietly as a ’70s-era deuce-and-a-quarter (that’s Electra 225, for those too young to remember).

Far more elegant than non-lux large crossovers such as the Mazda CX-9. Let alone a minivan.

Tunnel vision rear visibility due to vehicle’s length, tops of seats interfering with your view and relatively small rear glass.

Buick hasn’t got the high-end glow of of Audi, Lexus or Acura – yet.

All Enclaves are powered by GM’s excellent 3.6 liter V-6, rated at 288 hp. A six-speed automatic is the standard (and only available) transmission.

Though the Enclave is a heavyweight at close to 4,900 lbs., it still gets to 60 mph in about 8 seconds flat with all-wheel-drive; front-wheel-drive versions are slightly quicker, being slightly lighter (by about 100 pounds).

Its performance puts it mid-pack.

A Lexus RX is quicker; an Acura MDX about the same. The base model Audi Q7 is actually slower.

The Enclave’s extra 1,000 pounds of pulling capability (relative to the RX350) gives it more capability than a typical car, which may be just enough for many buyers.

The Lexus RX also comes in at 17 city, 24 highway – and it’s a smaller vehicle that can only carry five people vs. eight for the Enclave.

You can get a slightly more efficient diesel engine (17 city, 25 highway) in the Q7, but the base price for that puppy is $50,900 – six grand more than a loaded with everything AWD Enclave CXL2.

The Enclave is a bus, but it’s a very nice bus.

The size is mostly in the background until you have to back out of a typically tight modern shopping center parking space, at which point careful proceeding is the order of the day. You may need to pull forward and back and adjust your angle a time or two more than you might in something shorter/smaller – but the tradeoff for that moment of easier close-quarters maneuverability is you’ve got a smaller vehicle with less people and cargo-carrying ability the other 99 percent of the time.

The Enclave’s weight, similarly, is not obvious until you try driving the thing like a sports car. As a Buick, the suspension is set for soft, cushy cruising – not aggressive, high-speed cornering. As a heavy Buick that’s also really long (close to 17 feet, grille to tailgate) it’s just not set up to play Corvette. A Lexus RX can hustle through the curves more adroitly. It ought to. The RX is much lighter (about 4,200 lbs., a difference of close to 700 pounds) and nearly a foot shorter overall (187.8 inches vs. 201.8 for the Buick).

If you test drive all three of them, you will notice that the Enclave’s ride is softer, with more give when you begin to lean on it hard – while the MDX and Q7 ride firmer and feel a bit sportier, meaning if you drive them considerably faster than the posted speed limit (especially in curves) they’re more in their element than the Buick under similar conditions.

But keep in mind that if you don’t often drive a lot faster than the posted limit – especially in curves – the Buick’s gentler ride and more easygoing nature may be the more desirable quality to have.

On the highway, it’s one of the nicest things going.

Buick stylists did a solid job camouflaging the true size of the Enclave by stretching the wheelbase out (118.9 inches) and leaving very little overhang beyond the centerline of the front and rear axles. It is still big, but it’s not visually intimidating.

Step-in height is reasonable, too – even with 8.4 inches of ground clearance – which is more than the RX (7.3 inches) Q7 (8.1 inches) and MDX (8.2 inches). A strip of chromed portholes flanking either side of the hood, Buick’s waterfall grille and enormous chrome wheels (even the base car comes with 19 inchers) give it a Churchillian gravitas.

Second row passengers get their own snarky center console (in seven passenger configuration) which has two large storage cubbies and a lid that folds both up and back as well as forward, creating a small table or work space for a laptop.

In eight-passenger configuration, the second row is a three-across 60-40 split-folding bench.

There are 110V and 12V power points, aircraft-style reading lamps and an available two-piece SkyScape sunroof, too.

The third row takes a little climbing over stuff to access but once you’re there, you’ll find you’ve got adequate head and legroom room. Unlike some other crossovers’ third rows – which force you to sit in the crash position, with your knees up against your chest – you get to sit in a more anatomically normal posture in the Enclave’s third row.

The Enclave’s chief virtue, of course, is its tremendous people/cargo-carrying ability.

Maybe it won’t tow as much as the He-Man Q7 (which is available with both a turbodiesel and a muscular V8) and ok, an MDX will out-corner it on a test track. A Lexus RX is a bit easier to park – and takes up less space in the garage.

But the Enclave beats them all as a luxury liner – with its three usable rows of seats and 115 cubic feet of total cargo capacity (vs. 84 cubes in the MDX, 80 in the RX and 73 cubes in the Q7).

Buick has come a long way, baby – that’s for sure. The fact that models like the Enclave can be seriously compared with models like the immensely popular and best-selling Lexus RX350 – and much pricier and established luxury  models like the Q7 and MDX – speaks for itself.

Objectively, the only area where Buick still has some significant catch-up to do is in the area of depreciation and long-term resale values. Public perception drives this as much as the actual merit of the vehicle in question and it’s going to take a couple of years, probably, for Buick’s cachet to reach parity with Lexus, Acura, Audi and the others. It doesn’t mean the others are objectively better vehicles; just that the public still sees them as such.

In the meanwhile, you should take into account that the Enclave you buy today might be worth less three from now than an RX350 or MDX. But maybe not. And even if the Enclave does depreciate faster, you can expect to pay a great deal less for it for up front – relative to the MDX and Q7, a lot less – and that takes away much of the sting from the lower (for now) depreciation rates enjoyed by the established luxury brands.

The Enclave’s powertrain warranty is good for twice the mileage and a year longer.

Both the Q7 and the MDX (and the Lexus RX) are very nice vehicles, each with their own virtues – but they’re also mucho more expensive than the just-as-nice Enclave – and they can’t take as many people along for the ride.

If you need some extra spreading out room – and don’t mind driving an up-and-comer instead of paying full freight to own an established player – you ought to check out this Buick. 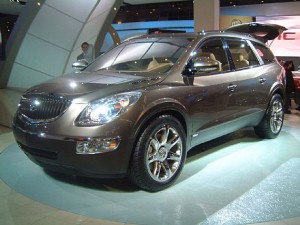