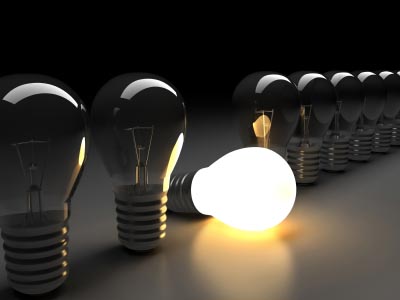 The “light” goes on for different reasons – and at different times. 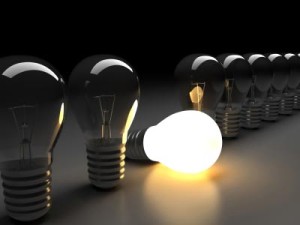 I entered young adulthood a “small government” conservative, probably because it appeared to jibe with my instinctive dislike of being told what to do (and not do) by various authority figures.

I even did volunteer work while a college student for the second presidential campaign of the ur god of conservatism, Rrrrrrrrronald Rrrrrrreagan. But there were aspects of this patchwork utilitarian outlook that nagged at me, even as a college kid.

One of the obvious problems with “small government” conservatism is its heavy dosing of busybody-ish moral unction – the “family values” schtick, for example. (Whose family? What values?). Another is its contradictory espousal of “freedom” on the one hand (in economics – sort of – but not consistently) alongside its insistence that people conduct their personal lives a certain way . . . or (here we go again) else.

In other words, aggressive violence. Just like any other brand of statist. Different label, same high fructose-sweetened soda.

I examined the “conservative” viewpoint at closer range – and quickly discovered it to be fundamentally the same as the “liberal” viewpoint. 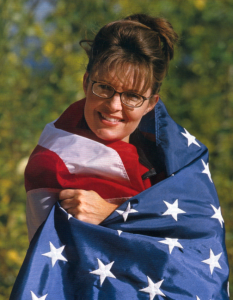 Worse, in a very important way. Because of principles.

Left-liberalism is at least open and principled about its core belief in the supremacy of the Great Collective, its absolute right to use force against the individual for the sake of the Great Collective – as defined by secular “priests” – the politicians and bureaucrats – who divine this ineffable thing called the “public good.”

Conservatism does not fundamentally disagree. It just wants a bit less force used – and for different ends – though the limits are never defined, which means the application of force against the individual is  essentially limitless in principle. With conservatives, you get to the total state  – and the negation of the individual – via a different route,  and perhaps a little more slowly.

And so, throw “small government” conservatism in the woods.

But, back to the light coming on. 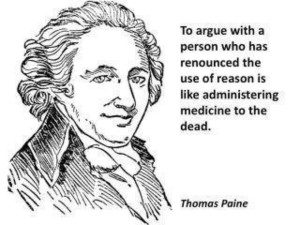 Franklin, Jefferson – and most of all, Tom Paine. Read their stuff. They come across as pretty “chill.” You can almost hear it: Live – and let live  . . .echoing down through the ages. Their lust not to control others, but rather to respect their self-ownership and leave them be. Jefferson cohered this into the elegant phrase we’re all familiar with but which many no longer comprehend: “The pursuit of happiness.” What a fundamentally benevolent sentiment! Paine even more than Jefferson held an optimistically high opinion of his fellow men and their innate capacity to reason. This, too, was a benign view of humanity’s basic nature.  Franklin, that salty old dog, was an Epicurean, a Libertine – and a self-made man who became famous for his inventions, his wit and his earthy good fellowship. He valued industry and thrift rather than coercion and debt. He advocated for the adoption of the pacific turkey as the national bird – rather than the avaricious eagle.

Statists of the era paid Franklin, Jefferson, Paine & Co. an unintended compliment when they called them freethinkers.

Jefferson and Paine were not, however, conscious Libertarians. They never got quite that far. But they were on that road – and pointed in the right direction. None of these men ever penned the words (or said, so far as can be determined) no aggressive violence. But it was clearly on the tip of their tongues – and pens. They came so close. Consider Jefferson’s personal anguish – as expressed both publicly as well as in his private correspondence – about the loathsomeness of slavery. Even if he didn’t act on it (though as a young man, he tried to) in his heart (and more importantly, his mind) he knew. 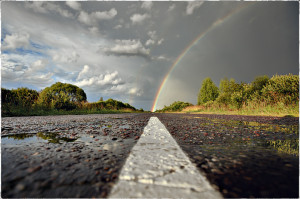 Despite this – and other – flaws, men like Jefferson and Paine and Franklin, too are arguably John the Baptist figures of humanity’s slow-turning but hopefully inevitable evolution away from aggressive violence in all its forms.

And I owe them a debt for helping me to start thinking along those lines . . .

His jeering contempt for what he called “uplifters” (in the South, the species is known by the sobriquet, Yankee) was Jefferson and Paine extrapolated. The Sage of Baltimore cut through the “flapdoodle” – as he put it – noting that “uplifting” always came at gunpoint. Paid for with other people’s money –  and at the cost of everyone’s liberty, including those allegedly “helped.” If one man can be enslaved – to whatever degree – for the benefit of another man, then any man may be enslaved, the degree to which ever increasing as inevitably as the progression of tooth decay.

Look around. Is it not so today? 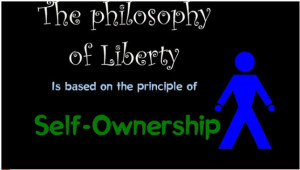 But – like many – it was Rand who poured gas on my fire. She wasn’t the first to systematize the philosophy of liberty, but hers were the first works I read that did. She refused to countenance any infringement upon the sovereign I.  We each own ourselves – and no one owns (and thus has no right to control) anyone else.

Everything follows from this.

The scales fell from my eyes.

I sought out others – Bastiat, Leonard Read (FEE, for those who remember that outfit), Spooner . . . all the classics. And came to know the “Occam’s Razor” of the non-aggression principle (NAP). This is the ethical notion – the principle – that you are obliged to leave other people be. And they, you. Or at least, do them no harm – provided they’ve done no harm to you first. This is a simple but also extremely profound doctrine.

No first-use of violence. 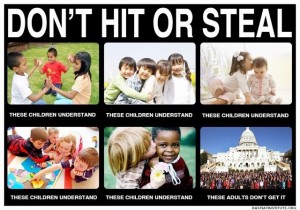 At a stroke, it parses – it shames – the subjective, ends-justifies-the-means thinking (rationalizing, really) of the Left and Right. It eviscerates the demagogic, emotional verbiage used so effectively by both conservatives and liberals to undermine and (ultimately) outright destroy human liberty.

It is the means by which to reject them both – and thus, to defeat them.

You do it by confronting them with the violence they so casually and elliptically but relentlessly espouse. By not allowing them to hide behind smarmy euphemisms (e.g., “our” children) nor allowing yourself to get caught up in a debate about efficiencies, whether so-and-so deserves to be “helped” (or not). Hitler built great highways; Stalin great industrial plants  – both of them over the dead bodies of millions of victims. 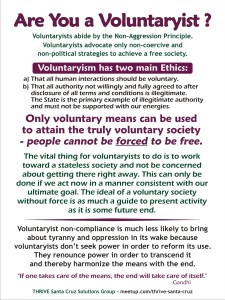 Never let them evade the murder and mayhem they live by.

Their vulnerability to such a direct challenge of their nostrums is immense.

Consider: Most people already embrace the NAP on a person-to-person level. They  avoid doing wrong things – like attacking other people or taking their stuff – because they know it’s not right.

If the organized gang called government disappeared tomorrow, most people would not become thieves, or rape their neighbor’s wife.

Most people would (per Paine) behave decently – not commit aggressive violence – because most people already instinctively follow the non-aggression principle in their everyday dealings. And not out of fear of punishment or because “it’s the law.”

They act decently because it’s the right thing to do.

This is a powerful weapon.

How many of you reading this would personally waltz over to your neighbor’s home and threaten him with violence in order to compel him to give you money – or “help” you or “fund” some project you deemed worthy? No, of course not. You might ask for your neighbor’s cooperation – or his help. In a friendly, non-threatening way. Understanding – and accepting – that he has every right to say no. And that you have no right to take things further, by force.

Think about this – and the light just might come on for you, too.

If you liked this article, spread it via Twitter: LibertarianCarG (they would not let me have “guy”).

And: We depend on you to keep the wheels turning.  If you value alternatives to the MSM, please support independent media. Our donate button is here.