Among the heavyweights – diesel-powered 2500 series pick-ups – there are just two contenders:

Both are brass-knuckled, big-armed humungoids capable of pulling over 16,000 pounds and boasting torque numbers in excess of 750 lbs.-ft. that make even the biggest big block gas V-8 seem a little light in the loafers.

Are you ready to rumble?

The Silverado 2500 HD is a full-size, heavy-duty truck with beefier construction and more capability than a 1500-series pick-up. The tested model was equipped with the optional 6.6 liter Duramax diesel V-8 and six-speed Allison automatic transmission.

The truck can be ordered in regular cab, extended cab and crew cab configurations, with short (6.5 foot) or long (8 foot) beds and 2WD or 4WD.

Base price for a regular cab Work Truck is $27,965. A top-of-the-line LTZ Crew Cab starts at $44,255. The Duramax diesel engine is a big-ticket option, with a sticker price of $7,195. If you select this engine you must also buy the mandatory six-speed Allison automatic, which adds another $1,200.

Since the diesel-equipped Silverado 2500 HD is so much more expensive than gas V-8 versions of the Silverado 2500 – and has capabilities far beyond the gas-powered version – it can be considered a sub-model in its own right and will be the sole focus of this write-up.

Chevy has also bulked up the already stout fully-boxed steel frame and made some changes to the front suspension for increased strength, including new-design forged steel upper control arms that up the front axle weight rating by 25 percent. If you want to hang a snowplow blade on your ’11 2500 HD, this will be welcome news.

Class-leading power and capability; the 2500 Chevy with the Duramax V-8 has higher maximum torque output and can pull more weight than the previous Numero Uno, Ford’s F-250 equipped with the optional PowerStroke diesel V-8.

Exhaust braking is too cool for school.

Rides as smoothly and quietly as Bentley once underway.

Forbidding price of entry to get that Duramax V-8. With the Allison transmission, you’re looking at $10k in drivetrain options alone.

Down-the-road maintenance costs probably will be higher than you’re used to.

In a truck this big, the road sometimes seems too small.

For comparison, the 6.0 liter gas V-8 that’s the Silverado 2500’s standard powerplant produces 380 lbs.-ft. of torque, or just a little over half the output of the mighty Duramax.

The Dodge Ram is way back there, maxing out at 12,000 pounds (17,000 with fifth wheel). It’s not even in the same league as the Silverado Duramax and Ford F250 PowerStroke if the measure is power/capability.

Mileage figures for the Duramax V-8 weren’t available at the time of this review, but should average out to about 18-19 MPGs.

Piloting a rig like this is Big Fun – if you are into big trucks. The next step up, after all is pretty much a Kenworth.

Even so, you are pretty close to that already.

The Silverado 2500 Duramax even has exhaust braking, just like a big rig. When engaged, an electronically controlled butterfly valve in the exhaust system closes, restricting the exhaust flow – which provides an engine braking effect that helps prevent the vehicle from building up excessive speed, without the need to constantly ride the brakes. This provides both a safety and a wear and tear advantage. The vehicle is less likely to become a “runaway truck” when going down a mountain pass – and your brakes should last longer, too.

The Duramax diesel is a manly powerplant, but you can tune out its testosteronic rumblings by the simple act of rolling up the windows. Once the cabin’s sealed up, the diesel sounds fade into a pleasant background burble. The six-speed Allison transmission is quiet and smooth – and the ride quality is as stately as the QE II, courtesy of body-on-frame construction and the use of hydraulic biscuits between the body and the frame.

It’s easy to steer; but the turning radius is definitely wide load. This is true of any truck in this class. Behemoths don’t like U turns or parking spots at shopping malls designed for Camry-sized cars.

I’m 6ft 3 and weigh 210 pounds – which makes me taller than most and bigger than many. But even I have to literally climb aboard the Silverado – and the bed’s walls are so high that I feel 10 years old again, trying to get at cargo. No question, this beast can haul three times what my puny little Nissan Frontier can. But except for hauling 4×8 sheets I find that a compact truck is easier to use for everyday jobs, such as hauling trash to the dump.

Still, there are things this lunker can do without breaking a sweat that my Frontier better not even think about trying. It could literally rip the frame out from under my little Nissan and leave the body sitting there by the side of the road. A truck like this is built of serious work – and it will make serious people very happy.

My test truck had the three-across front bench with the center section that converts into a console/arm rest. There’s an additional storage compartment built into the seat bottom that is huge enough to sash several large handguns and plenty of ammo – or whatever else.

The one major potential negative is the hassle/expense that comes with the newly mandated “clean” diesels.

Not just the Duramax – all of them.

By law, emissions of nitrogen oxide (NOx) have to be down 96 percent from allowable 1996 levels. To get there, Chevy has added what they call Selective Catalytic Reduction, which uses a mix of diesel fuel (injected into the exhaust to raise temperatures), industrial-grade urea and deionized water held in a 5.5 gallon storage tank that’s sprayed as a fine mist into the hot exhaust stream, ahead of the catalytic converter.

This triggers a chemical reaction that converts the NOx in the exhaust into water vapor and nitrogen gas before it exits the tailpipe.

The tank will need to be topped off as the mix gets low; if you don’t, the engine’s controller will go into “limp home” mode, with speed limited to 40-55 mph.

Finding urea for top-offs will mean stopping in at the dealer’s more often, or frequenting truck stops – as these are pretty much the only places that sell the stuff right now.

As for how often, Chevy says it varies with the “duty cycle” the truck is subjected to, but expect to have to do the drill every third fill-up, at a cost of $20-$40 or so.

GM claims the Selective Catalytic Reduction system is 5 percent more efficient than other systems in use, potentially resulting in $2,400 worth of fuel savings over 200,000 miles.

But that “savings” may amount to a lot less, once you factor in the cost of feeding the thing urea at $20-$40 a pop once or twice a month. Plus the extra diesel that gets sprayed into the exhaust to torch things up and cut down the smog.

New “clean” diesels like the Duramax also have particulate filters that add another layer of over-the-road operating costs, vs. older diesels that weren’t fitted with all this anti-smog stuff.

Better for the planet? Maybe.

But not so much for your wallet.

The bar has ben raised for all-out power and capability. No doubt Ford will answer with an even more potent version of its Powerstroke diesel. Dodge will have to come up with something more credible, too. In the meanwhile, Chevy is the new undisputed heavyweight champeen among 2500 pick-ups. 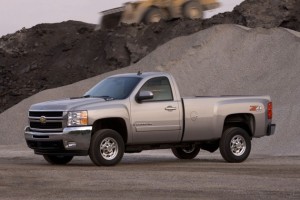 AGW Gives a Lesson in Freedom