The good thing about a bad car name is you’ve got no expectations; nothing to live up to – and so, little to disappoint you. But wasting a good name on a bad car is almost a moral crime.

Here are ten good car names gone bad – ruined forever, through no fault of their own:

This name summons images of gallant horsemen protecting their monarch – though it’s not likely many owners of the prematurely obsolescent, shoddily constructed, recall-prone  economy car that bore this name ever felt like a king. The Cavalier was like Cheese Whiz  – mass produced and mediocre. It was infamous for perpetually failing head gaskets, a bouncy clown car ride and the lowest grade plastics this side of a Mattel action figure. You didn’t drive one because you wanted to, you drove one because you had to. Someone either gave it to you – or the dealership was giving them away.

And in turn, you got rid of it as soon as you could.

Kind of has a nice ring to it – and might have worked out had it not been affixed to one of the final death rattles of Chrysler Corp. before it went bankrupt (the first time) in the early 1980s – and from there to K-Car rehab. The shovel-nosed, fastback 1980-’83 Mirada offered, among other treats, leaky T-tops and rear-wheel-drive when both were going out of fashion – and one of the weakest V-8s ever constructed, a 318 cubic-inch embarrassment belting out a dismal 130 hp. (See also: Chrysler Imperial and St. Regis.) If only they’d put a 360 (or better yet, a 440 big block) into this one, it would have escaped this list.

It sounds tough, like the relentless robotic assassin in “The Terminator” movies – but it was just a rouged-up (and marked-up) Chevy Chevette sold under the Pontiac nameplate. GM’s idea was that buyers would actually pay extra for a Chevette with a more masculine name.

The hilarious thing is, many did.

Normally, the Porsche name commands respect and admiration. With this exception. Packing an 80-hp VW-derived flat-four not much different from what you’d have found in a same year Super Beetle, this car almost singlehandedly ruined Porsche’s reputation. It was mocked as the “Poorsche” by afficionados – and routinely humiliated on the streets by cars costing half as much. Later 914/6 variants were an improvement – but the damage was done.

Built for just two short years, the final iteration of Pontiac’s second-generation (1970-’81) F-car was the ultimate Disco Machine: a completely toothless tiger that could barely heave itself through the quarter-mile traps in under 17 seconds despite the wild graphics, air dams and “turbo” decals plastered all over the thing. Like Brando, there was all kinds of potential; it coulda been a contender – but turned out a sloppy punch drunk palooka that embarrassed itself wherever it showed up.

Truly a cruel irony that this otherwise unobjectionable car name was given to perhaps the most blandly styled, forgettable sedan Acura ever made. Solid? Well-built? Great value? Absolutely. But it’s as much a travesty of language to describe this car as “legendary” as it would be to call Ellen Degeneres a “hottie.”

The Focke-Wulf Fw190 was a superb WWII fighter and that association alone might have been sufficient to give any car to bear the same name a decent head start. Too bad Benz decided to go K-mart by christening its first downmarket model – replete with weak four-cylinder engine and iffy build quality – with the same once-proud designation. Though later examples got better, the stain on the carpet left by the initial batch of 190s can never be scrubbed away.

Just saying it sounds pretty cool (especially if you’re James Earl Jones, who did the voice overs for the commercials). Too bad the car itself – a K-car based, front-drive pretender – was so lacking in the powers of The Force. Even worse was the way this car expropriated and sullied the legacy of the old V-8 Daytonas of the late ’60s. (See also: Chrysler Laser.)

Louis XVI would surely prefer another trip to the chopping block than having to endure the association of his fabulous palace with a pretentious Ford Granada. An example par excellence of Detroit badge-engineered, bait-and-switching at its most contemptuous. The Versailles showed the world that people will pay Lincoln money for a Ford with a fake vinyl roof and knock-off wire wheel covers.

Another not-bad name forever tainted by the freakish, over-digitized, not-ready-for-primetime atrocity that bore it. Aston Martin has produced some gorgeous and memorable machinery; but the Lagonda – with its bizarro angular body and cheesy, early ’80s Atari-style all-digital interior – isn’t one of them. The electronics were so unreliable that early cars were often literally undriveable – though on the upside, the ugly futuristic shape of the car eventually made it useful as a background prop in low-budget sci-fi flicks like “Robo-Cop” and “Judge Dredd.” 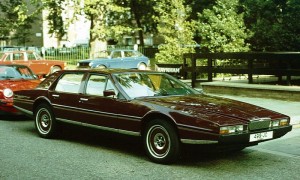