It’s ironic that the company that first mass-marketed the minivan is the last one still making them – among Detroit’s Big Three, at least.

GM and Ford no longer sell a traditional minivan. They’ve been replaced by sportier-looking “crossovers” – leaving the Chrysler Town & Country and its lower-cost Dodge equivalent, the Grand Caravan, the only American-brand minivans left on the market.

So, if you want a traditional minivan – and want to buy American – there’s pretty much only one option.

But is it a good one?

Chrysler’s precarious financial situation has stalled updates to virtually its entire model lineup. The ’10 Grand Caravan is therefore almost identical to the ’09 version, with the exception of “active” (anti-whiplash) front seat headrests now being standard equipment on base models.

Literally dozens of crossovers and other types of vehicles  offer comparable versatility and equipment in a much more appealing package.

The Kia Sedona is a lot less expensive – and comes with a much stronger standard engine and significantly better warranty.

Handles like a half-full beer keg, lurching heavily in the corners – unless you drive like the proverbial little old lady.

Chrysler may not be around a few years from now.

Standard equipment in the base C/V and step-up SE is a 175 hp 3.3 liter V-6. A four-speed automatic is teamed up with this engine.

It’s not a bad engine, as such – but it’s barely adequate given the Hummer-esque 4,300 lb, curb weight of the Grand Caravan before anyone climbs on board. Its 0-60 time of around 10 seconds is slightly slower than a Toyota Prius hybrid; with a family of four on board, the Grand Caravan’s 0-60 time can be 11 or 12 seconds – not far off the pace of ’80s-era economy cars like the Chevy Chevette. In today’s fast-paced driving environment (more traffic, higher speed limits) that’s too slow for comfort. Making matters worse, gas mileage is about what you’d get with a V-8 SUV – only without the power or the capability: 17 city, 24 highway.

The next-up engine, a larger 3.8 liter V-6 that offers 197 hp, is a much better choice. It also comes standard with a fully modern six-speed automatic transmission.

Performance with this engine is acceptable (zero to 60 in under 10 seconds with people on board) and gas mileage dips only slightly: 16 city, 23 highway. The big downside, though, is that you have to buy the more expensive SXT trim, which starts at $26,480, to get this engine.

The SXT trim also can be optioned with a larger, 4.0 liter, 251 hp V-6. It also comes with the six-speed automatic. This engine delivers very good acceleration (0-60 in about 8.8 seconds) for a minivan. Gas mileage with this engine is actually better than with the weaker 3.3 liter engine at 17 city, 25 highway – proving that a more powerful but less stressed engine can be more efficient than a weaker, overmatched one.

All Grand Caravans are front-wheel-drive.

When there were no other viable alternatives, buyers – male buyers especially – put up with the gawky image, wheezy acceleration and schoolbus-style handling dynamics. You pretty much had to, if you wanted a vehicle that could cart around  five kids plus mom and dad up front. But the new crop of crossovers offer similar spaciousness and practical capabilities in a much better-looking (and usually, far better handling) package.

Once it’s up to speed – and if the road is straight – the Grand Caravan hums along like the small-scale schoolbus it is. But in corners of any kind it lurches and heaves like the SS Minow – and you don’t have to be entering these curves at 20 over the recommended speed to experience this, either. The standard four-speed automatic is clunky and ancient-feeling (virtually every 2010-2011 vehicle, including the Dodge’s main competition, the Kia Sedona, comes standard with at least a five-speed automatic), magnifying the underpowered 3.3 liter engine’s weakness. Things are better with the top-of-the-line 4.0 liter engine and six-speed automatic – but for $21,245 (vs. more than $27k for a Grand Caravan SXT) you could buy the base model Kia Sedona and get a similarly powerful V-6 (3.8 liters, 250 hp) and have about five grand left over in your pocket.

Looks-wise, there’s not much to say. The basic minivan shape is and has been more or less the same across the years and irrespective of manufacturer (with the exception of those funny dust-buster vans GM built in the late 1980s). It’s all about function, not form. The van has a low step-in height and easy access from the sides (dual sliding doors) or the back (large tailgtate), like pretty much every other minivan.

Grand Caravan does have some unique touches, though – including an available stowable card table, and Swivel ‘n Go seats that swivel around completely to face rearward, if you like – so that second and third row occupants can ride booth-style, with the card table between them. This versatility – along with a long list of electronic entertainment options (including Sirius satellite TV and a 30GB music storage hard drive) is still the Grand Caravan’s chief merit.

I personally don’t especially like minivans but that’s neither here nor there as far as whether you like them. However, Dodge’s spotty quality control and noticeably inferior materials, fit and finish (as well as a higher-than-average record for problems) are very real red flags that should be taken as your warning to think long and hard before signing up for this vehicle. Especially given the minimalist three year/ 36,000 mile basic warranty coverage. Dodge does give you a five year/100,00 mile powertrain (engine and transmission) warranty but over at the Kia store, you’d get a considerably better five year/ 60,000 mile basic warranty and a vastly better 10 year, 100,000 mile powertrain warranty if you bought the Sedona instead.

The 10 year powertrain coverage is extremely reassuring, since it covers the really expensive/catastrophic stuff for a period that’s years longer than it will take most people to pay off their note. The Grand Caravan’s powertrain warranty, meanwhile, ends right about the time you’ve paid it off.

On the upside, you can’t fault either the Grand Caravan’s crash test scores (best possible in both insurance industry and government testing) or its many standard safety features that include ABS, traction/stability control, full-length curtain air bags and anti-whiplash “active” driver and front seat passenger headrests. You can add rear parking sensors, back-up camera and an interesting Cross Path system that audibly warns the driver if there are other vehicles coming from the side to help avoid T-bone types of accidents.

While still a supremely adept kid-hauler, there are better (and less expensive) choices – including the lower-cost, better-warranted, more powerful and likely more reliable Kia Sedona. 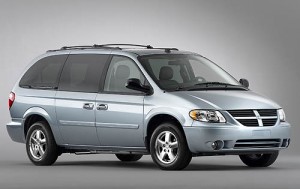