This just in – from the Department of Annoying Technology:

Imagine an accelerator that doesn’t want you to (accelerate, that is) and you will understand the essence of Nissan’s new gizmo. Designed to “assist drivers to become more fuel-efficient,” in the words of Nissan PR, the system works by increasing resistance on the gas pedal – and even pushes back against your right foot – if the car’s computer thinks you’re “using more fuel than required.”

Right now, the system’s in the demo phase but Nissan says it hopes to bring it to market “soon.”

The automaker says the system will be either optional or will be set up so that the owner/driver can turn it off at will. But if this isn’t the answer to the question one asked, what is? More ominously, this technology could be yet another brick in the wall of the speeding-free future lusted after in certain quarters. Onboard receivers/transmitters could communicate with roadside “smart” speed limit signs, telling your car’s computer thus fast – and no faster.

And it’s just around the corner. Which brings us to… .

Technically, BMW hasn’t given its new gadget a name yet, but iSpeed seems appropriate – except for the fact that it is intended to accomplish precisely the opposite; that is, to keep you from speeding.

The next-generation 7 Series ultra luxury sedan will reportedly be equipped with scanners capable of reading speed limit signs and curtly informing the driver when he’s going faster. What do you suppose the next step after that will be?

It is capable of reading both static signs and those changeable electronic displays used in some areas.

Unlike the heavy-handed (or footed) Nissan system, BMW’s is passive (for now)  in that it does not actually attempt to impose its will on the driver. Yet. That’s one small blessing. Also – for the moment – it will be Euro-only deal. Apparently, American road signage is still too confusing a mishmash to be easily reconciled with BMW’s electronics. So only European versions of the new 7 Series will feature the system.

It appears the automakers are working feverishly hard to take the driver entirely out of the equation. Or at least, to throttle him so effectively that to call him a “driver” is to abuse the language. I rage against this process. “Safety” and “efficiency” are not the main reasons for getting behind the wheel of a car.

At least, they aren’t for me.

I get in a car both to get somewhere and to drive – two related but not identical things. It is the whole point, the entire reason, for  owning any car that’s more than just a simple conveyance.

What kind of sick Catch 22 is it that Nissan – a company that builds brilliant machinery like the 370Z – is also working hard to make it virtually impossible to make use of such machinery? Why even bother? Maybe Nissan ought to be building nothing but an endless production line of autonomous Jukes and Cubes – differing from one another only in color and whether this one has an MP3 player and that one a sunroof.

Qualudes in the glovebox could be optional.

Whatever happened to “Ultimate Driving Machines”? The engines are still magnificent, the steering and suspensions a near-perfect ying-yang of reflex and compliance. Yet lately there’s so much crap to fight that it make you want to give up and take the bus instead.

I find myself reminiscing about older, less encumbered BMWs from the days when the only “controls” facing the driver were a steering wheel, three pedals and a shift handle. If you needed to change the radio, you turned a knob. Directing the car’s progress was entirely up to you.

It was what made it all worth doing.

Maybe the automakers have run out of useful things to improve. The internal combustion engine has reached its zenith after 100-plus years of continual refinement. Suspension and tire and braking technology is now capable of only minor, incremental improvement. The Great Leaps Forward of 20 odd years ago  – from disc/drum brakes to four-wheel-discs to four-wheel-discs with ABS –  are pretty much done with. How much bigger/wider can wheels get? And so on. 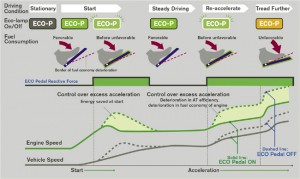 This leaves idle hands – and PR departments desperate to justify this year’s “latest thing.” Since the basic technology of the car, itself, is at or very near perfection, they are resorting to the undiscovered country of vehicular big brotherism. Cars were virtually free of interference until, oh, 15 or 20 years ago. So there is lots yet to do.

And they’re just getting started… .