By the time the end came in 2002, Oldsmobile was already effectively dead. GM had moved on to other tarts such as Pontiac and Saturn (they too would lose their heads within another few years) and quickly forgot about its former amore – the division that had once been a favorite both within and without.

Within, for the money it made the company. Without, for the stylish and powerful and often-innovative cars that carried the rocket crest.

Of these, a sky blue or metallic chocolate brown 98 sedan must be acknowledged as a true exemplar of the breed. It may not be quite a Cadillac – but it often came pretty damn close.

Oldsmobile’s largest road hog was the 98 sedan and its most massive incarnation appeared in 1971 – just in time for the first OPEC oil shocks, inflation and (very shortly thereafter) waning public interest in single digit gas mileage.

But as the last Hurrah of Hefty, the fifth generation Ninety-Eight made no apologies to anyone.

It was true leviathan – pushing 20 feet long from the rocket badge on its nose to the tip of its stubby rear tailfins, which were styled to look Cadillac-esque and also to differentiate the 98 from the lesser-ranked Olds 88, the division’s “entry-level” large sedan – which had no fins at all.

The ’71 98 rode on a 127-inch wheelbase – three inches longer than the 88’s – and tipped the scales at an Atlas-squashing 4,533 lbs. fully dressed. Standard under the hood was a low-compression version of the Rocket 455 V-8, rated at 225 hp under the new SAE “net” standards that were coming into effect.

Buyers could upgrade to a more powerful version of the 455 with 250 hp.

By modern standards, 225-250 hp out of a 7.5 liter V-8 may seem a sloppily inefficient use of all those cubic inches. And in a way, of course, it was. Modern engines of half the displacement easily make as much or more horsepower – but the difference that makes all the difference is that you have to work those little engines to get it. Cast iron lunkers like the Olds 455 specialized in diesel-like torque output at extremely low engine RPM. We’re talking 350-plus lbs-ft.of torque available with the engine barely running at a fast idle – and another 50 on tap if you revved the huge V-8 a few RPMs higher. This was just what the Dr. (Dr. Oldsmobile, perhaps?) ordered – when the prescription called for getting all that mass moving.

And not just moving, but moving easily. The whole object of a top-tier luxury barge back in the early-mid 1970s was gentle, forceful forward progress. And this the 455 Rocket was born to deliver, every time the driver eased into the gas pedal. There was no tachometer – such piffle was unnecessary. Just a foot-long speedometer with readouts as broad as the V-8’s torque curve. An un-killable THM400 three-speed automatic mediated between the 455, your right foot and the unfortunate pavement beneath the wire-wheeled and whitewall-shod rims. If you so desired, laying 30 yards or more of rubber was one stab of the gas pedal away.

Style-wise, the 98 was an interesting counterpoint to the similarly proportioned but less a sheetmetal David Lee Roth than Cadillac’s Sedan de Ville. It had smoother lines overall and tended to be rounded off where the Caddy was angular. Slight fender flares around the lower rocker panels extended outward to protect the finish against stone chips as well as add some subtle flair. Rear skirts added an elegant touch.

Chrome trim was not excessive – and nothing stuck out or especially called attention to itself.

The whole point, from Oldsmobile’s marketing perspective, was to offer buyers a stately and handsome car that wasn’t as gaudy as its Cadillac cousin. Also, one that was almost as opulent on the inside.

In addition to pillowed and tufted bench-style seats (with grab handles and storage pouches for rear seat occupants, frameless door glass (power activated, naturally), cruise control, pulse wipers, Tempmatic air conditioning and electric rear defrost, the 98 was one of the first GM cars (and first cars, period) to offer air bags as optional equipment (in 1974 and continuing through 1976). Oldsmobile marketed these as Air Cushion Restraints – and was asking $700 for them, a big ticket item on a car that carried a base price (in ’74) of $5,303.

Not surprisingly, few cars were so equipped – and with 4,500 lbs. of mass in your corner, the air bags were hardly necessary. But they were on the menu, nonetheless.

In addition, buyers could upgrade their 98 to Regency status (beginning with the ’72s), a new top-of-the-line trim package which was launched to commemorate the 75th anniversary of Oldsmobile. The package was coordinated with high-end jeweler Tiffany & Co. of New York. Each 98 Regency featured a quartz crystal Tiffany clock in the dashboard, Tiffany Gold Paint, “pillow effect” crushed velour seats – and was also registered at Tiffany’s. Even the keys were special. Lost keys could be dropped in any mailbox and would be automatically returned to the owner.

For ’75, Olds added a theft-deterrent system to the options list that flashed the headlights and sounded the horn if a break-in attempt was detected. Backlighting for the drivers side door keyhole was incorporated, too – and in keeping with the times, an engine vacuum-based fuel economy gauge was added to the instrument cluster in order that owners could see at a glance how rapidly they were helping to deplete the world’s supply of crude oil.

In 1977, Oldsmobile trimmed the fat considerably with the introduction of a new 98 that was almost a foot shorter overall (221.4 inches) and which had lost eight inches of wheelbase (down to 119 inches) and about 700 pounds. Also gone was the Rocket 455 – replaced by the small block 403 (which was basically a large-bore version of the Oldsmobile 350 V-8). It was still a substantial beast, even so – and retained most of the essentials that made earlier 98s such enjoyable boozy cruisers. The 403 churned out ample ow-end grunt, the “Prima” velour was still pillowy, wire wheels still flew off if you tried to take a corner too fast – and the trunk was more than large enough to handle a few bodies rolled up in carpet, if you happened to be “connected.”

Oldsmobile would continue to tweak the basic ’77 design all the way through the 1984 model year before the changeover to the new front-wheel-drive layout. Olds probably should have done the decent thing and retired the 98 nameplate but chose instead to continue using it on meager pretenders (including a hideous bathtub-styled thing that arose in ’91) that eventually helped put Oldsmobile into the ground for good in 2002.

* Convertible coupes had been offered previously but were dropped after the ’70 model run ended.

* Technically, only the ’72 Regencys are also 75th Anniversary models; about 2,650 of these were built, according to records.

* ’74-76 models equipped with the optional air bag system are extremely rare; at most a few hundred of these cars were built as most buyers did not feel the need for the extra expense of the new (and unproven) safety technology.

* ’70s-era Oldsmobile ads implied a custom built touch with the slogan, “Can we build one for you?” 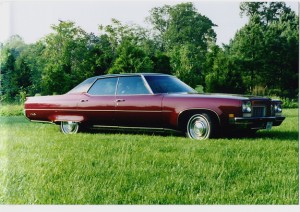