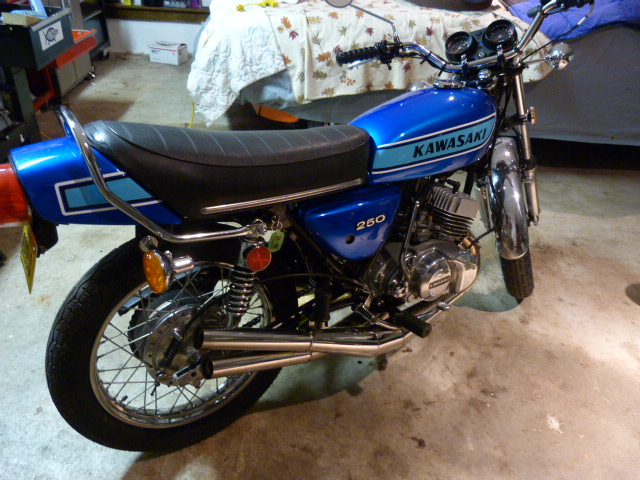 Yesterday was one of the first warm/dry days we’ve had up here in The Woods of southwest Virginia, so I decided to step away from the keyboard and unshroud Little Stinker – my ’75 Kawasaki S1 250 – which had been collecting dust these past several months, like an Egyptian pharaoh under the pyramids.

This bike is my least reliable bike but I love riding it. Or even just listening to it. The thing is like that girl you dated who was everything you didn’t want in a wife but who did it for you like no other woman you ever spent time with.

It is balky, primitive, dangerous and sexy – exactly what you want for a certain kind of experience.

Your first indication of the right kind of trouble awaiting you is the lean. Not in the curves – don’t do this on any old Kaw triple or you will regret it; the wobbly stamped steel frame isn’t set up for that. This is a bike for keeping upright – and vertical. More on that in a moment.

It almost lays over on its kickstand, invitingly baring its parts. If you approach from the right side, you will get the best view – of two of the bike’s three jaunty exhaust pipes, which curl back from the finned aluminum heads and then splay backward like Satan’s bagpipes. 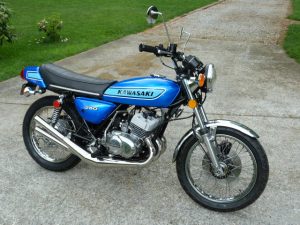 This is no dance of the seven veils, everything is exposed – unlike modern plastic shrouded things. The castings and covers are beautiful, alternatingly polished, chromed or rough bare alloy.

There is a wasp-waisted tank painted gorgeously in color schemes you never see anymore – in my bike’s case, something Kawasaki called Halibut Blue – offset by “KAWASAKI” lettering that also leans suggestively, like the bike itself. The tank holds not much fuel – a tacit admission of its limited radius of action. You generally had to stop to clean the spark plugs (there are three spares under the seat) before you had to stop for gas.

The Kaw burns it deliberately. Its three cylinder engine – which at 250 cubic centimeters is the smallest three cylinder engine ever mass produced – is a two-stroke engine. Which is why it smokes constantly. This is an indication of mechanical health. If the smoking stops, you have trouble. It means the oil injection pump has stopped feeding vital lubricant to the pistons, which will very shortly weld themselves to the cylinder liners if you don’t shut down immediately. 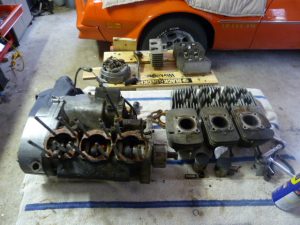 Smart Kaw owners failsafe the factory oil pump by adding more oil to the gas, just in case. This has the effect of increasing the smoke but that’s okay. It’s like more fireworks  on the Fourth of July.

The little engine is also an incredibly simple engine.

It has no valvetrain – just ports.

The pistons open and close these ports as they go up and down, which they do with great rapidity, like a chainsaw revving – which is basically what this is, except times three. As a  port is exposed, air is gulped – along with gas and oil. A heady musk of internal combustion exits from the opposing port, as it is uncovered. 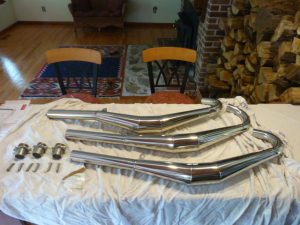 Each of the engine’s three cylinders operates largely independently of the others; no common valvetrain –  and no common fuel ignition system, either. Each cylinder has its own carburetor, which isn’t unusual for pre-computer/pre-fuel-injected multi-cylinder motorcycle engines. But individual ignition – not just individual coils – is pretty peculiar.

The bike has three sets of points; the timing for each cylinder must be set just so.

But when everything is set right, the triple – as these old Kaws are affectionately referred to by those who have been intimately involved with them – sounds like no other motorcycle and arguable better than any of them. 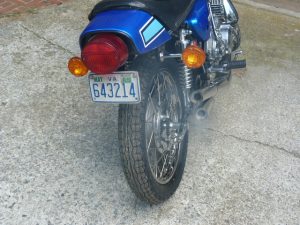 It is a brutal, angry sound. An alternating staccato snapping and popping from the three exhaust pipes, rising in pitch as the engine is revved. Each pulse staggered in relation to the others. You can separate out each cylinder’s exhalations by sound – and by sight. The bike visibly puffs with each pulse, like your breath does when you breath hard from the cold in winter.

Do you dare to ride?

The unknowing will say sure; it’s “only” a 250, after all. Harmless. They are like the reef diver who reaches his hand into a dark burrow in the coral, hoping to take home a keepsake. The moray eel within takes a few fingers. 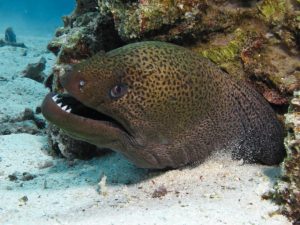 This 250 is a two stroke, remember. Which means it makes twice the power of a same-size four-stroke machine. It also makes power viciously, either On or Off- with On coming at about 4,000 RPM on the tach. Hit that without being ready and you will understand why these bikes had another name, back in the day.

People forget because two-strokes have been outlawed on the streets – well, outlawed to make for street bikes – lo at least 30 years now. Those who are hip are either Old Freaks who were there – or younger ones, like me, who got inducted into the brotherhood ex post facto.

Four strokes build power in a predictable crescendo. Two strokes are as unpredictable as a lethal lizard that seems quiescent – until it lashes out and its fangs already deep in your flesh, pumping venom.

Nothing happens at first. There is so little power the engine will stall unless you feather the clutch and even use your feet to get her rolling. A slug, thinks the novice. He rotates the right grip and the bike starts to wake up. But the rider is relaxed; his thighs not gripping the tank as he would if he knew. 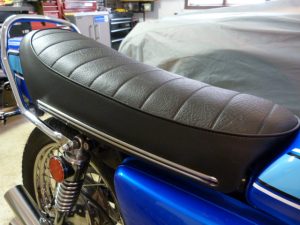 At 4,000 it happens. The power curve spikes as the three chainsaws go berserk. The front end of this 250 gets loose as the weight shifts to the rear. Which it will, if the rider isn’t ready. He will slide backward on the suicidally flat seat. Flabbergasted he forgets to dial back the throttle and the revs are now 9,000-plus and there is air under the front wheel of the 250.

Soon, he will have a very nice view of the clouds.

There is also a 750, for the truly demented, sick and depraved. They made them in purple, too. To match the color of the welts and contusions. 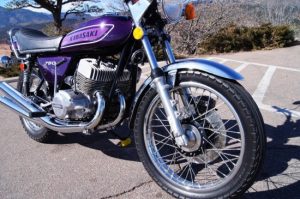 Assuming a horizontal orientation is recovered, there is the matter slowing down. The bike could use a drag chute. The brakes – factory equipped drums on both wheels – are  gorgeously useless. I made mine marginally useful by replacing the front drum with a slightly more effective disc pirated from another/newer Kaw triple.

These are serious bikes as well as sexy ones. They are not for the poseur – nor the poltroon.

But they are exciting and compelling and alive in a way that nothing new can approach.

If you get the chance, ride one and see.