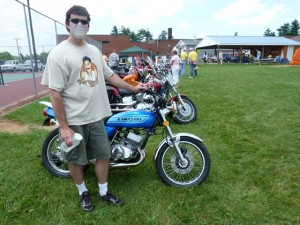 I did an informal demographic survey – speaking to as many of the vehicle owners as I could. Most of them were older than I am – and I am in my mid ’40s. Several were 60-plus. Some older than that. Not one was appreciably younger than me.  There was one guy with a nice early ’70s Chevy Monte Carlo. He and I talked about our high school days – back in the early ’80s. Another guy with a nice ’93 Mustang GT – almost 20 years old, already! – was parked next to my ’76 Trans-Am (which I also brought to the show). He looked 50-ish. The guys with the ’50s stuff – a Ford Fairlane, two very nice ’57 Bel Airs (one a convertible), a Studebaker Lark – all of them graybeards. Or hairs.

Same with the bikes. There were maybe a dozen or so – which is a good turnout for a mostly car show.  There was Frank – with his red BMW. Frank is old enough to be my father. A ’40s Harley with a sidecar was parked nearby. Its owner was also ’40s  vintage. Etc.

There were a few young kids – but not one teenager, there on his own.

A lot has changed since I was a teenager.

In my mind, I dial the clock back to about 1983. I went to a lot of vintage car shows and cruise nights. So did most of my friends. In fact, we all went together. Friday and Saturday nights were “car nights.” We’d hang out at McDonalds – along with a large crowd of other teenagers – or at the local shopping mall parking lot – and check out the cars. No, scratch that. We’d check out each other’s cars.  Because we – the teenagers of the ’80s – owned (and worked on) old cars. Muscle cars, ratty cars – all kinds of cars. The type was incidental. What mattered was that we were into cars. Unlike now, back then, the majority of the car owners – and spectators – at cruise nights and car shows were young. Very little in the way of Just For Men was in evidence. 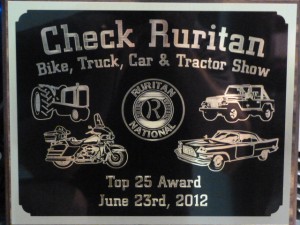 Same with the mags – you know, glossy monthlies like Hot Rod and Car Craft. It is very interesting – very revelatory – to thumb through the old issues and compared them with the current issues. I have a stack of Hot Rod magazines from my high school days. The pictures all show young guys – and the occasional young girl – under the hood or standing by the side of their pride and joy. The current magazines show these same people – now in their 40s, like me. I cannot recall a single photo spread detailing a resto or build-up in a recent issue of either Hot Rod or Car Craft or any other such publication that shows a picture of a guy (or girl) in his early 20s. Or even 30s.

Granted, this is all anecdotally based theorizing. But it’s based on a lot of anecdotes. I’ve been active in the car hobby since I was sixteen or so. I’ve been a professional car scribbler for more than twenty years. I’ve been to – and go to – many car shows. And based on what I’ve seen lately – meaning, over the course of the past ten years or so – the vintage car (and bike) hobby is becoming, well, vintage. Check Ralphs Ad and Fry’s Ad.

The young, by and large, do not seem to be following in the footsteps of their fathers and grandfathers.

Here’s another personal anecdote in re the above:

I know a guy, about fifteen years older than me, who – also like me – is really into vintage cars. He owns a ’70 Pontiac Firebird Formula 400 – a Ram Air III car, one of 13 made with the three-speed manual and literally no other options at all. It was built for drag racing. My friend also has a super rare Hurst-modified Grand Prix SSJ (did I mention he’s a Pontiac freak?), white with gold accents, including the 14-inch Hurst mags that came with the package.  Plus a nice driver ’79 Trans-Am (403/automatic). He has three sons – one in his mid ’20s the other just about to head off to college, the other in junior high. None of these boys has a vintage car – or works on cars – or (apparently) cares about cars at all, beyond their usefulness as appliances. 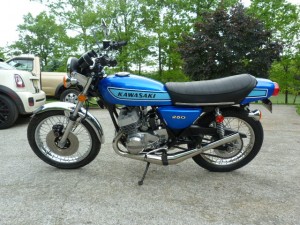 This seems to be the common meme among the coming-up crowd.

So, the question presents itself – why?

Inflation has made everything more expensive, because every dollar is worth less than the year before (maybe soon to be entirely worthless). It’s much harder to accumulate the savings necessary to purchase a “toy” car than it was when I was a young guy.

Over the past 20 years, most states have adopted (because they were heavily pressured by Washington) some form of what’s called Inspection & Maintenance (I/M) rigmarole which requires that all cars built after a certain year (either fixed, or “rolling”) pass an annual or semi-annual smog check. This isn’t too much of an issue for the really old stuff – cars built before the late ’70s – because the standards are lower and the cars themselves much easier to tweak/fix to get them through the test. But for newer, computer-controlled stuff – early-mid 1980s and newer, which would probably otherwise be the cars popular with today’s teens and young twentysomethings – getting by Smog Check can be much, much tougher. And much, much more expensive – which for teens and twentysomethings can become an insuperable obstacle.

The cars themselves are also much more expensive – both to buy and to keep up – to a great extent because of all the emissions (and “safety”) gear. Kids today can’t afford to buy the pre-government muscle cars of the ’60s and ’70s.  But the newer, government-mandated cars of the ’80s and ’90s have computers, fuel injection, dozens of sensors, complex wiring – which makes them much less affordable to fix up.

An example: I recently rebuilt the three carburetors in the S1. Even after sitting for 20-plus years, all it took was some solvent, a toothbrush and elbow grease to clean up the castings to as-new condition. Got a rebuild kit (floats, pilot and main jets, gaskets, needle and seat) for about $70. That’s it.  Contrast that with the cost of replacing an EFI unit – or even just a few critical sensors – each of which can cost more than I spent rebuilding the entire fuel delivery system (which consists of just the carbs) on the S1.

Exhaust: Back in the day a set of headers cost about $75 (even today, they’re not much more than that for a pre-smog car) and the rest was just pipes (cheap) and mufflers (affordable).
Today, you’ve got at least two converters in a V-8 application – and unless you use the low-flow POS generic ones, you are looking at $200-plus for each of them. Plus O2 sensors. So, easily $500-plus for just the converters and O2 sensors (and that’s a lowball figure).
Who can afford this? I sure couldn’t at 20!

Back in the early ’80s, you didn’t have to buy insurance. If you owned your old fix-it-up special outright (as most of us did) you could tell the insurance mafia to bugger off. Not anymore. Today, insurance is mandatory – which has made insurance even more expensive. For teens and twentysomethings especially. They get Group Guilted into paying exorbitant rates – even if a given individual teen/twentysomething’s driving record is spotless. It doesn’t matter. What does matter is that the insurance mafia can charge exorbitant rates based on Group Guilt – backed by government force. Fail to pay up – and you risk severe sanctions. Even though you’ve never caused anyone any harm. The bottom line is that insurance costs on performance cars especially are unaffordable for teens and twentysomethings. So, they don’t buy the kinds of cars that teens and twentysomethings did when I was in that demographic.

In the final analysis, all the red tape – the hassle and the expense – is a turnoff. So, the kids find other things to do – like online gaming or whatever else they can still do relatively free of government interposition and obnoxious cost.

So, the older crowd continues to carry the torch. We’ll do it for as long as we can. But how much longer can that be?