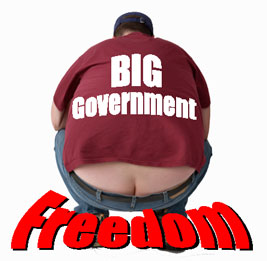 Things are bad – and many blame Big Business, such as Big Banks and Big Oil, as they’re styled, for turning the screws on average people. I’ve got no big love for either. The fact is they are interested in money – your money. That’s what they do. Are you shocked? But here’s the thing: If you’re careful with your money and apply common sense, you can avoid being indebted to entities such as Big Banks and even Big Oil. Because for the most part * their exactions are voluntary.

You do not for example, have to buy a $500,000 McMansion on a zero down five-year ARM that requires 40 percent of your take home pay to stay ahead of. No Bankster put a gun to anyone’s head to buy more home than they could comfortably afford. People freely chose to do so, banking (ahem) that the increase in value would counterbalance the high carrying costs. Well, they lost that bet. But whose fault is it?

No law says you must purchase a $40,000 car that broadsides you every month with a $600 payment. You can choose to drive a more affordable vehicle, perhaps one bought outright, with cash.

Personal anecdote: My wife and I moved from high-cost Northern Virginia not far from DC backin 2004 to rural SW Virginia in part to lower our cost of living in anticipation of the now-current economic problems besetting the country. We sold our place and bought a new, less expensive place, which enabled us to really buy the new place – outright – so that we have no mortgage.

Neither of us have ever bought a new car in our lives. Both our vehicles were bought used – with cash.

These two common-sense actions massively reduced the amount of money we need to get by. And no loan officer or debt collector plagues us.

The taxes on our modest place out in the country have risen by some 30 percent in five years (even as the market value of our house has dropped) and now the county has passed a new – massive – increase in the odious personal property tax on motor vehicles. The new tax rate will amount to an $800 annual fee levied on a vehicle with a market value of $25,000.

While we do not have high-dollar cars, we do have several cars (two older trucks and a couple of older motorcycles). The highest-dollar one we own is worth maybe $7,500. But we still end up with a beefy bill from the county for about $500 every year. To pay “for the children” – who aren’t our children, because we don’t have any – chiefly because we feel we can’t afford any. But because other people who can’t afford kids do have them, we and others like us get the bill. To pay for the local “education” (read: government indoctrination) system. The combined hit every year – the personal property tax on the vehicles and the real estate tax on our house and land – amounts to around $2,000. I understand that may not be huge by some standards, but it’s still a lot of money for us – and over time, it’s a lot of money, period. In just ten years’ time, the local wealth redistributors will have stolen – and yes, that’s the right word – $20,000 from us. For the privilege of owning things we already paid for (and paid taxes on at the time of purchase) with money that has also already been taxed.

It is a sum we can do nothing to reduce, other than by becoming homeless and divesting ourselves of our vehicles.

So, which is the more rapacious, relentless enemy of economic security? Of liberty? The businesses offering products or services we’re free to decline if we do the math and calculate we can’t comfortably afford the cost? Or the inescapable clutching claws of government – multiple levels of it – that constantly filches through our pockets?

Instead of “financial reform” and recriminations directed against Big Business, how about changing the law so that a man’s house, once paid for, is his. Period. No more rent payments in perpetuity to the county – the annual property tax – that makes ownership a farce. And how about a rising against this noxious business of taxing personal property, so that we can truly own nothing except perhaps the clothes we’re wearing and whatever small items we can carry in our hands?

We pay tax on the money we earn before it even reaches our hands. At least twice, for most of us (federal and state taxes). Then we are taxed every time we spend whatever’s left to us. And then we are taxed again – endlessly – for the privilege of “owning” the property we bought with that already twice-taxed money.

People need to get their heads straight. It is not Big Business that is the enemy. No matter how strong-arm its practices may appear to be, they rarely if ever, involve the threat of men in costumes with badges and guns showing up to compel your participation.

Only the government can do that. And for now, it is only government that is inescapable.

* Exceptions include the for-profit business cartels, such as car insurance and (lately) heaf-cayuh “providers” that have secured a “mandate” forcing people to buy their product or service.