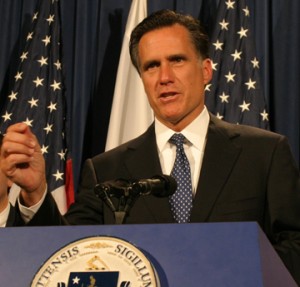 Patriotic immigration reformers remain dumbfounded over Mitt Romney’s refusal to condemn President Obama’s Executive Amnesty, especially after all of his tough enforcement talk during the primaries. But this betrayal of the GOP base should have surprised no one; the Romneys have been doing it for decades.

Think about it: How different is the post-American worldview of George W. or Jeb Bush from that of their internationalist father? Is Senator Jay Rockefeller (NumbersUSA D+) very different from his globalist uncles Nelson and David? Can you imagine any member of the Kennedy clan calling for an immigration moratorium?

You see my point.

The Romney Family’s worldview has been largely shaped by their political patriarch, the late Governor George Romney of Michigan—a man to whom they remain passionately attached, and whose legacy they are quick to defend.

During a recent episode of Mad Men, a fictional aide to New York City Mayor John Lindsay remarks: “Well, tell Jim [that Lindsay’s] not going to Michigan because Romney’s a clown and I don’t want him standing next to him.”

Mitt son Tagg Romney quickly defended his grandfather on Twitter: “George Romney was as good a man I’ve ever known. Inspirational leader, worked for civil rights, promoted freedom. We need more like him.”

(My emphasis). This is an opinion Tagg’s father clearly shares.

“I am a small shadow of the real deal,” Mitt Romney said of his late father. “I grew up idolizing him. I thought everything he said was interesting.”

From the beginning, it was obvious to everyone in the Romney circle that Mitt, despite not being the first-born son, was always George’s designated heir. Romney’s press secretary said that George and Mitt had more of a “partner relationship” than a typical father/son relationship. Even as a teenager, Mitt was a constant presence in the Governor’s office, discussing the nuts and bolts of public policy with his father and his aides. [Privilege, tragedy, and a young leader, By Neil Swidey and Michael Paulson, Boston Globe, June 24, 2007]

It therefore only makes sense to ask: who was George Romney, and how might his worldview have influenced the presumptive GOP nominee on the National Question?

The dedication statue at Brigham Young University’s George Romney Institute of Public Management describes the late governor as “A liberal in his treatment of his fellow man, a conservative with other people’s money, a leader, not a manipulator.”

This description of George Romney is utterly false–except for being “liberal.”

George Romney began his political career as a Beltway lobbyist for both the aluminum and auto industries. In 1939, he relocated to Michigan and quickly moved up the auto industry ladder to become CEO of American Motors.

In 1941, the Romneys bought a home in the then exclusive Palmer Woods section of Detroit. But during the 1940s, Detroit began to unravel as the black population doubled in size. In 1943, a three day race riot left 34 dead, hundreds injured, and millions in property damage before federal troops finally restored order.

In response to the riots, Romney formed the Detroit “Victory Council” to spearhead renewal efforts in the city, all of which failed as more blacks moved into Detroit, and more whites moved out.

In fact, Romney also abandoned Detroit in 1953 and moved to the exclusive suburb of Bloomfield Hills. (The family’s Detroit home was recently demolished).

In 1961, Romney became a delegate to the Michigan Constitutional Convention where he spearheaded a successful effort to incorporate a Civil Rights Commission into the new state constitution, thereby preventing it from ever being dismantled by the legislature.

In my view, George Romney was the original “maverick” Republican who habitually thumbs his nose at his own party and its base (a.k.a. whites), acquiring glowing Main Stream Media coverage as a result.

In 1964, Romney closely collaborated with New York Gov. Nelson Rockefeller to undermine the presidential campaign of Senator Barry Goldwater. In a speech at the GOP Convention in San Francisco, Romney denounced the Goldwater supporters for their “extremism and lily-white Protestant Americanism.”

After Goldwater officially became the nominee, Romney staged a public walkout of the convention over Goldwater’s opposition to the Civil Rights Act—a gesture that helped to burnish the GOP’s image as the “racist party.”

At his side, the entire time was a 17 year-old Mitt Romney.

Given Romney’s dogmatic disregard of racial realities, it is no surprise that he was caught flat-footed by the five day riot that engulfed Detroit in July, 1967—a conflict he surely exacerbated by waiting far too long to request federal troops.

Nevertheless, even after the riots, Romney continued to believe that we could All Just Get Along with more “dialogue” and the right government program.

In September, 1967, Gov. Romney embarked on a well-publicized “ghetto tour” of black neighborhoods across the nation—during which he even met with Chicago radical Saul Alinsky.

In 1968, George Romney made a hapless run for the GOP presidential nomination. He then sought to become Richard Nixon’s running mate at the Republican Convention in Miami. Nixon rebuffed him. In response, Romney refused to release his convention delegates to Nixon.

President Nixon then retaliated by making George Romney Secretary of Housing & Urban Development. “What better revenge than to put Romney into a meaningless department never to be noticed again?” said John Ehrlichman of the appointment.

At HUD, Romney again worked tirelessly against the interests of middle and working class whites, most notably through his “Open Communities” and “Operation Breakthrough” programs, both of which were designed to forcibly integrate blacks into white neighborhoods. “We’ve got to put an end to the idea of moving to suburban areas and living only among people of the same economic and social class” Romney told The New York Times, ignoring the fact that he had done exactly that.

Secretary Romney also tried to force racially integrated housing projects into white ethnic neighborhoods in Chicago and Warren, MI, threatening to withhold federal funds if they didn’t comply. He was utterly indifferent to the fact that Chicago had recently experienced a number of terrifying race riots, and many residents of Warren had only moved there to escape Detroit.

Nixon, at the behest of Chicago Mayor Richard Daley, intervened and ordered Romney to call the integration proposals off.

Mitt Romney is far more cautious in manner than his outspoken father. But this difference in style unfortunately does not translate into a difference in substance. There is every reason to believe that he has little loyalty to the GOP’s base.

Romney won the 2002 Governor’s race in Massachusetts largely because he piggy-backed on one of Ron Unz’s anti-bilingual education initiatives, which carried overwhelmingly as usual. (cf. California governor Peter Wilson’s come-from-behind re-election in 1994, piggy-backing on Prop 187). This took a certain nerve, because the initiative was, as usual, opposed by the entire Massachusetts political Establishment. But the personal experience of the electoral power of the National Question seems to have left little impression on Romney. He clearly does not really care about or even understand the Official English issue—Rick Santorum was easily able to skewer Romney’s unprincipled betrayal of it in this year’s Puerto Rico primary.

True, as Governor of Massachusetts, Mitt Romney made some decisions that did resonate with white voters, such as when he vetoed legislation granting in-state tuition for illegal aliens. But, even then, one never got the sense that Romney was philosophically opposed to illegal immigration—just smart enough to veto the bill after hundreds of irate citizens jammed the State House phone lines.

In fact, soon after vetoing the state DREAM Act, Romney publicly expressed support for the McCain-Kennedy amnesty, and hired illegal aliens to landscape his suburban mansion.

Gov. Romney also strengthened Massachusetts’s 40B law—a policy that originated under George Romney’s Operation Breakthrough. 40B allows real estate developers to bypass local city and town zoning laws to construct developments if they include a designated number of subsidized “low income” units. Wealthy cities and towns can afford to resist 40B proposals, but others cannot.

Under Romney (2003-2007), developers built over 23,000 subsidized housing units in Massachusetts, double the number of the previous governor. However, Romney, like his father, has always chosen to live in very wealthy all-white neighborhoods far from the threat of 40B.

Mitt Romney, again like his father, also remains a strong supporter of affirmative action. As a Senate candidate in 1994, Mitt Romney argued that companies should be required to annually report the number of minority employees and their salaries. But I could find no evidence that Romney has ever made a single minority hire at his own highly lucrative (and highly Mormon) business.

Still, even though Mitt Romney has no loyalty to the GOP base, he is smart enough to know what matters to it. During the 2008 and 2012 Republican primaries, Romney switched gears and employed some very tough enforcement rhetoric.

But now that the nomination is secure, he can take those votes for granted–or so he appears to believe.

Consider some of Romney’s recent moves: He has hired open borders lobbyist Ed Gillespie [Email him]as a senior campaign advisor, assembled a “Juntos Con Romney” Hispanic Leadership Team. And in Thursday’s speech before a group of Latino officials, he basically promised to deliver an immigration amnesty. (He also promised to increase skilled immigration, although why he thought this aspect of the Chamber of Commerce wish-list would appeal to Hispanics is a mystery).

If Mitt Romney is elected President in November, it will only be because whites show up in great numbers to support him–and because they have not yet figured out that he has already turned his back on them.

Matthew Richer (email him) is a writer living in Massachusetts. He is the former American Editor of Right NOW magazine.