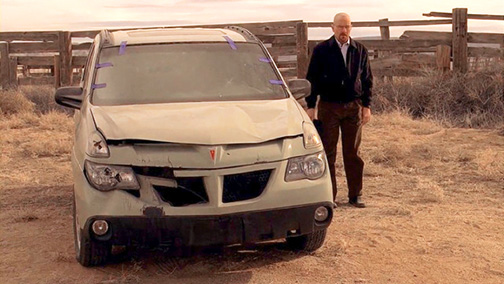 Well, it wasn’t a bad idea. 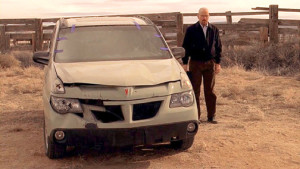 Then again, neither was the Titanic.

The great ship ended up at the bottom of the ocean as the result of a lethal combination of bad judgment, poor timing and spectacular design defects.

But at least the Titanic was beautiful, sleek and fast.

Pontiac’s Aztek was none of those things. It was awkward, bizarre … .

When it sank, people cheered.

In retrospect, though, the Aztek wasn’t all that awful . . . at least, functionally speaking. 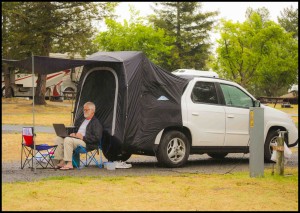 Like the much-loved VW Westphalia camper bus of the 1970s, the Aztek was the perfect rig for self-contained adventure trips. It didn’t have a pop-up camper top – but it did have an optionally available tent extension for the rear (and two-piece, swing up and swing down) tailgate. An air mattress fit easily with the second row of seats removed. Or, drop the lower section of the tailgate  and cart home a stack of 4×8 plywood sheets.

On the roof, there were configurable racks for securing everything from kayaks to bicycles (you could also “park” one inside the Aztek).

The center console was removable – and doubled as a portable beverage cooler. There were secondary controls for the 10 speaker Pioneer stereo mounted in the rear – along with multiple molded- in cupholders and accessory power points – just the ticket for parking lot parties. 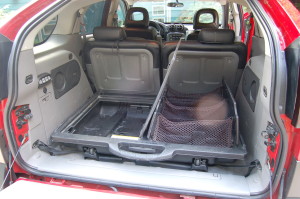 The deck was low, the roof tall. Lots of space for people and their stuff.

In 2003, Pontiac fitted the Aztek with one of the very first factory-installed tire pressure monitoring systems. These have only recently become standard equipment in new cars – almost ten years after the last new Aztek shuffled off the stage.

You could even order a fighter jet-like Heads Up Display (HUD), which projected your speed and other information holographically in the driver’s line of sight, eliminating the need to glance down at the main gauge cluster. 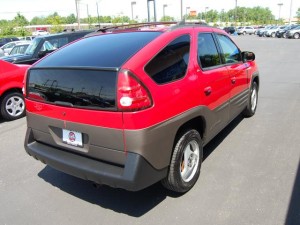 All-wheel-drive was available, too.

That plus a bit more ground clearance than the typical car had also meant you could drive the Aztek places most cars couldn’t go – like down to the creek for a picnic.

On paper, it sounded good.

Many of the above described features are now commonplace. But the Aztek was the first to package them together in a single vehicle. Pontiac deserves credit for being forward thinking in this regard – and perhaps one day automotive historians will take note

It’s not an exaggeration to state that the Aztek, misshapen as it may have been, pioneered the crossover SUV concept – today’s very much “in” thing. Back in the late ’90s, there were SUVs – mostly based on trucks – and there were cars.

Not much in between.

Aztek tried to bridge that gap – and might have pulled it off.

If someone had thought to put a paper bag over its head… .

Because aesthetically, it was an absolute disaster. Borat in a thong, screaming Kazakh gibberish and running through the halls of the Vatican. It seemed to have been created deliberately weird, Gomez Addams style.

Nope. They meant to do it.

An article in Business Week that appeared shortly after the Aztek’s 2001 launch quoted a GM insider as admitting that the Aztek’s hideous snout was deliberately styled to be “aggressive for the sake of being aggressive.”

But the problem wasn’t that the Aztek looked too “aggressive.” Americans – especially in the early 2000s – were into aggressive. Hummer H1 Alphas. Vipers. When gas was cheap and your house was worth 20 percent more every year, hell yes. The more aggressive – the better!

And it was worse than merely ugly. Lots of not-so-good-looking cars have come and gone. Some were even popular. None caused the rumpus raised by the Aztek.

The Aztek went beyond ugly. It was an affront. The automotive equivalent of Ozzy Osbourne biting off the head of a bat and spitting it at the audience. 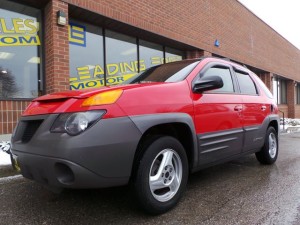 No one wanted the bat’s head in their lap.

I was present at the public unveiling of the Aztek, at the 2000 Detroit Auto Show. To this day, I’ve not experienced anything quite like it.

A misshapen dumpster-thing appeared before our eyes. The mauled face of a Gila Monster lizard, crushed by a passing semi, wrapped up with a perimeter armor plate of corrugated plastic body cladding – offset by lurid day-glo colors. A demented exposition of psychedelic geometry, angles abounding. A concatenation of jumbled forms and belligerent, intentional tastelessness. 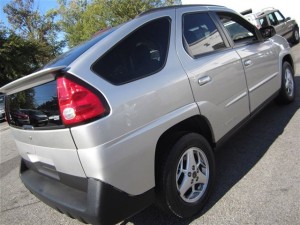 It made one’s teeth hurt just to look at it.

One of my journalist colleagues captured the reaction of the appalled automotive press thusly: “This car could not have been more instantly hated if it had a swastika tattoo on its forehead.”

The shock was palpable.

Then came the laughs.

They reverberate to this very day – almost a decade after the last Aztek schlepped ignominiously off the line after an embarrassingly abbreviated production run of four years.

“We wanted to do a bold, in-your-face vehicle that wasn’t for everybody,” said Chief Designer Peters.

Well, he got what he wanted.

As it turned out, the Aztek was almost for nobody. 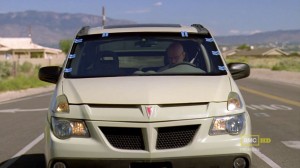 Excepting perhaps Walter White on Breaking Bad, of course. Where an Aztek served as a stage prop for failure. Once Walter became Heisenberg, bye-bye Aztek. 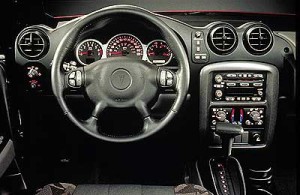 But to be fair to the Aztek, it wasn’t just its off-putting looks – or the endless jokes – that crippled it from the get-go.

The thing was also preposterously pricey.

In 2001, the base MSRP was $21,445. Elaborated in today’s inflation-adjusted dollars, that would be almost $29,000. With a handful of options, the asking price could easily sail into the mid-$30k range. Why was this a problem? The Aztek’s target demographic was Generation X. People who – in the late ’90s/early 2000s – were in their 20s and early 30s, not long out of college, probably still single, with slacker-type jobs (remember those?) that didn’t generate the coin one would need to fund a $30k vehicle, no matter what it looked like.

Even if they liked it very much. 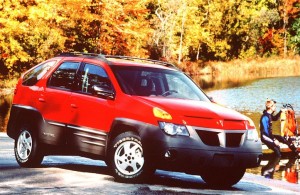 And the people who could afford a $30k vehicle? The over 40s, with families and responsible jobs? Most of them would rather have been photographed in full leather gimp suit with a goat in flagrante than roll up to the office parking lot in an Aztek.

For the too-old it was just too much. And for the young, it cost too much.

And that left almost no one else.

As great a misfire as the poor Pontiac’s eyesore aesthetics may have been, the stupefyingly inept marketing (and pricing) is probably just as responsible for GM’s greatest fiasco since the”unsafe at any speed Corvair.”

Keep in mind: Earlier Ugly Bettys like the AMC Pacer and Gremlin actually sold not badly – because they were cheap and that made them kind of fun. Think of the times you bought some little item on a whim, not because you really needed it, but because it made you smile. 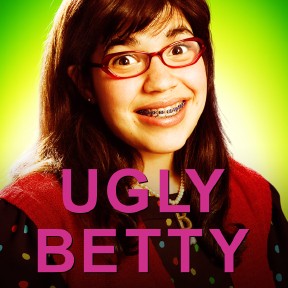 GM could have been sold the Aztek for a lot less – and while that might not have made it a Boratian Great Success, it might have kept it from becoming the ultimate automotive belly flop.

The mechanical things were straight-up Pontiac Montana minivan – already amortized. The exterior panels were just panels – and many of them made of plastic. The V-6/4-speed automatic powertrain was pure GM boilerplate, shared with a dozen other same-era GM models.

Nothing about the Aztek  demanded a $30k-to-start MSRP. 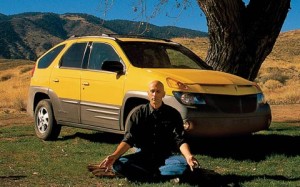 And Pontiac as much as Aztek paid the price. The division never recovered – even after the introduction of great-looking/great-performing cars like the Solstice and G8. Four years later, in 2009, they turned out the lights for good.

It’s said most disasters are not the result of one thing gone wrong but rather, a confluence of things gone wrong that, together, make disaster inevitable.

A fitting epitaph for the Aztek – and Pontiac.

Getting into the Old Car Hobby