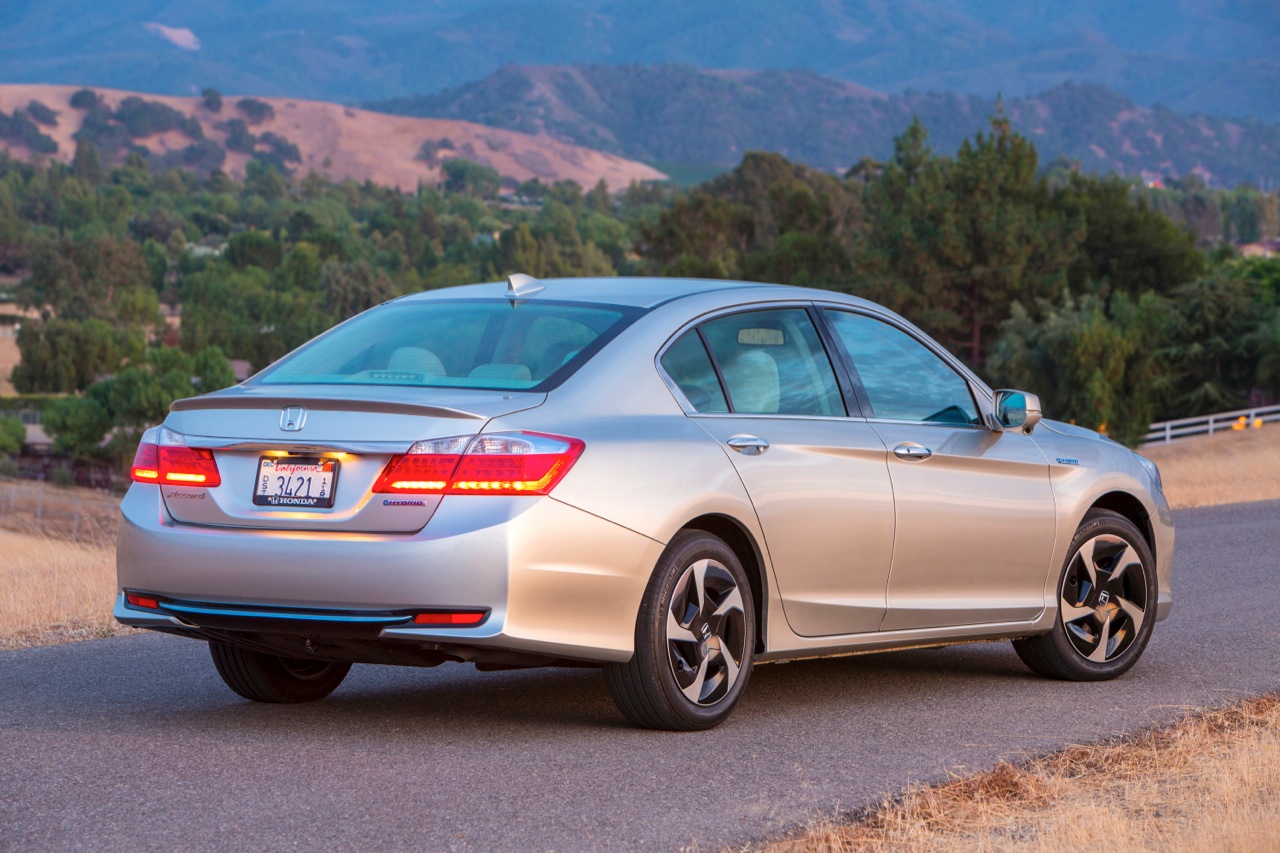 What do a Porsche 911 and the hybrid Honda Accord have in common? 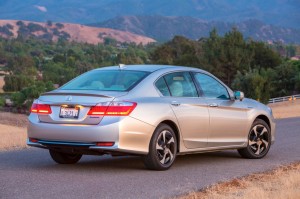 Oh, sure – there’s more to it than just that. But you know and I know that there are people who buy 911s not because a 911 can do a 12 second quarter mile and run up to 180 MPH on top but also because driving around in a 911 at 45 MPH makes them look (and feel) good. Which is a perfectly valid reason to buy any car.

Which brings us to the new Accord hybrid.

The thing gets fantastic gas mileage: 50 city, 45 highway. Nothing that’s not a Prius (or a motorcycle) can touch this. 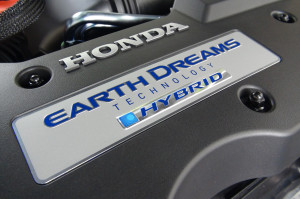 But some people don’t want to be seen in a Prius – the Mrs. Doubtfire of hybrids.

They want something more Angelia Jolie.

Ok, that might be a little bit of a stretch.

But the Accord hybrid doesn’t wear granny panties – and you won’t feel like Mrs. Doubtfire when you’re behind the wheel. It’s also more engaging to drive than the Toyota Camry hybrid (reviewed here) and it’s both much quicker and more economical to drive than the good-looking but slow-moving Ford Fusion hybrid.

Which, of course, explains why it’s more expensive to buy than either of them. 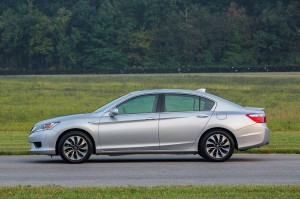 It also comes very close to delivering gas mileage comparable to that of the clunky-looking (and clunky driving) Prius hybrid – but the Honda hybrid is neither clunky looking nor clunky driving.

It’s also the highest-priced hybrid sedan in this class. 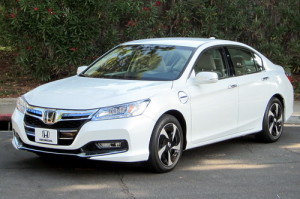 The ’14 Accord hybrid is new from the wheels up. 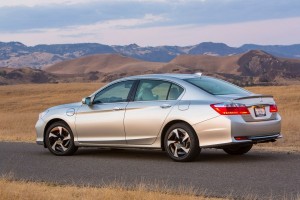 It almost doubles the city mileage of the previous (first attempt) Honda Accord hybrid – which was quicker than other hybrids in this class, but which never did better than 24 city, 32 highway – and which, because of that, never made much headway against the Toyota Camry hybrid.

Much less the Toyota Prius hybrid. 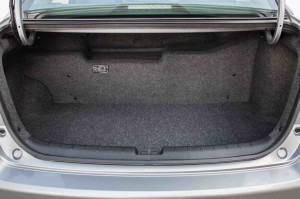 With hybrids, it’s not just what’s under the hood that matters.

It’s about what’s under the trunk floor, too  . . . where the battery pack is. And also about the electric motor – which in the case of the Accord hybrid is plural. There are two of them – one to provide the usual mechanical assist for accelerating the vehicle and another tasked entirely with keeping the battery pack charged up. 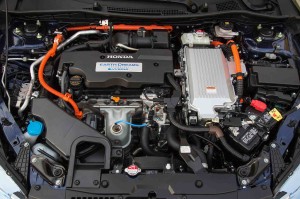 In other hybrids, a single electric motor typically does double duty – helping to accelerate the car and also recharging the battery as you drive.

The problem with that is there’s only so much work one motor can do.

By adding a separate motor whose only job is to feed juice to the battery pack, the Accord hybrid’s battery pack gets recharged faster, which makes it feasible to operate the car in “EV” – electric vehicle – mode for longer. And when the vehicle is operating in EV mode, the gas engine isn’t operating at all – and thus, you’re burning no gas at all.

It is possible to drive the Accord hybrid for several miles – and at speeds as high as 70 MPH – on electricity-only. And even when the Accord’s gas engine does kick back on, you’ll discover it frequently kicks off again sooner – and more often – as you drive. 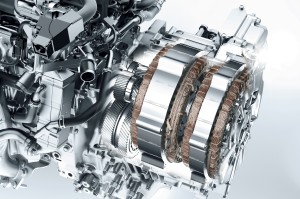 This is how the Accord hybrid manages class-best mileage (50 city, 45 highway) and class-best acceleration (0-60 in 7.5 seconds).

And the Ford Fusion hybrid is much slower than both – 8.5 seconds to 60. It also only delivers 47 MPG (both city and highway). 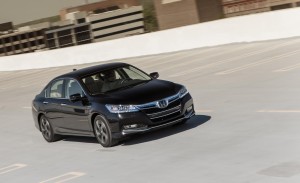 It takes a Prius more than 10 seconds to heave itself to 60 MPH – the price you pay for 50-something MPG.

Compared with this “performance,” the Accord hybrid is a muscle car.

But muscle cars are – usually – thirsty.

The hybrid Accord manages to be quick – and economical.

In fact, it’s capable of being more economical than the EPA’s numbers indicate. I’m not the only car test jockey who has wrangled mid-50s out of the thing in suburban stop-and-go driving. 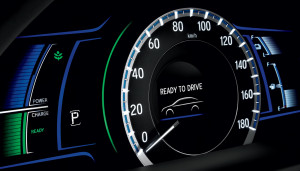 So, when you need speed, it’s there. But you’re still getting the MPGs, too.

I’d call that a win.

To be fair to Toyota, the Camry hybrid will just a about keep up with the Accord hybrid in a straight-up drag race  – should you be so inclined – but its mileage is nowhere near as good. I averaged 33.7 MPG during a weeklong test drive (see here) of the Camry hybrid, mixed city and highway driving – vs. 41.4 in the Accord. And that included some extra-curricular triple digit forays into the land of the extremely illegal. Mash the pedal, don’t treat it nice  .  . . do all you can to waste as much gas as possible – and you’ll still get better mileage in this thing than in any current non-hybrid economy car. Drive it moderately – take advantage of the car’s technology – and you’ll enjoy the kind of mileage most people only see on two wheels. 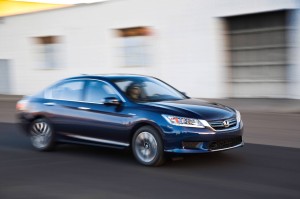 And when the road’s no longer straight, forget about it.

The Accord hybrid’s cornering prowess – its lack of body roll, the absence of early onset tire squeal – and early-intervention TCS – is to the Toyota what a Starbuck’s Bold is to a cup of Maxwell House. No slam meant. The Camry is a comfortable cruiser; the relaxed fit jeans of hybrids. But that’s not for everyone.

The Accord is targeted at a younger demographic:

Gen Xers – who aren’t 26 anymore – but who haven’t yet got their AARP cards yet, either. Who drove Mustang LX 5.0s back in high school, maybe a Saab 900 after college. They care about gas mileage – and maybe about saving the planet, too. But they also care about apexes – or at least know what that “apex” means. The people who designed the Accord know what it means. Which is why even the base trim the Accord hybrid comes standard with 17 inch wheels vs. the Camry’s more easygoing 16s (17s are optional). The Honda’s steering is more sensitive to minor inputs – and the car tracks exactly in line with those inputs. These are things an enthusiastic driver will notice right away – while a Camry driver would probably never miss them. 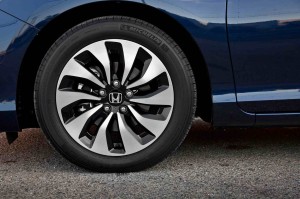 The Accord has always been a more enthusiastic car than its Camry rival. They have been – for years – yin and yang.

The market is  overflowing with cars that are so close to their competitors in looks and driving character that picking one over another is not unlike choosing which of three brands of chocolate ice cream to buy.

Accord vs. Camry is easy. Like chocolate vs. vanilla. 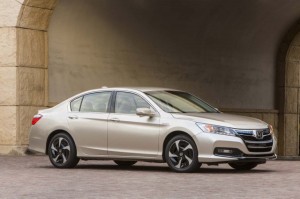 Here, too, the differences are clear.

Camry – the current Camry (a new model’s on deck for 2015) – looks like your mom’s car. The Accord looks more like a MLF’s car. It is wider – and sits lower – than the Camry (72.8 inches and 57.5 inches, respectively, vs. 71.7 inches and 57.9 inches for the Toyota). It’s also about three inches longer overall (192.2 inches vs. 189.2 for the Camry) and that, along with the extra width and lower stance, gives the Honda a more energetic, ready-to-roll posture than the let’s-go-to-the-mall stance of the more conservatively style Camry. 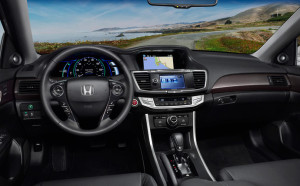 It’s a similar story inside. The Accord’s got more going on. It looks edgier, hipper. More “techno.”  Bright – and large – stacked LCD displays in the center stack. Big speedo flanked by hybrid-specific secondary bar-graph LCD readouts for battery charge, energy consumption and so on. As you drive – and depending on how you drive – the main cluster’s halo shifts from green (best economy) to a deep blue (pedal to the metal). Tap “info” (button just above the gear shifter on the center console) and you can monitor your consumption and other parameters in real time, which serves as a tutorial to help you make the most of the Accord’s hybrid drivetrain.

There’s lots of room, too. 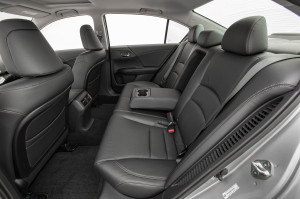 The trunk is truncated – as it is in all hybrid sedans. Just 12.7 cubic feet – vs. 15.8 in the regular (non-hybrid) Accord. The battery pack has to go someplace. And that’s why your stuff may have to fit somewhere else. 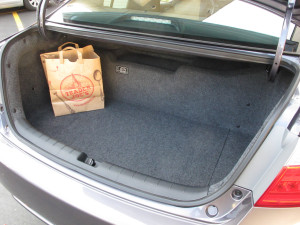 This lack of cargo space is, incidentally, one of the reason why the Prius is popular. The tall roof/hatchback layout allows for generous cargo capacity – 21.6 cubic feet behind the second row and 39.6 cubes if you fold the second row down.

But of course, practicality isn’t everything.

As is true of the other hybrids in this class, the hybrid Accord comes with many bells and whistles standard – on the theory that (again) practicality isn’t everything. Hence, you start a notch up – EX trim vs. LX trim for the non-hybrid Accord. Which means amenities such as dual-zone climate control, leather trim, LCD monitor in the center stack and power pretty much everything are already standard. 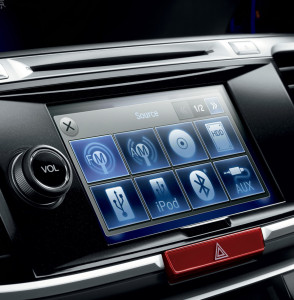 Some of the above features – adaptive cruise, for one – are not offered in the Camry hybrid. Ditto the Forward Collision Warning system (standard in EX-L trims). The Accord’s mouse-type input (with the Nav system) is also more techno than what you’ll find in the Camry.

Here again, a clear difference in feel, function – and look – between these two.

The one that’s best for you, is of course up to you.

Almost a week into my test drive, the Accord hybrid still has a half-full tank – and an indicated range of 351 miles.

Some of the new cars I test drive can’t go 351 miles on a full tank.

This thing can go almost 800 miles on a full tank.

If only Honda sold it in a less adorned – and less expensive – package. 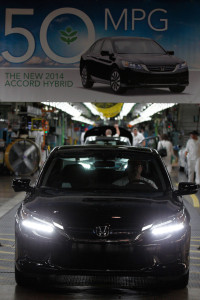 The math still works – eventually. But with a base price approaching $30,000 it’s harder to make a purely economic case for this hybrid. Which isn’t the case Honda’s making, of course. The hybrid Accord is a hybrid plus.

Plus performance, plus amenities. The things you don’t get in a Prius – or a Camry hybrid.

That’s what makes it stand apart from those hybrids.

Why not look good – and feel good – while saving gas?

Still, imagine if Honda offered this brilliant hybrid ensemble in an LX – rather than EX – trimmed Accord. Without the EX’s leather trim, 17 inch wheel/tire package, Lane Departure Warning system, keyless ignition . . .  . It would probably sticker for around $27k – and get even better mileage because it would be lighter and because 16 inch wheels (standard on the LX base trim Accord) impart less rolling resistance. (The Camy hybrid’s mileage drops by about 3 MPG when it’s fitted with its optionally available 17 inch wheel package.) 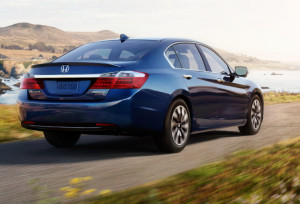 Here’s a hybrid for the person who thought they’d never be caught dead in one.