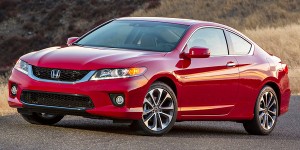 Buyers who in past years would probably have never considered a Kia or Hyundai – much less a Ford or Chevy – over a car as blue chip as the Honda Accord now frequently do consider it. Toyota’s got the same problem as far as the Camry. People are starting to consider their options.

But Honda still has a trump card to play – the Accord coupe.

Because Accord competitors like the Kia Optima, Hyundai Sonata, Ford Fusion, Chevy Malibu, VW Passat and even the Toyota Camry (now that the Solara is gone) are available only with four doors. Not everyone needs or wants the extra pair of doors. But they do still want viable back seats – which the mid-sized Accord coupe has but which other (usually smaller) sporty two-door models do not. Even the roughly same-size Hyundai Genesis coupe has only 30.3 inches of rear seat legroom vs. 33.7 for the Accord coupe.

The only direct threat is – well, was – the coupe version of Nissan’s Altima. It’s about the same size overall and like the Accord coupe, it has a viable back seat. But, it no longer has a V-6 engine – or even a manual transmission, for that matter. Nissan has thrown in the towel … the CAFE towel. It has apparently decided that fuel economy uber alles is the only thing that matters. Which is true – as far as the government is concerned. So a four cylinder/CVT Altima coupe is all that’s being offered. Whether Nissan’s customers will like it is something else.

That leaves the Accord coupe alone on the field. It’s the only mid-sized FWD coupe priced in the mid-high $20ks with decent back seats – and an available V-6 that’s also available with a manual transmission with either of its to engines. 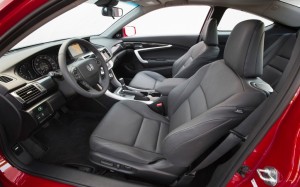 Primary competition for the FWD Accord coupe is the also-FWD Nissan Altima coupe, which starts at $24,230.

Bucking the trend toward ever-bigger (and ever beefier) Honda has tightened up the dimensions of the 2013 Accord. It is almost two inches shorter overall, but with a slightly widened front and rear track. Though the styling and engineering changes are subtle, the 2013 looks (and feels) significantly sportier than the 2012. Same goes for the interior, which features a new gauge cluster with a larger, centrally mounted speedometer flanked by secondary instruments. 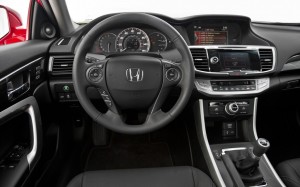 The base 2.4 liter now gets fed fuel via direct injection – with the result being a best-case 36 MPG on the highway, about 4 MPG better than last year’s four cylinder Accord. The V-6’s power upticks slightly to 278 hp (from 271 hp previously) as does its gas mileage, which stands at 21 city, 34 highway vs.19/29 last year.

Also new is HondaLink connectivity, which integrates your iPhone/Android apps with the car’s infotainment systems.

Four now performs – with either transmission. 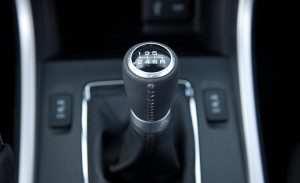 A work of industrial art.

Manual transmission clutch travel is minimal. Engagement can be a little abrupt – until you get used to it.

Manual gear selector’s action could be tightened up for more mechanically engaging feel.

Major MPG drop if you choose the manual transmission with the optional V-6. 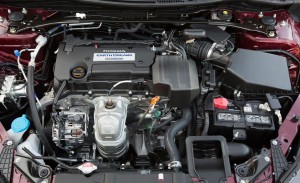 The Accord still offers what is quickly becoming hard to find in this segment: Your choice of either a four or a six and either of them with a manual or automatic transmission.

The base engine is an updated version of the 2.4 liter four used previously. It features direct injection, which is responsible for a solid uptick in fuel efficiency (27 city, 36 highway) with the added bennie of an uptick in hp (185) relative to last year’s base four (177). If you select the optional Sport package, which includes a lower-restriction exhaust system, hp notches up to 189.

Best news of all: The four cylinder-powered 2013 Accord is almost two seconds quicker to 60 – about 7.4-7.3 seconds – with either the manual or the CVT – than last year’s four cylinder/automatic Accord (which took over nine seconds to get to 60). 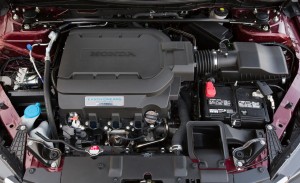 Similar upgrades have been conferred upon the optional 3.5 liter V-6, which now produces 278 hp (vs. 271 last year) and delivers much better MPGs: 21 city and 34 highway vs. 20 city, 30 highway last year. Well, with one catch. To get the best-case numbers, you’ve got to go with the six-speed automatic (it’s a conventional automatic, not a CVT) that’s optional with the V-6. If you go with the six-speed manual, the numbers drop to 18 city, 28 highway.

But, your compensation is quickness. With the six-speed manual, the Accord can scoot to 60 in just under 6 seconds flat. The automatic-equipped V-6 is almost that quick, too. 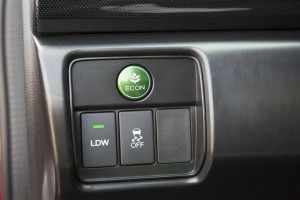 But wait, there’s more: The pitiable ’13 Altima coupe doesn’t even beat the Accord at the pump: 23 city, 32 highway. That’s 4 MPG worse in the city (and on the highway) than the four-cylinder/CVT Accord coupe.

Both Accord engines can be driver-optimized for maximum fuel economy by depressing the little green “Eco” button to the left of the steering wheel. This works like the similar systems in other cars. Press the button, and throttle response is muted a little – and if the car is automatic-equipped, it’ll try to get into top gear sooner (and stay there longer). Is it noticeable? It wasn’t to me. Probably, just keeping your foot out of it would work about as well. 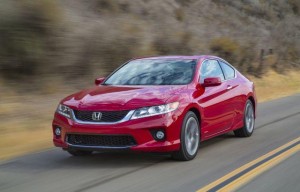 Drive the 2012 and 2013 Accord back to back and you will definitely feel a difference – a lean toward the sportier side of the aisle.

The Accord has always had a firmer ride – relative to rivals like the stay-pufft Camry – and that continues to be the case. But the ’13 is also noticeably more sure-footed in the curves, which may be a function of the slightly wider front and rear track (62.4 inches/62.3 inches, respectively, for 2013 vs. 62.2 and 62.2 inches last year) and the slightly decreased wheelbase (107.3 inches now vs. 107.9 previously).

The tighter gear spacing of the new six-speed manual adds to the sporty ambiance, with the extra gear being a win-win for both fuel efficiency and the fun factor of driving this car. I only have two small complaints, hinted at earlier: First, the clutch take-up is a little abrupt. It is fairly easy to stall this car. The clutch is either in . . . or out. Modulating it for a smooth transition will probably take a day or two of getting used to it. Don’t be scared off during your initial test drive. Next, the shifter action could be tightened up. It’s not that it’s sloppy or vague. It’s just that it could be more . . .  mechanical. This is something the aftermarket surely will address. 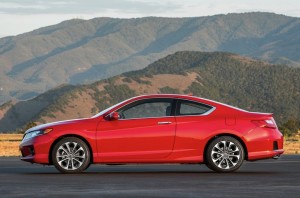 Steering is electrically assisted, and though it’s arguably a bit overboosted, it’s very precise at normal driving speeds.  At well above normal driving speeds, it sometimes has trouble keeping up with your intended line – but this isn’t supposed to be a BMW M3, after all.

The V-6, on the other hand, is operatic. You will probably keep it in fourth rather than fifth or sixth, just to keep the revs up – and hear the magnificent sounds of this VTEC jewel coming on its cams. Seriously, this is one of the sweetest sixxes on the market – at any price point. Try it. You’ll see. 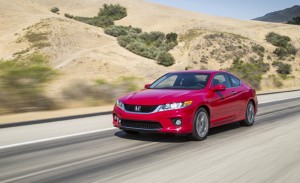 Though the Accord – being FWD and more of a multi-tasker (luxury/comfort and sportiness) – won’t out-autocross RWD sport coupes like the Hyundai Genesis or the new Scion/Subaru BRZ/FR-S, it is fun enough to be enjoyable as an everyday car with all the advantages of the FWD layout over the RWD layout – as well as the advantages of a passenger-viable back seat.

As with the changes to the chassis and suspension, the cosmetic changes are subtle, but they change the personality of the car in a very big way. Park the ’13 next to the ’12 and the tightened-up proportions are immediately apparent. The new car is wider and lower – and so, sleeker-looking. The big metal bar that used to sit on top of the grille is gone, replaced by a thinner chrome “u” lower surround. The lower grille/air intake, meanwhile, is much larger – and wider – and the emplacements for the driving lights (also bigger) are accented with flat black surrounds. The hood now spreads out the entire width of the car – vs. the old design, which tapered toward the grille. It looks much faster, especially when viewed from the front. 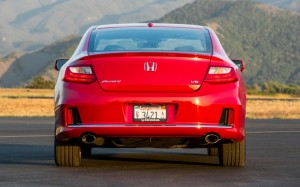 The back end is also less soccer mommish than before, for similar reasons. Tail-lights are (again) wide and low – rather than tall and short. The lower rear fascia has cut outs for airflow, as well as larger cutouts for the also larger (elliptical) dual exhaust tips – with a chrome trim strip tying it all together.

It’s still very much an Accord – just a much more athletic-looking Accord.

Inside, there’s a revised cluster with a large, centrally mounted speedo and subsidiary gauges off to either side. The numbers are also – you guess it – larger – with red hashmarks adding to the sport-minded ambiance. Carrying on the wider/lower theme, even the air vents are – yep – wider and lower. 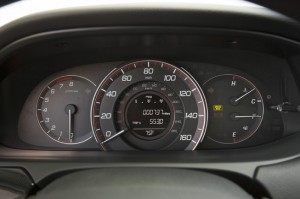 One of the things that I – as a “big and tall” guy – really like about the Accord is the amazing extent of the driver’s seat adjustment range. Higher/lower, less or more upright . . . the combinations seem almost infinite. Few modern coupes are genuinely accommodating for the big and tall. The Accord is one of these. If it you don’t fit comfortably, you’re probably an NBA forward. No joke. 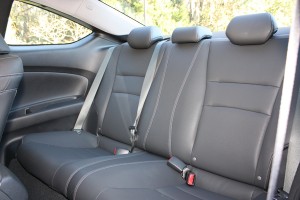 Ditto the back seats – which likewise are no joke. As they are in every other mid-sized and compact RWD performance coupe in this class – and even in full-size coupes like the Dodge Challenger, which is a landshark compared with the Accord: almost eight inches longer and nearly 400 pounds heavier. Yet it only has 32.6 inches of backseat legroom vs. 33.7 for the Accord coupe. Rear headroom in both cars is almost exactly the same – 37.2 for the Accord vs. 37.4 for the Challenger – which is surprising given the blockier proportions of the full-sized Mopar muscle car.

But a better cross-reference is to compare the Accord’s interior real estate stats with a roughly same-size RWD sport coupe like the Hyundai Genesis. With just 30.3 inches of rearseat legroom and only 34.6 inches of backseat headroom, the back seats in the Hyundai are more for groceries and gym bags than people. . 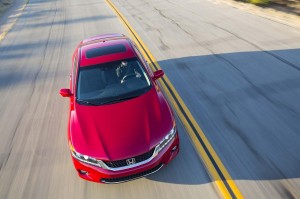 Even the gelded Nissan Altima coupe comes in as less practical than the Accord coupe. Though it’s got marginally more backseat legroom – 34.4 inches – it also has much less headroom – 35.6 inches. I have no clue what they are smoking over at Nissan corporate.

Someone really ought to open up a window.

This is not a fussy car. It has a lot of electronics – as is true of all current cars – but they aren’t overdone. Or over-nannyish. The touchscreen GPS and mini-mouse input aren’t inscrutable – or awkward to use. You can turn off the traction control with a single push of a single button – as opposed to the mutli-step process in some other cars. “Off” is off, too. 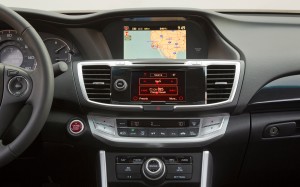 I’m not a huge fan of the Lane Departure Warning system – which you don’t have to buy, thank god. Being old-fashioned, I think people should learn to, you know, stay in their lane – and stay focused on their driving – without depending on a computer nanny to nudge them when they wander into the other lane. Which brings me to the other reason I do not like Lane Departure. Sometimes, you want to depart from your lane – as when executing a pass. But if there’s a broken yellow line, the system will beep at you – which is both distracting and annoying. Throw it in the woods!

The seat heaters are also excellent. Some just warm. 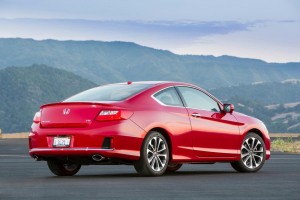 In the past, the Accord sedan was the go-to car in its segment (along with the Toyota Camry sedan). That may no longer be true – for the sedan.

But the coupe is still in a class by itself.