Here’s an example of the importance of cross-shopping: 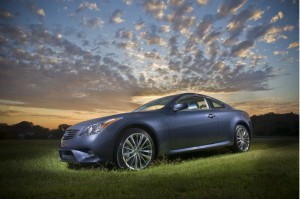 Of course, power/performance – and even price – aren’t the sole considerations when considering which luxury sport coupe to buy.

But the G comes out of the gate looking pretty strong. 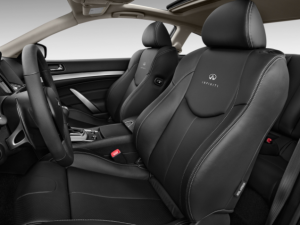 The G37 is a mid-sized, two-plus-two luxury sport coupe/retractable hardtop convertible based on the G37 sedan. It is available with either rear-drive or AWD. A standard trim RWD hardtop coupe lists for $37,800. An AWD-equipped G37x starts at $40,900.

The retractable hardtop model starts at $46,650.

Superb – and superbly powerful – standard V-6 destroys the standard fours (and some sixes) in competitor models. 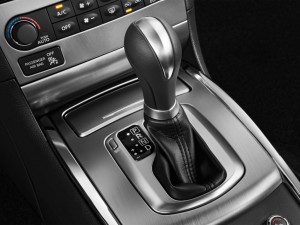 Lower profile lets you get away with using the thing.

Headroom can be tight for taller drivers in coupe with optional sunroof (included with Premium package).

Manual transmission (six speed) only offered in higher-priced Sport trim ($44,200) and not with AWD.

Not as recognizably high-end as a Mercedes C coupe, BMW 3 or Audi A5.

The G coupe comes standard with a powerhouse 3.7 liter V-6 that produces 330 hp – massively outgunning the standard fours in the Mercedes C (201 hp), Audi A5 (211 hp) and BMW 3 (240 hp). The gaping gulf relative to the comparably priced Benz and Audi is almost unbelievable – more than 110 hp.

So also the performance gulf. 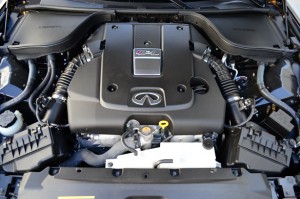 The G gets to 60 in about 5.5-5.6 seconds with either transmission (RWD and IPL models being just slightly quicker). The Benz C250 does the run almost two full seconds slower – 7.4 seconds, or Toyota Camry territory. Four cylinder Camry territory.The Lexus IS250 is even slower – slower, in fact, than some current $17k economy compacts.

The standard transmission in the G37 is a seven-speed automatic with manual mode (controlled by real magnesium paddle shifters) and rev-matching downshifts. A six-speed manual is available, too – but only in Sport versions and not with AWD.

Gas mileage for the RWD coupe with the seven-speed automatic is 19 city, 27 highway. With AWD, this drops slightly to 18 city, 25 highway.

Some dissection: BMW (and Mercedes and Audi) tout the mileage of their four-cylinder engines. The BMW 3’s 2.0 liter turbo four, as an example, delivers 24 city, 36 highway – which is excellent. Especially the highway number, which is about 10 MPG better than the G’s.

But at this price point, which is of more relevance to buyers? Gas mileage? Or the prestige (and performance) of a 330 V-6 vs. a 200-something hp four? The truth is that BMW and the others have turned on to fours in order to satisfy the government more so than buyers. Looming Corporate Average Fuel Economy (CAFE) standards, which will require each car manufacturer’s entire model lineup to average 35.5 MPG by model year 2016 or eat (or pass on to consumers) massive “gas guzzler” fines.

Thus, turbo fours. They deliver almost V-6 performance and nearly economy car gas mileage. The G’s V-6 – and other V-6 (and V-8) performance car engines – are either going to be phased out. Or they are going get a lot more expensive.

Enjoy it while you still can.

The G is a smooth operator – and I don’t just mean the ride (which is that, too). This is a car for swift – but under-the-radar – travel. It is one of the quickest luxury-sport cars you can buy for less than $40k but it doesn’t have the cop-bait flash of a BMW (an established offender – in the eyes of many ossifers, at least) or a Benz C-coupe

Get one in gun metal gray like my test car – or some other dark color – and you’ve got the highway-hauling equivalent of an F-117 stealth fighter. Because avoiding notice is the first step in avoiding the consequences of being noticed. And in a hustler like the G, that is key. Because it moves out – and thus, you’ll want to make use of that ability, often. Without needing, as Warren Zevon once put it, lawyers guns and money. 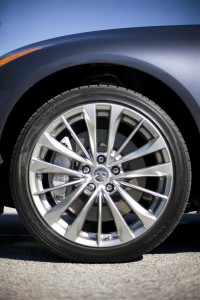 An interesting – and appealing – aspect of the G’s personality is that the AWD-equipped versions behave very much like RWD performance cars – even to the extent of allowing the back tires to spin a little bit when launching hard. And because of the huge horsepower advantage relative to competitors like the C250 and A5 (and even the BMW 3) not only can you power into corners, you can power out of them.

And if you want to, power slide through them.

The optional AWD system also gives you a two-fer: It is an enhancement on dry roads when running fast – and also makes the car usable in winter, on snow-covered roads. Be advised, however, to have a spare set of all-season tires on hand for winter driving. The high-performance “summer” tires aren’t called that for no reason. AWD or not, if you head out with those tires when it’s snowing, you’re not likely to get very far. And may end up someplace you don’t want to be.

This car doesn’t call excessive attention to itself. A plus – or a minus – depending on what you’re after. If you’re mostly interested in image – in being seen – then a Benz C coupe or Audi A5 will probably suit you better.

The G has fluid styling and nice proportions, but it’s not a flashy car.  It is the kind of car that a serious driver will appreciate – because it lets you get away with things that would be harder to get away with in something with a known rep or the visual cues that seem to draw the attention of cops. 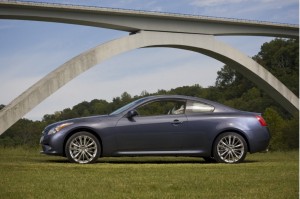 Other stuff: The available retractable hardtop gives you the option of topless motoring on nice days but the physical security of a hard top on not-so-nice days (and in not-so-nice neighborhoods). The potential downside is down-the-road costs associated with the complex folding top mechanism.

One issue with the G coupe is headroom. If you’re taller (over six feet 1 or so) you may have to cant yourself to the right a bit – or scrunch down in the seat – to avoid having your head rubbing up against the ceiling. You can make things better by not ordering the optional sunroof – which cuts the available headroom down by about an inch. Unfortunately, if you skip the sunroof, you’ll have to skip the power tilt-telescoping wheel and the Bose stereo upgrade – which are bundled together with the sunroof as part of the Premium package.

Other reviewers have commented about Infiniti’s package structuring – having to buy a bunch of things to get the one thing you want, or having to buy the preceding package to get the next package. It’d be nice if you could buy at least some of these items a la carte. Or skip a few items (like the sunroof) the same way. I, for instance, could not own this car with the sunroof because of my height (6ft 3) and the headroom issue. But I’d probably want to buy the Bose 11-speaker stereo.

Trunk space – just 7.4 cubes– is minimal. But you do have those back seats, so the G can carry more stuff than a two-seater like its cousin the Nissan 370-Z 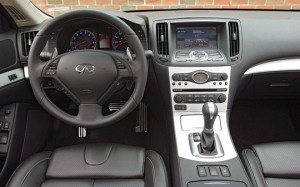 There’s another important thing to know about the G – about all current Infinitis: They are among the least (no, they are the least) nannyish new vehicles you can buy. For example, they do not have a “belt-minder” buzzer. If you elect not to buckle-up, the car doesn’t hassle you. A red “seat belt” icon illuminates on the dash – and that’s all. I’m not 100 percent sure, but I think Infiniti is the last holdout – the only major automaker that doesn’t include the belt-buzzer and which thus holds to the heresy that buckling up (or not) is really your business, not theirs.

No DRLs, either (Audi has ’em, so do more and more of the others). And while there are a number of “safety” features, including the usual suspects – traction and stability control, available adaptive cruise control, etc. – none of them are obstreperously intrusive. The traction/stability control system, for example, has a higher-than-typical threshold before it cuts in – and if you want to cut it off, you can do so merely by pushing the Trac button. Once. Not twice. Not hold it for awhile to partially deactivate.

As with the G’s screw-CAFE 330 hp V-6, the minimalist emphasis on “safety” is a testament to Infiniti’s driver-minded attitude. You know, the way BMW used to be. 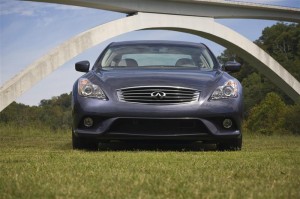 Value probably isn’t the number-one consideration for people shopping lux-sport sedans, but there’s no reason not to be happy about the G’s modest (for a car like this) price tag, in view of all you get – and don’t get in other cars that cost more.

No One Seems to Be Saying it…