Who doesn’t like the original Mini? It’s cute, but not girly. Sporty – but not overbearingly macho. A six foot man can drive it – and not look (or feel) silly driving it. So can his five-foot-five daughter. Or her 65-year-old grandmother. 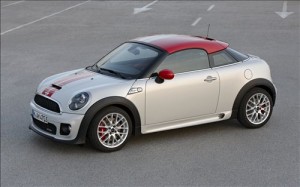 The Mini is also inexpensive – around $19k to start, which is cheap for a new car. And it’s very fuel efficient:  Almost 40 MPG on the highway. It has a pleasantly spacious – even practical – interior for such a small-on-the-outside car. It is easy to drive, fun to drive – and affordable to drive.

In a very real sense, the modern Mini is more like the old VW Beetle than anything else on the road ( including the New Beetle  – which is too big, too thirsty, too expensive and probably too sporty, too.)

Well, what about this new two-seater Mini coupe?

Has it got the Mini mojo, too?

The Mini coupe is a two-seat version of the regular Mini – the nomenclature being a tad confusing since both cars have two doors for passengers and a hatch in the back for accessing the cargo area. So technically speaking, they’re both hatchback coupes. 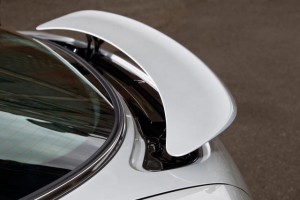 The coupe differs from the regular Mini from the tops of the doors up. It has  a steeply raked windshield and its roof sits about an inch lower than the regular Mini’s. It also has unique bits such as a Porsche-like rear airfoil that deploys automatically at 50 MPH.

Like the regular Mini, the coupe is available as a hardtop or convertible and in standard, turbocharged S or even-more-turbocharged John Cooper Works (JCW) versions. Base price for the hardtop coupe is $21,300. A JCW coupe lists for $31,200. The convertible starts at $24,530 and tops out at a $34,500 for the JCW version.

The two-seater version of the Mini is all-new.

A different look than the regular Mini.

Same performance as the regular Mini, in spite of the much more aggressive looks.

Much less room inside than the regular Mini.

Diminished view of what’s outside and all around you due to to the lowered roofline and thick C pillars. 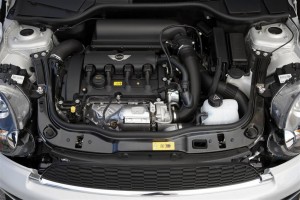 The Mini coupe has the same drivetrain options as the regular Mini – and this could be a problem for Mini with this model, which is built around its sportier-than-normal image.

As in the regular Mini, the coupe’s standard engine is a 1.6 liter, 122 hp four cylinder paired with either a a six-speed manual or (optionally) a six-speed automatic.

There is a significant difference in performance between the manual and automatic-equipped Mini coupe: The six-speed stick version can do the 0-60 run in a sprightly 8.2 seconds; the automatic is more than one full second slower, solidly in the mid nines. That’s not a bad number for the regular Mini – which doesn’t present itself as a sporty car as much as a fun-minded economy car. But in the aggressive-looking coupe, it’s disappointing. Just my 50 cents, but if I’d been in charge at Mini, I’d have given the Mini coupe  a few more oats – and better acceleration – than the regular Mini.

Same issue with the S and JCW versions of the coupe. They’re not borderline slow – the turbocharged S, with 181 hp, gets to 60 in a presentably quick 6.4-6.7 seconds (even with the automatic). And the JCW version – which gets a higher-boost version of the 1.6 engine jacked-up to 208 hp, is capable of getting to 60 in just over six seconds flat with the six-speed manual. 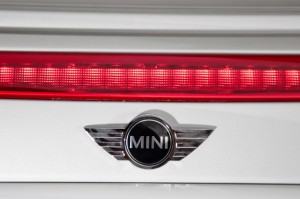 These are good numbers – but they’re also the same numbers as the regular Mini.

Which isn’t surprising, given the engines are identical. Even the curb weight is identical – or nearly so. The hardtop Mini coupe is actually a bit heavier than the standard Mini. It specs out at 2,557 lbs. vs. 2,535 lbs. for the regular Mini hardtop.

Gas mileage is also virtually identical: The base coupe with 1.6 engine and six-speed stick gets 29 city, 37 highway. Even the high-performance JCW manages a very respectable 25 city, 33 highway.

One fly in the pie, though. All the Mini’s engines – including the base non-turbo 1.6 engine – require premium fuel. 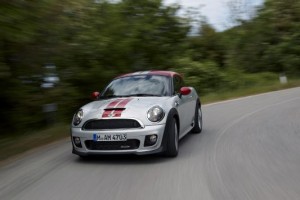 If you’ve driven the regular Mini, then you already know how the Mini coupe drives. Acceleration and handling is indistinguishable. Both are as agile as a greased trout in a cold stream – and just as capable of darting around obstacles and passing through what in almost any other car would be an impossibly small space. Parking is point-and-click easy; in – and out. No backing in, then out – then in and out again.  You will have room left over in your garage, too.

The major difference between the two is visibility. In the regular Mini, you’ve got an almost panoramic view all around, thanks to the high glass that envelopes you. This makes the car easy to drive fast in traffic without second guessing. You know where you are – and you know where other cars are. It  also makes the regular Mini’s cabin feel even roomier than it is. Like the original 1960s Mini, it’s a small car that even very big people can drive – comfortably.

But the coupe is a different story. The windshield is much more steeply raked – and the roofline about an inch lower. So far, no problems. Even very tall people (like me – I’m 6 ft. 3) still fit inside with room to spare, including airpsace between the top of my head and the Mini’s ceiling. Forward visibility is still ok, too – although not as expansive as in the regular Mini. 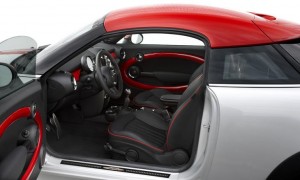 The problem comes when you turn your head to see what’s coming down the road before pulling into traffic. Because much of what you’ll see is the Mini coupe’s passenger seat headrest (to your right) which almost entirely occludes the tiny rear quarter window. The unusually shaped roofline conspires to make matters worse. It tapers backward and then just behind the driver’s door, each side of it begins to extend down several inches, kind of like a baseball batter’s helmet, as the leading edge of the molded-in roof spoiler sprouts toward the back of the car. It looks neat from the outside, but the downside is that from inside the car, you won’t see much to your sides. The view behind is also compromised. You learn to use your mirrors – and your front seat passenger – to confirm what’s coming.

Have him or her lean out the window and look – before you leap.

The Mini coupe looks smaller than the regular Mini but both are exactly the same length (146.6 inches) and share the same wheelbase (97.1 inches). The only significant dimensional difference between the two is height. The regular Mini stands 55.4 inches – the coupe, 54.3 inches.

I’ve mentioned the sharp-angle windshield and “batter’s helmet” roof. You also get an automatic-deploying rear spoiler that pops up whenever your speed hits 50 MPH. Its job is to provide additional downforce on the car’s rear end, to aid traction and stability. 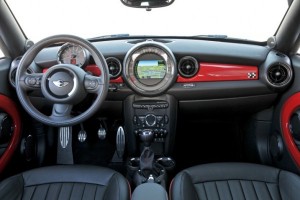 The inside is similar to the standard Mini: Same large centrally-mounted dial-type speedo, tachometer mounted on the steering wheel in the driver’s line-of-sight, old-timey Limey-style toggle switches to operate the power windows and other functions. Behind the driver and front-seat passenger are molded “speed cones” that taper back to the cargo area. Which is a decently usable, if not over-large, space.

The back hatch opens low and wide, maximizing access to the available space. But, there is much less space (just 7 cubic feet) than in the regular Mini, which has more than triple the available real estate at 24 cubic feet with its back seats folded down.

Like the regular Mini, the coupe can be highly customized with dealer-available accessories, including custom graphic packages. 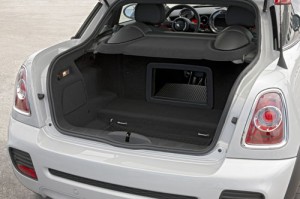 I understand why Mini added to the coupe to the mix. The regular Mini has been around for ten years – can you believe it? – and like any other automaker, Mini knows that newness keeps people interested. And, the Mini has always had a sporty character – even if it started out as an economy-minded car. ’60s-era Minis were almost immediately hopped-up for better performance – and the S and JCW versions of the current Mini are popular with buyers. It’s a reasonable step to add a more obviously enthusiast-minded Mini to the lineup. Even the absence of back seats in the coupe is not-unreasonable, given that the back seats in the regular Mini are not fit for people anyhow.

So, the basic idea seems sound to me.

But I’m not so sure about the execution. The coupe should at least be lighter than the regular Mini. That all by itself would have given it a performance edge. Failing that, the coupe could use some extra horses – not necessarily a stampede of them. But enough, at least, to put some daylight between it and the regular Mini. That’s what Fiat did with the Abarth version of the 500 – which gets a unique-to-that-model turbocharged engine and much-improved performance over the regular Fiat 500.

If it’d been my call, the base coupe would have come with the regular Mini Cooper S model’s upgraded suspension and wheel/tire package, plus at maybe 10-20 more hp out of the non-turbo 1.6 liter engine. A free flow exhaust and some tuning should be all that’s needed to get there. The coupe S should have 200 hp – and be almost as quick as a JCW regular Mini.

And the JCW coupe ought to be quicker still. Cutting its curb weight by 200 pounds would do the trick. 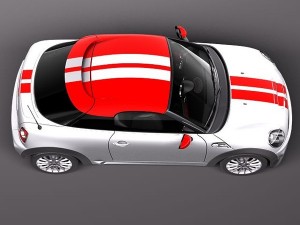 Absent better performance, one wonders (well, I wonder) how many people will put up with the coupe’s compromises without the compensation of better-than-standard Mini performance.