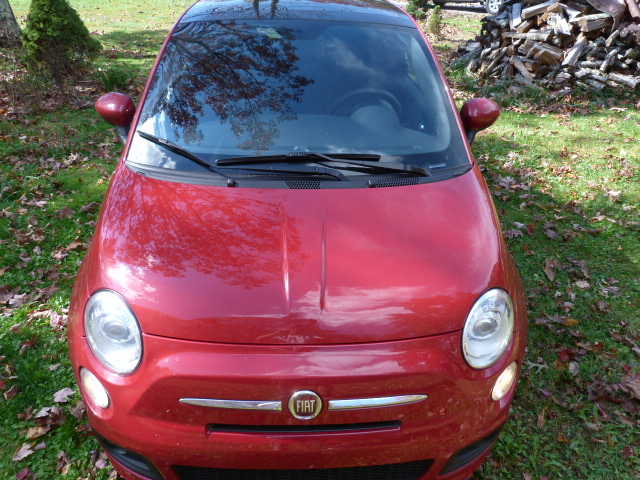 But I quickly fell in love with it.

It may be my favorite new car. I’d consider buying one myself – and that is an eruption of affection from me, a guy who reviews new cars but mostly owns and drives old (and ancient) stuff.

There are just two reasons I could come up with to not buy this car (if you’re in the market for a new subcompact runabout and don’t want to spend more than about $17k or so).

I’ll get to that shortly.

The Fiat 500 three-door hatchback coupe/convertible is one of the new (to us) export market micro-cars, commonly available – and hugely popular – in places such as Europe and Japan but only just now making their way to the United States.

It is considerably smaller than a U.S.-market standard “compact” – or even a current-year subcompact such as a Toyota Yaris. In fact, it’s almost a foot shorter, end to end, than a ’90s-era Geo Metro.

How’s that for small?

Prices for the hardtop start at $15,500 for the base Pop coupe with manual transmission and top out at $19,500 for a top-of-the-line Lounge with an automatic. A Sport version of the hardtop with firmer suspension calibrations and other upgrades is also available; this version of the 500 has a base MSRP of $17,500.

The 500’s target competition includes the BMW Mini Cooper (base price $19,500) and other compact/subcompact runabouts like the Toyota Yaris (base price $14,115), among others.

The 500 is the first new Fiat to be sold in the United States since 1983. The Italian automaker now has a controlling stake in Chrysler Corp. and the 500 will be marketed and sold through the existing Chrysler dealer network (a big part of the buy-out agreement) as well as through Fiat “Studios” that will operate independently of Chrysler stores.

Still a real car (unlike the Smart car).

A much nicer car than existing econo-subcompacts like the Yaris.

Not so great gas mileage (27 city/34 highway) with optional automatic.

Fiat dealers (“Studios”) are few – and far between.

All versions of the 500 are powered by a 1.4 liter four-cylinder equipped with what Fiat calls MultiAir technology. The intake valves are operated hydraulically (no camshaft) and are fully variable while the exhaust valves are opened and closed via a conventional camshaft. Fiat says this set-up allows the 1.4 liter engine to produce 10 percent more power (and use 10 percent less fuel) than an otherwise equivalent engine with conventional intake and exhaust cams operating the valvetrain.

The 1.4 liter engine, like the car it’s in, is one of the smallest things going right now (even the also-tiny Mini Cooper has a larger 1.6 liter engine).

A six-speed automatic is optional, but it imposes a significant fuel economy penalty of about 3-4 MPG. Manual equipped 500s rate 30 city, 38 highway (dead even with the Yaris and slightly better than the Mini’s 29 city, 37 highway)  but if you order the automatic, the 500’s EPA rated mileage drops to 27 city, 34 highway.

This is a head-scratcher because usually (these days) a given vehicle will be as or even slightly more fuel-efficient when ordered with an automatic vs. the same car with a manual – because modern automatics are (usually)  more efficient than manuals, in part because they’re programmed to shift at exactly the right moment for any given circumstance whereas human drivers often  shift too early (or too late) and keep the transmission in the wrong gear for optimum mileage.

Yes, it’s tiny, but unlike the absurd SmartCar, you can go anywhere in the 500 – even if anywhere is on the highway and several hundred miles away.

The 500 will do almost 100 MPH in third gear. It has no trouble comfortably maintaining a cruising speed of 70-75 MPH.

A Geo Metro, this ain’t.

It’s also stable at high speed – something I didn’t expect given the super short (90.6 inch) wheelbase (that’s seven inches less than the Mini’s wheelbase of 97.1 inches) and “tall box” layout. I thought for sure it would require a death grip on the wheels just to keep it in its lane, but absolutely not. At the speeds it is likely to experience on American roads and in the hands of American drivers, it is as stable as a Swiss Franc. And even at European road speeds – which can be in the triple digits – the Fiat is fine. (Try a Smart car sometime; it’s not fine.)

I live up in the hills – literally. You have to climb a 9 percent grade from the valley to get to the top of the ridgeline near where we live. The 500 requires you to work the transmission, but does not lack for power. In fact, you’ll enjoy working the transmission – and the engine – which (like the Mini) has a nice angry sound to it when you’re up in the powerband (7,000 RPM redline) and seems – like so many European-bred cars – to enjoy a good workout, too.

It also handles like the proverbial slot car. My tester was a Sport model and so came equipped with larger (16 inch) wheels and more aggressive tires (P195-45-16 Pirelli Cinturatos)

plus a firmer-calibrated suspension, and was as or even more enjoyable to flick around as the Mini Cooper – but with a price tag of $17,500 you’ve got two grand left in your pocket to spend on gas for the next year. The base model 500 is $4,000 less than the base model Mini – and as cute and fun to drive as the Mini is, that $4k price difference is sure to make a lot of potential buyers’ heads turn in the direction of a Fiat Studio.

If they can find a Fiat Studio, that is (more below).

Yet it has virtually the same front seat head and legroom (38.9 and 40.7 inches, respectively, vs. 38.8 and 41.4 inches) and slightly more backseat legroom (31.7 inches vs. 29.9 for the Mini) though headroom for backseat occupants is tight (and about an inch-and-a-half less than in the Mini Cooper.

With the back seats folded down, the 500 has 30.1 cubic feet of cargo space – exceptional for a car with such a small footprint and about 6 cubic feet more than you’d have available in the physically larger-on-the-outside Mini Cooper (24 cubic feet max capacity).

Like the Mini, the Fiat has an interior with a lot of pizazz – as well as room for its size.
There’s a large, centrally mounted “ring within rings” speedometer/tachometer combination, with an LCD info center built into that and which you can toggle through multiple menus. A console mounted shifter frees up console space (where there’s a modular two-piece cupholder and 12V powerpoint) and the controls for the AC and heat are simple, effective large dials instead of too many small buttons as in a lot of current cars.

Interior trim panels can be ordered painted in the same color as the exterior and there is a whole panoply of paint/decal/accent stripe combos available, as well as a roster of dealer-installed options such as a roof-mounted bike rack, ski or snowboard racks and “Thule” roof-mounted cargo storage bag.

Nothing about the car says Blue Light Special. In this respect it is night and day different from the subcompact economy cars of the past, like the Geo Metro – and also, the subcompact economy cars of today, like the Yaris. The little Toyota is a fine A to B appliance, but other than its low price and great gas mileage, there’s not much else about it that will make you smile. And you certainly can;t order a Yaris with equipment such as heated seats, leather trim and red powder-coated high-performance brakes, either. The Mini’s similarly snarky – but that $4k price gap is hard to put out of your mind.

Only two things would give me pause about buying this car – and one has nothing to do with the car itself.

Rather, it has to do with other cars – and the half-asleep/gadget fiddling people driving them.

What that means is that while a 500 would do better than most if it got into a wreck with another car roughly the same size and weight, it would be ugly if it got hit by a car two or three times its size.

Which in America, means almost any car (or truck/SUV) you’re likely to end up being hit by.

In Europe, small cars are the norm – and big trucks and SUVs almost nonexistent. So the Fiat is playing on a more level field. But here in the U.S., the Fiat is pretty much the tiniest, lightest car on the road, a minnow among sharks – or whales.

If I bought a 500, I’d drive it like I ride my motorcycles – with extreme paranoia, always assuming the worst of other drivers and with both eyes wide open, all the time.

The other thing that would make me think a little before buying a 500 is Fiat itself. Not the tired old saw about the reliability of Fiat cars; that hasn’t been an issue for years – no, decades. The company is a major player in Europe and its cars have a good record over there.

Rather, my concern would be about Fiat’s future here. It is no easy thing to get traction in the U.S. car market under the best of circumstances and as everyone knows, these are not the best of circumstances. The economy is terrible, and, frankly, so is Fiat’s current distribution/service network. Even though (ostensibly, reportedly) Fiat cars were going to be sold through Chrysler’s existing network, at the time of this review, there was only one authorized Fiat “Studio” in the whole state of Virginia. In my area, the closest Fiat store (oops, Studio)is more than two hours away in North Carolina. If I bought a 500 today  and needed the dealer to deal with something, it’d be an all-day deal just to get the car to the shop – and then, how do I get home again?

If the Fiat-Chrysler venture doesn’t work out – either because of the crappy economy or because of the spotty dealer coverage – and Fiat has to leave this market (again) that could also leave owners owning orphaned cars with no dealer support network and possibly, major hassles getting parts and service, period.

That stuff in mind, the 500 has got the market potentially cornered. It kills the Mini on snazzy-for-your-dollar, matches basic econoboxes like the Yaris on everyday economy (and nearly matches it on price, too) while also offering upscale amenities (including Bluetooth wireless, a panorama sunroof and heated seats) along with and almost endless customization options while almost fitting in your back pocket, too.