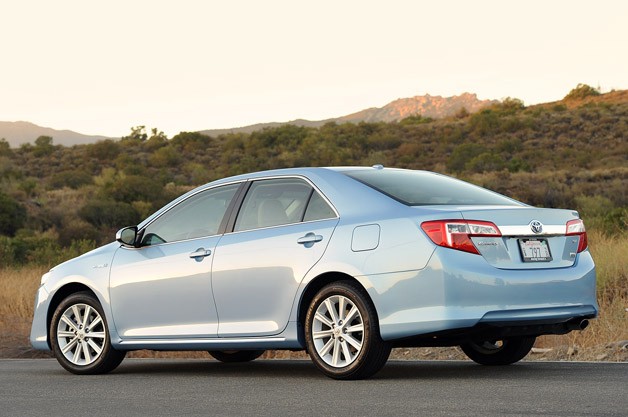 Does the Camry hybrid – vs. the regular Camry – make economic sense? 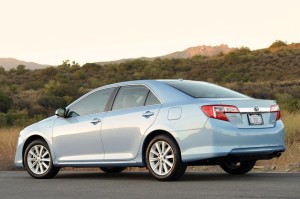 Or is it an emotional (and political) thing primarily – as in: Hey, look how much I care about the environment?

On the one hand, the Camry hybrid will cost you $3,460 more to buy than an otherwise equivalent non-hybrid Camry LE. That sum buys a lot of gas – even at the current appx. average of about $3.20 per gallon.

In fact, it’s big enough that you’ll probably make up the $3,460 extra you spent up front after about 3-4 years of driving (assuming you drive about 10,000 miles annually). 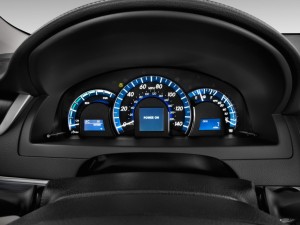 And after that – once you reach “break even” – the savings really begin to add up. Compared with the non-hybrid/four-cylinder Camry, your fuel bills should be one third to one-half lower.

There are of course other things to consider about the Camry hybrid – mostly good (and very little that’s bad).

Let’s have a look at them now.

The Camry hybrid is exactly that – a hybrid version of Toyota’s perenially-popular mid-sized family sedan. Base price is $26,140 (vs. $22,680 for the otherwise similar, non hybrid Camry LE) with a top-of-the-line XLE topping out at $28,625. 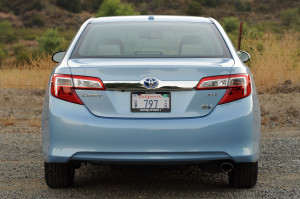 The Toyota’s not the most gas-sippy of these hybrid sedans – that honor goes to the new Accord hybrid, which is the first hybrid other than a Prius to be awarded a 50 MPG rating (city) by the EPA.

Nor is it the least expensive hybrid sedan in this class – that would be the Sonata hybrid (although just barely). And it hasn’t got the most front seat legroom – the Ford Fusion beats everyone on that score.

But it’s a much better deal than the new Accord hybrid – which starts at almost $30k.

And it’s quicker than the Fusion hybrid.

With more backseat legroom – and a larger trunk – than all of them.

In other words, while it may not be luminously exceptional in any one respect, it’s pretty damn good at everything. 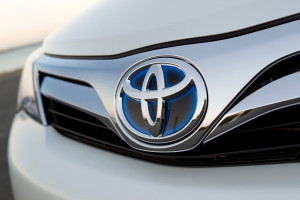 An SE trim has been added to the mix, which includes sportier bucket seats (same as in the non-hybrid Camry SE) and exterior/interior trim, as well as larger (17 inch) wheels, which sharpen up the steering response and handling a little but which also reduce the car’s fuel economy potential (due to the increased rolling resistance) and will aslo increase your tire replacement costs down the road. 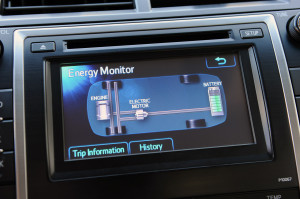 Roomiest trunk in class – most backseat room in class.

Hard to do better, resale value-wise.

If it’s excitement you’re after, look elsewhere. This is the girl you bring home to meet mom.

Toyota’s comprehensive warranty is still just three years/36,000 miles. The hybrid-specific components such as the electric motor/battery pack are covered for longer (eight years, 100,000 miles) but the coverage on the car itself is on the skimpy side. 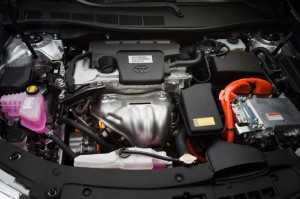 The Camry hybrid is pretty muscular – as hybrids go.

Combined output of the 2.5 liter gas engine and electric motor/battery pack is 200 hp – more than the base-engined/non-hybrid Camry (178 hp) and top of the class relative to its hybrid rivals (the Sonata hybrid comes in second with 199 hp; the new Accord’s a close third with 196 – and the Fusion hybrid is way back there, with just 188 hp on tap).

Performance is excellent: The hybrid Camry does zero to 60 in about 7.6 seconds through the Continuously Variable (CVT) automatic transmission. This is almost a full second quicker to 60 than the non-hybrid/four-cylinder-powered Camry (8.4 seconds). And remember – the hybrid’s in-city mileage is 18 MPG better than the non-hybrid Camry’s fairly wretched 25 MPG.

The new Accord hybrid is quicker than the Camry hybrid – but only just barely: Zero to 60 in about 7.5 seconds, an imperceptible difference. 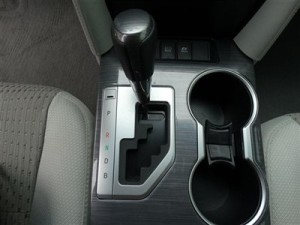 Not so imperceptible is the Accord hybrid’s stunning fuel efficiency – 50 city and 45 highway. The Accord’s highway number is actually better by 2 MPG than the Camry hybrid’s city number.

The Accord hybrid is however priced about $3,000 more to start than the Camry hybrid – and that negates much of the Honda’s over-the-road efficiency advantage. Not to mention makes it harder to buy.

A more serious threat to Camry comes from Ford.

The Fusion hybrid’s mileage – 47 city and highway – is significantly better than the Camry’s in either category. And unlike the Accord, the Fusion hybrid is priced very competitively.

It is, however, on the slow side. 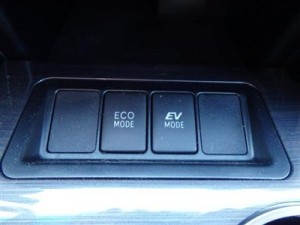 So, by the way, does the Hyundai Sonata hybrid.

That 1 second difference may not sound like much, but in real-world driving, it’s a major margin. I’ll get into that more below.

Like the Prius, the Camry hybrid is capable of moving forward on its batteries alone – for short hops, about a mile or so – at speeds up to about 20 MPH. This set-up is ideal for stop-and-go city driving and if that sort of driving constitutes the majority of your driving, you’ll find the Camry hybrid’s cost-benefit equation much more favorable  – and favorable sooner. 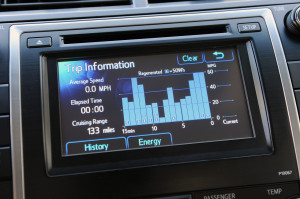 But even in mixed-use (city/highway) driving, the Camry hybrid’s average mileage is very good. I achieved an average of 33.7 MPG during the week I test-drove the car – and that was with me driving 75-80 for probably half the time.

Unfortunately – or not, depending on how you run the numbers – Toyota doesn’t offer a plug-in version of the Camry hybrid (as Ford does with the Fusion hybrid). The advantage of the plug-in layout is you can charge up the car’s battery pack without running the gas engine. In a regular hybrid, the only way to recharge the batteries (other than recapturing some of the energy of deceleration via regenerative braking) is by running the gas engine – which acts as an on-board generator. That, of course, uses gas – and that lowers the car’s overall economy of operation. 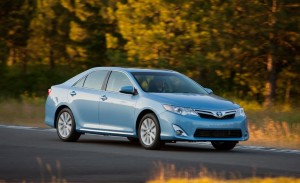 The Camry hybrid has power to spare – vs. just barely enough power to keep up with traffic. Which matters when you roll up behind a slow-moving RV and have only so much time (and so much road) to bust a move around it. Or when you’re trying to merge with unfriendly highway traffic that doesn’t have time to accommodate slow-pokes.

To me, this extra juice is worth losing a few MPGs over.

The Fusion is a nice car – and its mileage is laudatory. But it’s right on the cusp of being too-slow-for-comfort under ideal conditions (flat road, just the driver on board).  Put two passengers in it – and task it with passing a dawdler on an uphill grade – and you’ll probably find yourself agreeing with me that maybe a using a little more fuel is worth having a lot more power/performance. 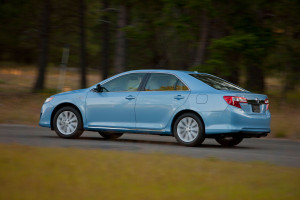 A big difference, Camry-wise vs. its rivals, is the Toyota’s cush rather than sporty ride. This is most noticeable when you drive the new Accord hybrid and Camry hybrid back-to-back. It’s not that the Accord’s a rough rider. It isn’t. But it’s definitely firmer-riding than the ultra-posh Camry.

On the other hand, the Camry’s steering and handling are not as tight-feeling as the Accord’s. It also has a lower threshold of lateral grip. Toss both cars into a curve at car journalist velocity and the Camry’s tires will squeal first, its TCS will intervene sooner. 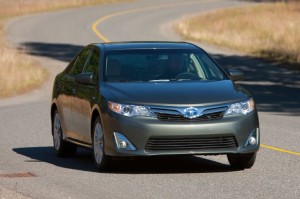 The question is – or should be – do you drive that way?

If not, the Camry’s high-speed cornering attributes are probably irrelevant – whereas the noticeably posher everyday ride is an everyday plus.

The Camry hybrid – like the others it competes with – does not announce its hybridness to the world. It looks pretty much like any other Camry from the outside – except for subtle differences like the “blue halo” around the Toyota badge in the grille. And on the inside, the differences are limited to a hybrid-specific gauge cluster with a “charge-ECO-power” meter in lieu of a tachometer to the left of a conventional speedometer and an energy transfer monitor and mileage tracker display in the LCD screen in the center stack. Otherwise, it’s pretty conventional – including the normal/conventional console-mounted gear selector instead of the geeky toggle thing in the Prius. 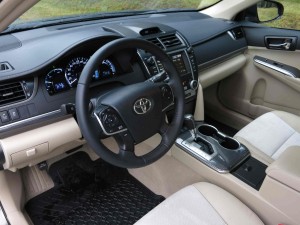 You get the idea.

Yeah, it’s pretty vanilla. But that is one of the secrets of its enduring appeal. It’s a car anyone can feel comfortable in because it doesn’t make an issue of itself. Its controls are all immediately comprehensible and easy to operate. It drives pleasantly, hits you with no surprises. This is a Ten Year Car – one for the long haul.

Camry’s rivals are beginning to muscle in on one of the Toyota’s historic selling points – its generous interior space. The new Accord, for instance, has 42.5 inches of front seat legroom vs. the Camry’s 41.6  inches. The Fusion ups the ante to 44.3 inches. And Hyundai says let’s get nuts with an astounding 45.5 inches (four inches more than a full-size Mercedes S-Class!). 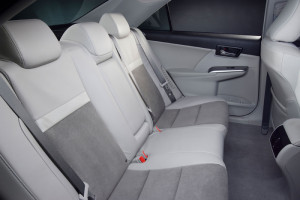 The Toyota also has the most trunk space – though (being hybrids) all the cars discussed have comparatively small trunks (the batteries eat up a lot of space). Still, Camry’s 13 cubes beats the Accord hybrid’s 12.7, the Sonata’s 12.1 and the Fusion’s 12. 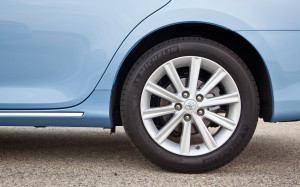 The Camry hybrid’s economics hinge on how you drive – as well was what you buy. Take note of the fact that ordering the optional 17 inch wheel/tire package (standard on the new Sport trim as well as the luxury-themed XLE trim) noticeably notches down the mileage – to 40 city, 38 highway. That’s what increased rolling resistance will do for you.

It will also firm up the ride – which kind of runs contrary to the Camry’s grain. If sporty is a big issue for you, the Accord hybrid might be the better choice for you. Pick the Camry for its virtues; don’t try to make it into something it’s not. 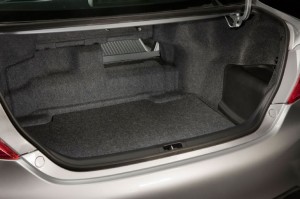 I’m surprised Toyota continues to get away with its paltry 3/36 comprehensive warranty – but it goes to show you just how blue chip the brand is. People trust Toyota. And until there’s some reason not to trust Toyota, they’ll probably be able to sell cars hand over fist – whatever the warranty.

GM could learn from this but probably never will.

Though the competition is nipping at its heels, the hybrid Camry hybrid’s still got “just right” covered better than they do. The new Accord hybrid is impressively fuel efficient – but its high price makes it a harder sell . . . if you care about saving money as opposed to just saving gas. The Fusion is a very nice car, a very economical car – and very attractively priced. But it’s also very slow – and that eats into its fun to drive. 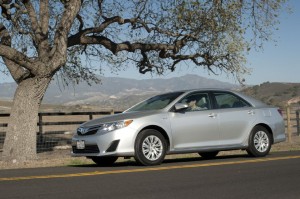 The Sonata hybrid’s mileage, meanwhile, is mediocre . . . and its back seat is medieval compared with the others in this class.

Which leaves – yup – the Camry.

It’s efficient, but not overpriced. Quick – and comfortable. Plus, it’s the safe bet. Odds are it’s not going to turn out to be a lemon – or worth half what you paid five years from now.

That’s an intangible, of course. But it’s a big part of the reason why Toyota sells nearly half a million Camrys each year. And thus, it might be more important than any of the tangibles.

Eric Peters is a veteran car/bike journalist and author of Automotive Atrocities and Road Hogs. Twitter handle: LibertarianCarG (they would not let me have LibertarianCarGuy).