American car companies lost market share in the ’70s and ’80s to a great extent because they lost consumer confidence. Hit or miss quality control – an endless conga line of embarrassing recalls.

Buyers came to believe that American cars were second-rate.

It’s happening all over again – only this time, it’s the Japanese (and specifically, Toyota) that are falling apart at the seams – with American car companies like Ford standing ready to pick up the pieces.

Take a look at the 2011 Fusion hybrid sedan and you’ll understand why.

After an extensive redesign last year, the Fusion hybrid gets another dose of updates for 2011 – including available rain-sensing wipers, HD radio, a Blind Spot Warning System for the outside rearview mirrors and Ford’s programmable MyKey valet/parental control system, which lets the owner limit the car’s top speed capability and other functions.

Best-in-class fuel economy (41 mpg in city driving vs. 31 for the Toyota Camry hybrid and 33 for the Nissan Altima hybrid).

Can be driven at speeds approaching 50 mph on battery power alone.

Things actually happen when you push down on the gas pedal.

All of them cost more than a Prius (base price, $23,050) and are 10 mpg or more off the Prius’ best-case fuel economy capability.

Though technologically impressive, hybrids like the Fusion (and the rest of them) may end up costing you more money than a conventional (non-hybrid) economy car… if gas prices remain steady.

Technological improvements to non-hybrid cars are closing the fuel economy gap. Some mid-sized non-hybrid sedans like the new Hyundai Sonata can get 35 MPG (or more) without the complexity and expense of hybrid equipment. A diesel-powered 2012 Passat (coming in Spring) should be able to match the MPGs of all hybrids except the Prius.

The Fusion hybrid is powered by a 2.5 liter gasoline engine and electric motor/battery pack that together produce the equivalent of 191 hp.

A continuously variable automatic transmission (CVT) is the standard and only available transmission.

While other Fusions can be ordered with all-wheel-drive, the hybrid version (like all other current hybrids) is FWD-only.

Acceleration is excellent – by hybrid standards: 0-60 in around 8.4 seconds. For comparison, a Prius hybrid needs about 11 seconds to reach 60 mph.

On the other hand, in the category that matters most to people shopping hybrids – fuel economy – the Fusion is the clear winner. It is capable of a very impressive 41 MPGs in city driving and 36 MPGs on the highway – which easily beats the Camry hybrid’s 31 city/35 highway and the Altima hybrid’s 33 city/33 highway.

The Fusion thus offers a mid-point between the galloping slowness of the Prius and the not-so-great fuel economy of the Altima and Camry hybrids.

The thing I liked most about the Fusion hybrid is that it doesn’t drive like a hybrid. It’s not clumsy and clunky feeling like the Prius – and to a lesser but still significant extent the Camry hybrid.

It has power enough to not feel like you’re abusing it just trying to keep up with the flow of traffic – an everyday issue in the Prius.

With almost 200 hp available, the Fusion actually has a better power-to-weight ratio than many ’70s era V-8 powered muscle cars – and is quicker than they were, 0-60!

Another high point is the Fusion’s standard Continuously Variable (CVT) automatic transmission. Unlike some other CVTs on the market, it is quiet – even under full throttle – with the upsides of no drink-spilling shift-shock between gear changes.

Because with a CVT, there are no gear changes.

The transition between gas-assisted and pure electric mode is almost completely seamless; you barely feel the automatic starter kick the engine to life – or notice when the gas engine automatically shuts down. But you can keep track of what’s happening by watching the vertical bar graph displays in the gauge cluster – which are in my opinion the best hybrid gauges on the market. They’re very straightforward; no silly animated displays – just “up” or “down” depending on how you’re driving. You don’t have to read a manual to get it; the readouts are immediately understandable.

The main reason for the Fusion’s significantly better fuel economy potential is that (like the Toyota Prius) it can run in pure electric (EV) mode at higher speeds approaching 50 mph.

In the Camry hybrid, the gasoline engine automatically kicks on at around 30 mph.

But there’s a caveat: Although it is possible to get 40-plus miles per gallon in the hybrid Fusion, it’s not easy. You’ll need to adjust your driving style. Meaning – slow and steady (or steady and slow). You must learnt to accelerate gradually – using the dashboard instruments to help you stay in electric-only mode for as long as possible.

I averaged around 35 miles-per-gallon, according to the car’s computer – which is still quite good, especially given that I live in a rural and mountainous area, not the best-case environment for any hybrid.

These vehicles do best in urban-suburban environments, where lower speed/stop-and-go driving is the rule.

One of the attractions of the Fusion hybrid is that it doesn’t look like a hybrid – inside or outside. There’s no fish-eyed geekiness outside or over-teched awkwardness inside (as in the Prius, with its strange, not-easy-to-use toggle shifter and gimmicky displays). Everything is very straightforward, just like in a standard car – with the only obvious difference being the Fusion hybrid’s LCD gauge cluster. There’s a central speedometer flanked on either side by the important hybrid readouts, in bar graph form.

The most important of these is to the immediate left of the speedometer; it lets you know when the car is running in pure electric mode – which you’d otherwise be unable to tell, once the car is moving. The gauge can help you operate the car as much as possible in EV mode, to achieve the maximum fuel-efficiency. It can also tell you how much power accessories (such as AC) are drawing; current battery charge, instant and average fuel economy, miles to empty – and many other things besides.

Though I found the cluster very easy to understand (and to use) Ford includes a tutorial mode to show the owner how it all works.

The Fusion hybrid also has a useable 12 cubic-foot trunk vs. the pocketbook-sized 10.6 cubic footer in the Camry hybrid. While 12 cubic feet isn’t huge, it’s enough to keep you from constantly having to use the back seats to carry home stuff.

Ford did a much better job packaging the Fusion hybrid’s battery pack than competitors.

As an alternative to the Prius – which has all the personality of a brine shrimp – giving up 10 MPGs seems like a solid deal. It’s the price difference that’s harder to get around: 10 MPGs better at-the-pump-performance plus $5,000 more in your pocket (the difference in MSRP between the Prius and the Fusion).

On the other hand, it is entirely possible that gas prices could jump back up to $4 (or more) per gallon at almost any time – and it’s a very good bet they will increase over the next five years. That would be a game changer. If say unleaded regular suddenly costs $5-$6 per gallon, the Fusion’s efficiency advantage will be enormous – and it’ll be the hottest thing going next to $1 pitcher night at your favorite sports bar.

And relative to its main competition – the Camry and Altima hybrids?

Its gas mileage is superior by a considerable margin – enough to wash away the Camry and Altima’s lower up-front prices at current prices within a couple of years of purchase. But if gas prices uptick by $1 or more, the cost differential will equalize in as little as a year – and after that, you’d be saving serious money every time you drove the thing.

Plus, there’s the quality thing. No one’s accused any Fords of deciding to accelerate on their own.

No recall ugliness, either.

Up to now I have not been a fan of hybrids; to be specific, I have questioned their merits as economy cars.

But I was impressed by the Fusion as both a hybrid and as a car.

Of all the hybrids on the market right now, I’d say this one’s not just the best of the lot.

It’s the only one that makes any real sense. 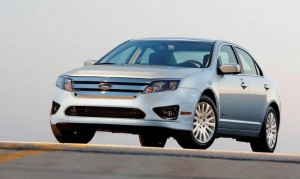 But, What About The Blind?