One of the greatest things about the Great Whales of the past was their names. Today, everything’s alpha-numeric. “X” This and 123 that. All the good names have either been taken, are owned by someone else – or couldn’t be applied to a modern car without inciting rib-cracking laughter.

Real wagons are long gone. Today’s “crossovers” are just minivans in drag – or sports sedan wannabes. Many are quick, it’s true – fully capable of doing figure 8s around an old school battlewagon in terms of what is known as “driving dynamics” in these, the latter days of the empire.

But it was not always so. A time existed when wagons weren’t wimpy crotchfruit conveyances – or SUVs suffering from an identity crisis. No all-wheel-drive, no 21 inch rims – no flat-screen TVs or built-in child seats. Just acres of steel and miles of chrome, with rear-facing jumpseats and no seatbelts for the kiddies – who got to roll around like logs on the flat rear floor as the weight shifted around every corner

It was an experience today’s generation will never know – and which an earlier generation experienced in sheetmetal sauropods such as Chevy’s Kingswood Estate wagon.

It rode on GM’s super battleship “B” platform, the same basic keel used from the mid-’60s through the mid-1990s, when the last of the line (in the form of Buick’s Roadmaster/wagon and the Chevy Caprice/wagon) were finally given the needle.

Though GM (and Chevrolet) had built wagons before, models like the Kingswood would prove the fullest expression of the concept. In the late ’50s, the designation was applied to mid-trimmed wagon versions of the Bel Air just under the well-known Nomad series. Beginning in ’69, the Kingswood designation migrated to the Impala lineup, where checking that option box meant you got a full-sized wagon on the Impala’s chassis, with two or three rows of seats and standard V-8 power flowing to the rear whitewalls via a three-speed column-shifted manual transmission.

Buyers could order a power rear window – or step up to the top-trim Kingswood Estate, which came with it included. Creature comforts abounded – from power windows and locks all around to cruise control and Freon-powered air conditioning that delivered meat locker cold sufficient to frost the chrome-trimmed vents.

But the Kingswood’s signature feature was the outward swinging rear gate – fully carpeted on the Estate – which provided access to the cavernous rear cargo (or kid-carrying) area. In those pre-seat belt, booster seat-free days, young ‘uns were free to flop around back there – protected against injury not by air bags and ABS but thick-cut steel. People under 40 with no direct recollection of these beasts cannot conceive how safe it felt to be cocooned deep within the armored embrace of these magnificent monsters. The distance from the edge of the rear doors to the back of the wagon was easily six feet. The sheet of glass used for the side panels was bigger than the fenders of a new Honda Accord.

Chevrolet’s advertising from the period called them the “walk-in wagons” – and that was no kidding.

And they weren’t just large on the outside. Buyers could choose from a full range of small and big-block V-8s, all the way up to the same basic 396 V-8 that powered muscle coupes like the Chevelle. A few 427 wagons may have been built, too – and in any case, one would fit just as easily. ’70-’71 models could be equipped with the even bigger 454 – as well as dual exhaust and positraction rear.

Put that in your late-model V-6/FWD minivan and smoke it!

* The 1969 Estate Wagon shared the same basic 119-inch wheelbase as the Impala sedan.

*By 1972, the final year for the model series, the wheelbase had grown to a stupendous 125.1 inches.

* Chevy ran an ad for the ’60 Estate Wagon that showed a pop-up camper on the roof; it’s unclear whether such equipment was ever offered as a factory (or dealer) option. 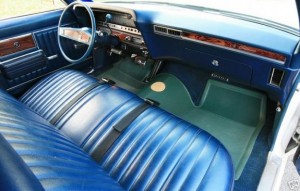