On four wheels, Suzuki is barely even a presence in the U.S market – even though it’s one of the dominant players when it comes to two-wheeled machinery.

For whatever reason, Suzuki seems to have a handle on what American motorcycle riders want – and consistently delivers.

But when it comes to American drivers, the company hasn’t been nearly as successful.

Now comes the new Kizashi sedan. It is definitely different – offering standard near-luxury amenities (including projector-beam headlights, climate control AC and keyless ignition) as well as all-wheel-drive at a much lower price point than other brands charge for their not nearly as well-equipped mid-sized, front-wheel-drive sedans.

But it has one big weakness, at least – and it may have over-reached its target market a bit.

The Kiashi is a brand-new model for Suzuki and the automaker’s first serious attempt to compete head-on against established players in the sporty mid-sized sedan segment such as the Nissan Altima, Honda Accord, Ford Fusion and also the new Hyundai Sonata – among others.

Optional AWD system is driver-controllable and can be turned off or on, as needed – an unusual (and potentially fuel saving) feature.

Market over-reach: Suzuki hasn’t established itself yet as a builder of really good basic cars; leapfrogging ahead to the super-competitive mid-sized sedan market is a gutsy – but risky – gamble.

The 2011 Kizashi comes standard with a 2.4 liter, 185 hp four-cylinder engine that can be paired with either a six-speed manual transmission or CVT automatic.

Front-wheel-drve is standard but the Kizashi can be ordered with Suzuki’s unusual i-AWD system. It’s unusual because it’s a part-time system that’s driver-controlled instead of automatic: The vehicle can be toggled from FWD to AWD by pushing a button on the dashboard.

The ability to turn the AWD off should save some wear and tear over the life of the car – and could give a slight mileage boost when the AWD is turned off due to less driveline resistance.

Virtually all the other AWD-equipped cars on the market are full-time or automatic – meaning the system is always on and the driver has no control over its operation.

The Kizashi (with six-speed manual and FWD) takes about 8.2-8.3 seconds to reach 60 mph. Heavier AWD-equipped models with the CVT automatic take about 9 seconds – definitely on the slow side relative to the competition.

Fuel economy is so-so: 23 city, 30 highway for the FWD/CVT version.

Competitors like the just-redesigned 2011 Honda Accord and the superb 2011 Hyundai Sonata can hit 35 on the highway.

The Kizashi’s potential wow factor – high initially, when you read the impressive roster of standard features for the price – is really let down by its four-cylinder engine and mediocre acceleration, especially in AWD versions.

Though it’s certainly adequate for everyday poking along, the 2.4 liter four-cylinder engine doesn’t match the rest of the Kizashi’s resume – or its curb weight of 3,241 lbs.

You look at the car – with its hunky dual exhaust cutouts, its angry-looking face with those piercing projector beam headlights – and you naturally expect the car to be a runner.

Competition like the Ford Fusion can be armed with more than 260 hp and 0-60 capability that just destroys the Kizashi. We’re talking a two second difference, 0-60.

The Zook is completely outclassed.

Then there’s the new Hyundai Sonata with its standard almost-200 hp engine that also pulls 35 MPGs on the highway – and does it for almost exactly the same money ($19,195) Suzuki is asking for the Kizashi.

Initial, off-the-line acceleration in particular is noticeably more sluggish because a CVT doesn’t have a torque converter as in a conventional automatic. The torque converter helps off-the-line performance by letting the engine build RPMs (and thus power) more quickly when you floor the gas pedal.

The CVT is also noisier than a standard automatic.

When you floor it to accelerate quickly, the engine will spool up to near its redline at 6,000-plus RPMs and pretty much stays there until you back off the gas. This makes the engine sound and feel like it’s straining – which of course it is, because the Kizashi’s just too heavy for 185 hp to cope with comfortably.

The six-speed manual transmission is much better – both in terms of performance and also in terms of less drivetrain noise.

An optional V-6 would be an even bigger improvement – but for the present, it’s the 2.4 liter engine, take it or leave it.

Handling is a good point – especially in the Sport-equipped versions, which come standard with 18-inch spoked wheels and performance tires and which sit 10 mm lower to the ground than other Kizashis as a result of suspension tuning.

The Kizashi’s i-AWD system further improves grip. It can route as much as 50 percent of the engine’s power to the rear wheels. It is tied into the vehicle’s standard electronic stability control system and is set up to improve cornering capability as well as straight line traction. In addition to wheelslip, the system monitors steering inputs and adjusts the power flow (front to rear) accordingly, helping the driver steer his way out of skids and so on.

And features like push-button start, auto climate control, leather trim, etc., are just not found on other cars in this segment – at least, not as standard equipment for about $19k. On this count, the Kizashi outshines even the otherwise standout 2011 Sonata.

The fit, finish and general appearance of the interior is equally sharp. There’s soft-glow ambient LED lighting – and even the glovebox is felt-lined.

Sometimes, when a budget-priced brand tries to move upmarket, the results are a touch on the cheesy-awkward side.

That’s not the case here at all.

It’s as though Suzuki skipped a generation – or even three. This car is so much better, so much more refined than previous Suzukis it’s literally hard to believe.

The Kizashi is physically more compact than cars like the Altima and Fusion – about 7 inches shorter overall. (It’s about 5 inches shorter than a VW Passat.)

This gives it a sportier look, although it means the back seats are more cramped. And the trunk is smaller (13.3 cubic feet vs. 15.3 for the Altima and 16.5 for the Fusion). But if you don’t have a large family to cart around, this likely won’t be an issue and may even be a plus since the Kizashi will be easier to park and will leave more space in your garage.

The On/Off all-wheel-drive is a neat feature and so is the fact is that most cars in this segment don’t offer AWD at all.

And those that do – such as the Ford Fusion – charge a lot more for it.

You can get a Kizashi S with AWD for about $22k. A Ford Fusion with AWD, meanwhile, starts at $28,115 (AWD is paired with the optional V-6; you can’t get AWD with the Fusion’s standard four-cylinder).

Neither the Sonata nor the Altima nor the Accord even offer AWD.

Here’s the Big One.

Suzuki’s cars – so far – haven’t scored as well as the name brand Japanese (or Korean – or American) brands on customer satisfaction, quality and so on. The Kizashi I test drove certainly appears to be an excellent vehicle – and it’s certainly possible it’ll prove to be just as durable and well-made as other cars in this segment.

But it’s also a leap of faith, because it’ll take at least 3-5 years of actual on-the-road experience to know how well-built (or not) this car really is.

The good news is the Kizashi’s drivetrain (engine and transmission) are covered by a seven year/100,000 mile warranty.

The bad news is the basic warranty is just three years/36,000 miles – among the skimpiest you’ll find and much shorter-lived than the warranty coverage offered by Hyundai, among others.

Given how high Suzuki is reaching with the Kizashi – and given perfectly understandable buyer reservations about taking a chance on a Suzuki vs. established safe bets like the Hyundai Sonata or even the Ford Fusion (which has proved itself to be an excellent car) Suzuki probably ought to have upped the basic warranty coverage to at least five years/60,000 miles – the same as current Hyundais and Kias.

All this car really needs to be a standout is another 20 horsepower or so – and a more confidence-inspiring basic warranty.

You won’t find anything equivalent for anywhere near the price. 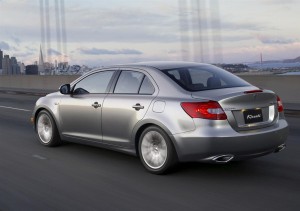