GM apparently has some ‘splainin to do – and not just to Lucy, but also to the American taxpayers who have bankrolled its operations since that terrible I’ve Fallen – And I Can’t Get Up moment back in late ’08.

That new Volt all-electric car you’ve been hearing so much about – and which GM has been touting as an example of its resurgent We Get It attitude – is apparently a con.

Or at least, a semi-fraud.

GM had claimed the Volt would be what amounts to a completely electric car, driven entirely by its electric motor and battery pack. The Volt’s small on-board gasoline engine would only operate as a kind of take-it-with-you recharging unit, power alternators (like a home generator) but not the car’s drive wheels.

The concept was innovative. Other electric cars have been tied down to a fairly small radius that extends only as far as they can travel before having to turn back in time to make it to a recharging station for a top-off. So far, this has meant a real-world operating range of about 75 miles or so under ideal conditions – sunny, warm weather and don’t use the accessories (AC, power stuff) too much.

Under less than ideal conditions – cold weather especially – and if the car has to deal with hills or you use the power accessories – your actual mileage will vary.

This has been a major limiting factor in the commercial viability of electric vehicles since the 1970s and all the way through the ’90s, when GM gave it an earlier go with its EV-1 electric car.

As cool – from a technological perspective – as these things are, a 50-70 mile range is cutting it too close for most people. Toss in a $40k price (for the Volt) and recharge times measured in hours rather than the minutes it takes to gas up a standard car – and it’s no tough nut to see why electric cars have been little more than costly curiosities up to now.

The Volt was supposed to change all that by effectively eliminating the range problem. By carrying its power source (for electricity) with it rather than being tied to a fixed charging station somewhere, the Volt promised the same convenience and ease-of-use as a standard car.

At high speeds (highway speeds) the Volt’s gas engine does provide direct supplemental boost . Which means the Volt’s more dependent on gasoline – that elixir of all that is evil – than GM was claiming.

It’s not a grotesque lie – but it is a significant fib that GM’s been caught peddling.

Perhaps worse, the Volt’s real-world gas mileage (as is being reported by respected outlets such as Popular Mechanics) is reportedly averaging between 32 and 36 MPGs. Motor Trend says “high 30s to low 40s.”

Well, not so much – given you can buy a new Ford Focus (built with private funding, mind you) that gets 41 MPGs on the highway, without either the Volt’s complex What’s-itz under the hood – or its Lexus-esque $40k price tag.

Hell, a new Hyundai Sonata sedan manages 35 MPG – and it does it for about $19k, sticker.

So, history appears to be repeating itself. The Volt is looking to be a technically interesting but economically crippled-up money pit not likely to sell even with more than $7,000 in government (read: you and me paying for it) subsidies to buyers.

Maybe we should anyway. 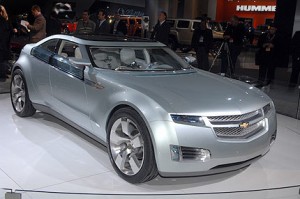