There’s a reason it’s known as the Empire State.

New York is outsized and audacious – not a place for the timid. So is the car named after the Big Apple. It’s a true giant that traces its origins all the way back to the 1930s, when it was introduced as an option package on the range-topping Imperial.

Features such as a FirePower Hemi V-8 gave it unprecedented power – while a wheelbase of 126 inches (by 1955) endowed it with proportions that assured it would leave an impression wherever it went. Literally. The thing was more than heavy enough to crinkle soft asphalt – or sink to its chrome doorsills in your neighbor’s grass if you dared drive it that far.

During the mid-late ’50s, Chrysler continued to develop the New Yorker as a kind of high-status automotive intimidator, with the optional Hemi-headed V-8 having swelled to 392 cubes and more than 300 horsepower (for ’57) feeding through a new and fully modern Torqueflite three-speed automatic operated via a toggle-style PowerFlite gear selector.

These cars could reach 60 in ten seconds – a fierce sprint for the time. Chrysler’s torsion bar front suspension, meanwhile, gave the car a nautical feel as it plowed through the corners, lurching this way and that.

1957 was also the year Chrysler’s new Forward Look styling – the brainchild of Virgil Exner – made its appearance. Fans of the movie, “Christine” will be familiar with this menacing apparation, especially the coupe. The New Yorker was essentially a dressed up Fury (subject of the movie) with more luxury but the same fearsome jutting tailfins and glowering front end treatment. Exner got the nickname Virgil Excess in part because of the over-the-the-top styling of the ’57s.

But, none can deny they were arresting cars – every bit “body by Plymouth (or Chrysler, as the case may be) and soul by Satan.” The Forward Look would last only four years, though, through the ’61 model year.

The mid-60’s versions of the New Yorker lost the outsized fins and (for a while) its optional Hemi V-8, settling into a temporary quiescence as Chrysler’s not-too-obstrepreous high-line large sedan/coupe. The rather ornate-looking “Electro-lumiscent” ’62-’64s (with the oddball “v” quad headlights) gave way to a more pleated – and low and wide – look for ’65-’68. Convertible coupes and wagons were available during this era, in addition to the big sedans.

New Yorker’s wheelbase actually got trimmed back by two inches during this period, too – though the car was still a presence to be reckoned with. A Golden Lion 413 cubic inch V-8 was available under the hood, too. At the time, a top-of-the-line Chrysler like New Yorker was considered the equal, or at least competitive with, the top-of-the-line luxury offerings of GM’s Cadillac division and Ford’s Lincoln division.

Then came 1974 – and an all-new New Yorker that was the automotive equivalent of WWII’s Battle of the Bulge. Like Der Fuhrer’s desperate throwdown in the winter of ’44, Chrysler decided to bring forth a New Yorker with more steel, more engine and more sheer bulk than any before.

It was the kind of car you needed to step back from by at least 10 yards to get into your camera’s viewfinder – nearly 232 inches long and sleek like the flanks of a B29 Superfortress. An upright, waterfall-style grille was flanked on either side by hidden headlight doors and thin-line vertical parking lamps. Sedans had frameless door glass and a pillarless look that was supremely elegant. In chocolate brown with a tan vinyl roof and “royal” tufted red velour upholstery (Corinthian Leather was optional) a fender-skirted,white-walled New Yorker was truly a regal spectacle.

Loaded examples easily cost in excess of $10,000 or about twice the cost of a family-priced Chevy sedan.

Lift the acre-sized hood and behold 440 cubic inches under a twin-snorkle air cleaner – the same basic engine as the highway patrol got in their stripped down Newports and Furys. And those were honest 150 mph cars – despite the aerodynamic profile of a cinder block and just a three-speed transmission with no overdrive. Think Bluesmobile – only with every power and creature feature Chrysler could throw into the mix, from vanity mirrors to a six-way power seat to tilt and telescoping (even leather-covered in ’77) steering wheel to a power radio mast and remote control trunk opener.

12 MPG on a good day, if you were lucky. But, who cared? It was a a life-affirming privilege in those dreadful downsized days to captain a New Yorker.

Unfortunately, Chrysler brought forth this behemoth at the absolute worst possible moment – just in time for the aftershocks of the ’73 OPEC oil embargo. Much as Americans still pined for full-scale pavement pounders, gas lines and escalating gas prices were forcing a reality check. External factors assured that the ’74 New Yorker would be not just one of the largest Chryslers ever but also among the last of its kind. Within five years, things would change significantly. Coupe versions of the New Yorker were also soon to be extinct. They were discontinued when the ’79s R Bodies appeared and the New Yorker got downsized. From ’79 forward, New Yorker would be offered in sedan form only.

1982 was the end of the line – not for the name, but definitely for the idea. The K-car based ’83 New Yorker was what the times demanded but this front-wheel-drive, four-cylinder powered compact was as far-removed from large-living New York as a walk-up flat in Jersey.

* The FirePower Hemi V-8 first appeared in the ’51 New Yorker (and Imperial), displacing 331 cubic inches and producing 180 hp. It was one of the most powerful production engines of its time.

* A St. Regis option package endowed the New Yorker with two-tone paint and other trim/cosmetic enhancements similar to the Cadillac Brougham package offered on Coupe deVille and other models.

* The 1974 New Yorker was first to offer the notorious Corinthian Leather made famous by the Cordoba in ’75. 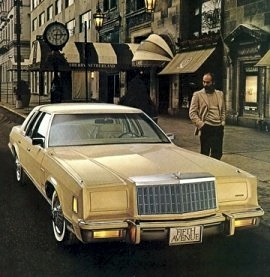