The Mazda Miata and the Ford Model T may not seem to have much in common. But in one important way, they both achieved something that very few other cars ever have.

Both cars left a high-water mark for sheer numbers built – and for longevity.

The Tin Lizzy had a Methuselean production run of almost 20 years (1908-1927) and was more or less unchanged during that entire time.

Fast-forward 60 years. In 1989, Mazda released the Miata. It has been going strong ever since – outlasting half a dozen would-be competitors, including the old Toyota MR2 and Celica, the Honda S2000, Pontiac Solstice and Saturn Sky (RIP).

And it is still going strong today – 22 years later.

That is an amazing feat.

It is also testimony to the greatness of the Mazda’s concept and design.

Here’s to not fixing what ain’t broke!

The MX-5 Miata is a two-seat, rear-wheel-drive compact roadster. It is available with a manual open-close cloth soft top or a power retractable hardtop.

The base Sport model with soft-top and six-speed stick starts at $23,110.

A loaded Grand Touring model with six-speed automatic and the retractable all-weather hardtop carries a sticker price of $29,650.

Last year, Mazda tweaked the Miata a bit by bumping up the output of the car’s standard 2.0 liter engine to 170 hp (from 167) and replacing the five-speed manual with a new closer-ratio six-speed. The bodywork and interior were also tweaked slightly.

Otherwise, the Miata’s the same as ever.

Every bit as fun to drive as those cars; maybe more so – because you don’t go broke doing it.

Capable of almost 30 MPGs on the highway (if you drive it right).

Like a great sport motorcycle or custom-tailored suit, this car won’t fit everyone.

This may be the final year before Mazda makes some great updates … or (possibly) fixes what aint’ broke.

The Miata’s 2.0 liter four-cylinder engine produces 170 hp (vs. 167 previously). A 3 hp uptick hardly seems worth mentioning, but what is worth mentioning is the new Miata’s higher redline (7,500 RPM, up from 7,000) made safely possible via a new forged crankshaft and fully floating piston wrist pins.

Some intake tuning has also been done to improve mid and upper-RPM breathing.

Also new: All Miatas (not just the pricier Touring and Grand Touring versions) come standard with a six-speed manual transmission – with carbon coated internal cogs to enhance shift speed/feel as well as the durability of the transmission.

With a bit more power on tap, a wider operating range and more favorable gearing through the six-speed transmission, the ’11 Miata’s 0-60 time drops just slightly to about 7.3 seconds, but thanks the higher redline, it feels noticeably quicker (more on this below).

Gas mileage is pegged by the EPA at 22 city/28 highway.

The Miata is not so much about high-horsepower or ferocious acceleration as it is about exceptional balance and agility – the quality the Japanese refer to as a rider who is one with his horse.

That pretty much sums it up.

A 0-60 time in the mid 7 second range is definitely not exceptional these days. Fact is a Camry V-6 is quicker – and a Mustang or Camaro will blow the Miata’s doors off.

But few cars ever make driving such an intimate, just-you-and-the-car experience.

The 2.0 liter engine sounds great (even better now, with revised intake tract tuning specifically designed to let the thing sing as the revs climb over 4,000 RPM) and the six-speed transmission is perfectly matched to it. While most automakers have gone to great lengths to cull all signs of mechanical life from their drivetrains and turn them into electric car-quiet appliances, the Miata will take you right back to the summer of ’69 – the good stuff, without the smelly Hippies. Throw the top back (the power hardtop is neat but this car doesn’t need it), point it down the road and just make tracks.

Available Bilstein shocks provide increased compression damping, which eliminates some of the bounciness the previous car was prone to when it encountered a dip in the middle of a fast corner. It now squats and settles with the firmness of an SCCA-prepped weekend club racer. Some of the largest/most aggressive tires ever installed on a factory-built Miata are now available: P205/45R-17 Bridgestone Potenzas. These can be fitted to beautiful new-design 17-inch BBS wheels.

Recaro sport buckets are available as well, plus various dealer-add ons such as a body kit, etc.

Competitors like the BMW Z4 (and the recently cancelled Honda S2000) have done their utmost to out-Miata the Miata, but there’s only one original. The Z4 is quicker; the S2000 (with its almost 10,000 RPM powerband) felt more race car-like. But the Miata is still the best-balanced mix of back to basics sports car fun and everyday reasonabless. It is affordable (the Z4, which starts at $46k – isn’t), comfortable to drive in stop-and-go traffic – and plausibly practical. It gets good gas mileage, is known to be very durable, has high resale value, doesn’t require much in the way of expensive maintenance…

For ore than 20 years now, Mazda – wisely – hasn’t seriously messed with the Miata’s classic shape. Just a few minor updates along the way – such as a new trunklid spoiler, wider front and rear ends (with new design headlights) to cut down on wind resistance and cabin noise infiltration at high speed (the drag coefficient, or CD, drops to .032 for the retractable hardtop model).

These changes have been evolutionary and so are very subtle. Like the changes over the years to another Automotive Icon, the old Jaguar XJ-series sedan – which looked more or less the same from the late 1960s all the through the early oughts. The result is that Miatas age very well; an ’89 model still looks current – and the 2011 model will still look great 20 years from now.

Yeah, the Miata’s trunk is handbag puny – 5.3 cubic feet. It comes with the deal when you buy any two-seat compact roadster.

But Mazda built numerous hidey-holes and cubbies into the car’s cabin, including a bin between the driver and passenger seatbacks (this is where the pull release for the fuel filler door is located, too) and four small but serviceable cup holders.

The all-weather hardtop version (which only adds about 70 pounds to the car’s low 2,480 lb. curb weight) is also the least expensive retractable hardtop roadster currently available. VW’s Eos, for example, is the next-most “affordable” retractable hardtop on the market – and it starts at $32,940. And the front-wheel-drive, two-plus-two Eos isn’t even in the same league as the Miata as far as being a sports car goes.

Miatas are known to be hard to kill, even when abused. And many do get abused – if weekend racing is defined as abuse. They can be raced all weekend long, then driven to work every day the next – without trouble, year after year after year. I have a friend who does exactly this with his ’92 – and that car is still his daily driver. He’s had to replace the tires a few times (and the clutch once).

You rarely hear about anything major breaking – even cars with high mileage that have been run really hard.

To my mind, it is much easier to rationalize a Miata purchase than the purchase of a high-priced, fast-depreciating (and high maintenance and expensive to maintain) BMW, Lotus or similar. No offense. The Z4 and the Elise are great fun. So is the Porsche Boxster. But buying one of those cars is like acquiring a 21 year old girlfriend when you’re 55.

There will be costs involved.

But laying out $23k for a Miata is as prudent as eating three servings of vegetables per day. It makes for a perfect low-cost commuter car – and it’s a helluva lot more appealing than a Prius.

For a small car, it does well in crash tests – compared with other small cars. But your best bet is to avoid getting into a test of physics with large cars.

No question, there are other fun-to-drive two-seat, RWD roadsters on the market. But not one can match the Miata’s low entry price point, known over-the-road value and iconic status.

It truly is the pick of the litter. 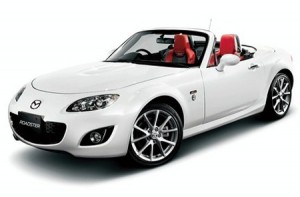