Interested in acquiring a motorcycle that’s also a veteran?

An option you might consider – one that’s not well-known outside of the collector bike hobby – is to shop for an ex-police/former military bike.

Examples include the famous Kz1000p – the bikes Ponch and Jon rode in the ’70s TV show, CHiPs – and the similar-in-layout big-bore Harley cop/MP bikes you often see escorting VIP convoys – or running radar on the Interstate.

There are also smaller machines like the 883 Sportster “police” – and even dual sports/adventure tourers like the Honda XL250 or the larger Kaw KL650 currently in use with the U.S. Marines (some with diesel power, too).

After their “tour of duty” is over, these bikes are typically sold off at auction; or they can be found the usual way – via print and online classified ads (details follow below).

Some – like the legendary Kz1000P can be amazingly affordable. Right now, several nice ones are listed on eBay and Craigs List for around $3,000.

Others – like ex-duty Harleys – usually cost more but can still be a deal compared with a new civvie equivalent.

Plus, there’s no putting a price on the history these bikes have. They are not just fun to ride; they’re great conversation starters, too.

The smaller units can be a good choice for a new rider, or someone who just wants a bike that’s easier to handle.

As former fleet machines, they’ve also likely been serviced regularly, something that’s hit or miss with a bike that’s been in private hands its whole life.

Let’s look at some of the possibilities:

You’ve almost certainly seen one of these on TV or in the movies. They were the uncredited stars of CHiPs, and “Dirty Harry” Callahan escaped on one in The Enforcer.

Though Kawasaki stopped selling the civilian version (Kz1000) in 1981, it continued to make the police-duty version of the big Zed all the way through 2005. Many are still in service with motor units all around the country.

Current asking prices range from around $1,500 or so for a well-used but still restorable one to around $7,000 for a pristine example, possibly still wearing its police-spec Dunlop run-flat tires!

The Kz1000P is shares the same basic layout as the standard Kz1000, but in addition to the famous 1000 cc DOHC four-cylinder engine, police versions feature full fairing with emergency flashers (to be street legal, you must change these over to clear/yellow from red/blue), radio (street legal!) and factory hard bags. Some have running boards – and most all the accessories/parts that fit the standard Kz series will fit the police version, too.

Powerful and tough; big Kaw in-line air-cooled fours are legendary for their durability.

These are fast bikes; capable of 140 mph top speeds.

Factory seat is solo-only. (But can be replaced with aftermarket seat).

This is a big, powerful bike; not for beginners.

Harder to find east of the Mississippi. (These bikes tended to be used more in places like CA and AZ.)

Big Harleys have been used by civilian police and military police for decades – all the way back to the 1930s, at least.

Depending on the year, the bike will be powered by either the Evolution or (newer) Twin Cam 88/96B or 96A V-twin engine. All are air-cooled designs, so no hassles with radiators, but the newer engines feature twin counterbalancers to smooth out the big twin’s famously lumpy idle. Later-models also feature six-speed transmissions and a trick (and police bike-specific) cylinder cutout feature that lets the bike run on just one cylinder during prolonged idle/parade use.

In the past couple of years, some departments have also been using the smaller/lighter 883 Sportster, which is better suited to urban/city environments – and also the Buell XB12, for on and off-road use. The Sporty is ideal for smaller stature riders, due to its lower seat height and lighter weight. But like its bigger brother, police versions usually come with sidebags and a front fairing.

The big cruisers seem to be going for between $6,000 and $12,000 or so, depending on year and overall condition. That’s still a decent deal on a full-size Harley touring bike.

Readily available at police auctions or through private/retail sales.

Even less of a beginner’s bike than the Kz1000P.

This one’s off the beaten path… literally.

In 2005, the Marines ordered up diesel-powered versions of the Kaw KL650 dual sport for scout/recon work in places like Iraq and Afghanistan. The diesel engine – which can also burn kerosene/JP8 jet fuel – probably isn’t more durable than the standard 4-stroke single cylinder gas engine, but it is capable of an incredible 200 MPG – vs. about 55 for the gas version. With a fuel capacity of about three gallons, the bike’s good to go for an incredible 600-plus miles without a pit stop.

Its high torque is a big advantage when slogging through sand, deep mud or heavy snow. Another HD feature of the military-spec. KLR650 is the battery, which is of the absorbent matt type that can’t leak – even if the case breaks – because there’s no liquid acid sloshing around inside.

Diversified Technologies of California did the engine swap for the USMC.

Very pricey; the current contractor that does the conversion to diesel charges DOD a reported 2-3 times the current retail price of a civilian (gas-powered) KLR650.

Hard to find; not many built and the handful that have been put out of service have probably already found new homes.

Check around in your area to see whether local/state police have any “motor” (motorcycle) units; if they do, then eventually those bikes get sold off to the public at auctions just like ex-cop cars. Call the public information office and ask ’em when and where.

One great resource is Craigslook.com (note, not Craigs List). Craigslook.com is a national search engine for every local/state craigslist. If you type in “Kz1000 police” it will give you a roster of every single ad placed for that bike in all the Craigs List boards around the country.

Walnek’s Classic Cycle (www.walneks.com) is a great resource, too. Or, just try Google. In addition to private party sales, you’ll often find dealers (in the case of HDs) that are selling ex-cop bikes; sometimes, these dealers serviced the bikes for the local department during their time as LE vehicles

Check online (type in “military,” “auction” and “motorcycles”) and you’ll find numerous places that sell former military vehicles and equipment of all types, including bikes. A good place to start is http://www.milweb.net/classifieds.php?type=5 . Ebay is another way to locate these bikes. 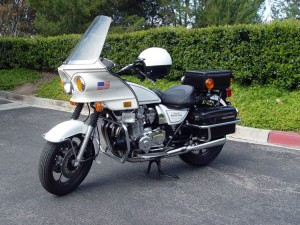